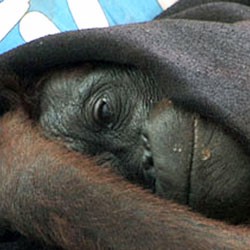 Want a preview of the Vermont International Film Festival (October 19 to 28)? Next Wednesday, head to the top of Burlington’s Church Street to watch trailers of films to be screened at VTIFF, plus a 40-minute movie called Green. It’s a narration-less documentary about an orangutan falling victim to deforestation in Indonesia.

Formerly hosted by the Palace 9 in South Burlington, VTIFF has been establishing a stronger presence in Burlington’s downtown, where most fest films will be screened this year. This Wednesday, August 29, VTIFF wraps up its summer series of Global Films in the Park — that’s City Hall Park — with a program of short docs and narratives. Among them is “Living Juarez,” a portrait of a Mexican neighborhood blighted by the drug wars, directed by Vermont transplant Alexandra Halkin. She runs the Burlington-based Americas Media Initiative, a nonprofit that works with Cuban-resident filmmakers and screens their work in the States.

While the main action may be in the Queen City, this year the Northeast Kingdom — and nos amis Québécois — will also get a taste of VTIFF. To celebrate two centuries of friendship between the U.S. and Canada, the festival will host a special three-day showcase at the border-straddling Haskell Free Library and Opera House in Derby Line, organized in partnership with the consulate general of Canada in Boston. VTIFF won’t announce its big-ticket opening and closing films until next week, but it has released a list of Vermont-made films to be featured. Among them are new works from George Woodard, Elizabeth Rossano, Michael Fisher, Tim Joy, Alison Segar and Mira Niagolova — who chronicled local immigrant experiences in her documentary Welcome to Vermont. Talk about stories you’re unlikely to see at the multiplex.

Vermont International Film Festival Preview: Wednesday, September 5, 8 p.m. at the top of Church Street, Burlington. Free; bring a chair if you can.

VTIFF previews and short films, mostly about cycling, will be screened every hour during the South End Art Hop, Friday and Saturday, September 7 and 8, at Maglianero, Burlington.