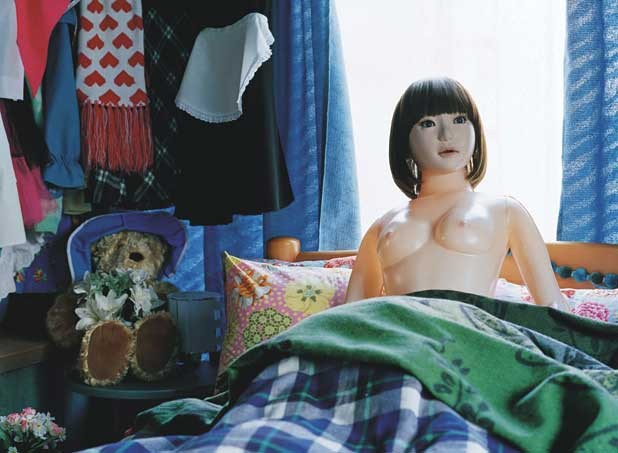 Mark your calendars: The Vermont International Film Festival starts a week from Friday at Palace 9 cinemas in South Burlington. Now celebrating its first quarter-century, the “world’s oldest human rights and environmental film festival” kicks off 10 days of screenings with the Vermont premiere of Wretches & Jabberers, a road-movie documentary with a local angle. Director Gerardine Wurzburg, who made the Oscar-nominated short “Autism Is a World,” followed two Vermonters, Tracy Thresher and Larry Bissonnette, as they traveled around the world in an effort to gauge and change public attitudes toward autism.

We’ll have more fest info in this space next week, but here are a few highlights:

Air Doll is a Japanese flick about a blow-up girlfriend that comes to life. Twenty-one-year-old Québecois director Xavier Dolan catapulted himself to Cannes with I Killed My Mother. A rock star’s slacker son tries to redeem himself in an Okie karaoke competition in The Rock ’n’ Roll Dreams of Duncan Christopher.

Director Gregory Everett will discuss 41st & Central, his film about the Black Panthers. Barbershop Punk chronicles a landmark Internet free-speech case. City of Borders visits Jerusalem’s only gay bar, where Israelis and Palestinians coexist. Marwencol delves into the world of an outsider artist, and Picture Me explores the equally strange world of fashion models.

Plus, as always, VTIFF has local films, including a documentary about local biologist/author Bernd Heinrich and another about Freegans. Stay tuned for updates.

Technically, those are digital presentations of films, he adds, since “we can’t fit film projectors in the basement.”

But the space can fit 50 people — or 49 spectators plus a bartender. They occupy 18 movable beanbag chairs with tables made of glass-topped film reels, 15 traditional theater seats, a handful of barstools and — to complete the lounge-like atmosphere — a faux-leather couch. Everyone has a view of the screen, which measures more than 100 inches diagonally and is accompanied by, says Reynolds, a “very impressive” sound system.

The setup may not be huge, but it gives the Savoy more versatility, says Reynolds; now the theater can program “films that in the past we didn’t have time to show.” This week, Cairo Time occupies the basement while Get Low is upstairs. Later this month, look for Fatih Akin’s Soul Kitchen and the acclaimed doc A Film Unfinished, which dissects a famous Nazi film about the Warsaw Ghetto to reveal its layers of propaganda.

In the future, says Reynolds, he and owner Terrence Youk may use the second screen for big-draw movies on weekends and devote it to special events and screenings on slower weekday nights. “People have suggested things like mystery-movie night or a movie book club,” he says. An open mic night on Tuesdays is a strong possibility.

“We’re trying a lot of things to see what interests people,” Reynolds says. He vows that “once you see the space, you’re going to want to spend time down there. It came out better than anyone expected.”

If you want to know what theaters are losing or gaining by going digital, stop by film historian Bruce Posner’s 2010 Ciné Salon film series, which starts at the Howe Library in Hanover, N.H. this Monday, October 18, at 7 p.m. This year’s theme is the “passing of film as film, that soon to be dead medium of creative expression used throughout the 20th century” — a transition Posner will illustrate by contrasting films projected from reels with standard-def DVDs.

Want to support Vermont’s grassroots film industry? This is the weekend to do it. On Friday, October 15, at 7 p.m., the Barnard Town Hall hosts a “musical fundraiser” for Green Blooded: Vermont at a Crossroad. Director Teo Zagar describes it as a documentary “about the grassroots movement of people taking ownership over the production of our collective survival.” Rural Vermont is sponsoring the $12-15 event, which includes a teaser for the film, a Q&A, and music from Bow Thayer & Holy Plow.

Up north, local films take over the Hardwick Town Hall on Friday and Saturday. If you haven’t yet seen George Woodard’s homespun period adventure The Summer of Walter Hacks — which is limited to festival screenings by rights issues — here’s your chance. It screens Saturday, October 16, at 8 p.m. for $6. Older films by Vermonters Meredith Holch, John O’Brien and Nora Jacobson are also featured. For info, call 456-8708.