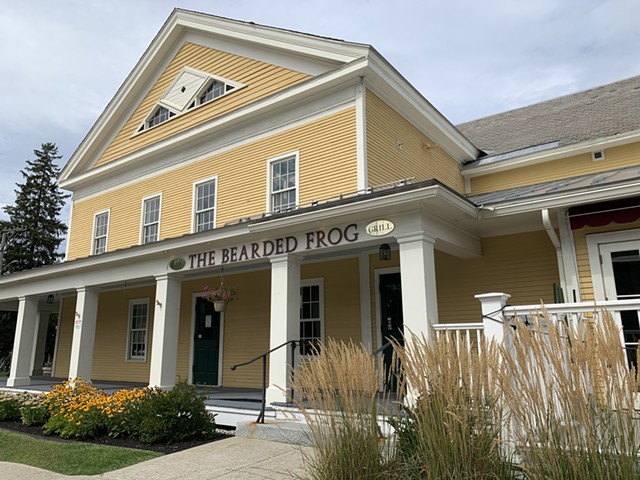 The Bearded Frog served its final meals on August 18. The Shelburne restaurant is unlikely to reopen, according to Dickie Austin and Andrea Cousineau, co-operators for the restaurant’s owner, Vergennes Restaurant Group. The two will continue to run the group’s Black Sheep Bistro and Park Squeeze, both in Vergennes.

Austin, 43, director of operations, and Cousineau, 39, executive chef and general manager, told Seven Days by phone that the lingering effects of the pandemic, including staffing challenges, made it impossible to keep the Bearded Frog open.

Both were mentees of the late Michel Mahe, a chef and entrepreneur who helmed a small group of restaurants that also included the now-closed Lobby in Middlebury and the Bobcat Café & Brewery in Bristol. The latter is now owned by Erin and Sanderson Wheeler, whom Mahe also mentored.

The Late Michel Mahe's Restaurants Are Still Cooking
By Suzanne Podhaizer
Food + Drink Features
“When the pandemic hit, of the three locations, the Frog took it hardest,” Cousineau said, noting that the styles, menus and locations of the Vergennes restaurants better supported steady takeout business.

Cousineau, who manages the restaurant group’s shift schedule, said she was dreading summer’s end “like a cliff coming.” That’s when employees of high school and college age — such as Mahe’s son, Jonah, 19, who cooked at the Bearded Frog during vacations — leave or cut their hours significantly.

“We’ve been actively looking for staff,” Austin said, “but when a couple staff members decided to transition away … that was what tipped [the balance].”

Austin is working to combine point-of-sale systems so that any unredeemed Bearded Frog gift certificates can easily be used at Black Sheep, the group’s French-inspired bistro, and Park Squeeze, which offers a casual menu of burgers, flatbread, rice bowls and house cocktails.