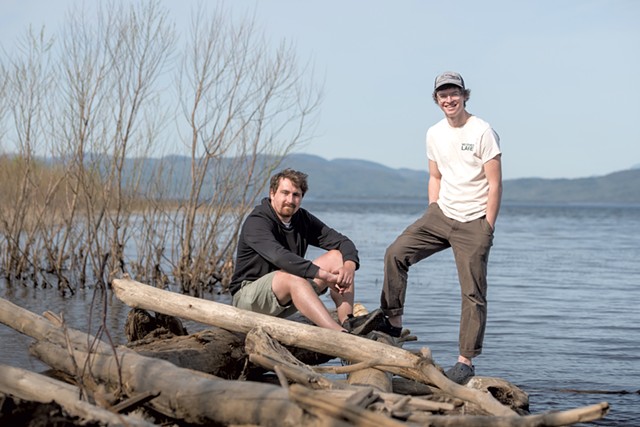 Filmmaker Jordan Rowell was chatting up an elderly fisherman when I met him last week at Derway Island Nature Trail near Lake Champlain in Burlington's New North End. The grizzled old-timer seemed to know a lot about the history of the area, offering plenty of insight to Rowell, a 26-year-old University of Vermont student. The younger man listened intently, asking questions with genuine interest.

It was like stepping into a scene from Rowell's recent documentary, "No Other Lake," an ecological think piece about Lake Champlain that he cocreated with filmmaking partner, fellow Essex native and lifelong best friend Duane Peterson III. In it, Rowell kayaks the entire length of the lake from Whitehall, N.Y., to the Missisqoui Bay in Québec.

Throughout the two-week journey, which was shot in August of 2021, he also embarks on a listening tour. He interviews scientists, educators, eco-warriors, recreation enthusiasts, farmers and others, each sharing their perspective on lake conservation and stewardship. He asks how regular people can protect the lake from ecological destruction, such as invasive species and poisonous cyanobacteria, to preserve it for future generations.

In case you haven't heard, the lake isn't doing so hot. The Lake Champlain Basin Program, a conservation organization that partially funded the film, published in its 2021 State of the Lake report that "phosphorus concentrations in Lake Champlain's shallow bays are often above [normal] limits. Excessive phosphorus has a significant impact on a lake's ecosystem and is a contributing cause of cyanobacteria blooms."

"If we're going to solve the problems facing the lake, we have to start with our relationship with the place." Jordan Rowell tweet this

At just under 40 minutes, "No Other Lake" doesn't offer a definitive formula for saving Lake Champlain. Instead, it gives people a reasonable starting point: Get connected with your environment, literally.

Hoping to capture a bit of the experience Rowell had while making "No Other Lake," I asked him to take me out on the water. "If we're going to solve the problems facing the lake, we have to start with our relationship with the place," Rowell said as we paddled a canoe from the mouth of the Winooski River toward the Colchester Causeway.

"We humans have seen ourselves as apart from the natural system instead of a part of it for too long," Rowell continued. "What does it mean to shift that relationship?"

An experienced outdoor recreation educator and enthusiast, Rowell moved around the United States in his early twenties, working in various outdoor rec and education capacities. Currently a third-year student at UVM's Rubenstein School of Environment and Natural Resources, he had a brainstorm during lecturer Chris Brooks' course on natural history and human ecology.

While sitting in class, he texted Peterson to enlist him as editor and director of photography. Peterson, 28, studied film at Chapman University and the University of California, Santa Cruz. When Rowell pitched the film, one of Peterson's first questions was: Who's the antagonist? Who's to blame for the phosphorus-activated cyanobacteria blooms and other problems plaguing the lake?

That line of questioning quickly dissolved as they began work on the film.

"That was me ... thinking that this film would reveal some scandalous issues or point the finger at the problem," Peterson told me while gazing at the Adirondacks at Burlington's Perkins Pier. "I don't think that's a productive way of telling the story of the lake."

Instead, the filmmakers let the landscape and their interview subjects do most of the talking. Incorporating footage from a high-quality video camera and a GoPro, plus drone work from collaborator Ryan Malle, "No Other Lake" gives the viewer intimate and comprehensive views of the lake and Rowell's journey.

As he says early in the film, Rowell is not an avid kayaker and had only been in one a half dozen times. He also didn't train for the journey, focusing more on setting up financing, working out some of the technical aspects of the film with Peterson and setting up interview subjects.

For portions of the trip, Peterson filmed while traveling alongside Rowell in an inflatable motorboat they purchased for the film. Other times, Rowell paddled alone. He recorded himself with the GoPro, affixing it to his kayak and occasionally his paddle, dunking the viewer into the water. Composer Adam Wolinsky's score envelopes the film in a dreamy softness as Rowell glides past wetlands, bays, beaches and rocky cliffs.

Rowell's interview subjects don't try to solve the problem. Instead, they offer various perspectives that all lead back to the same conclusion of connectivity and stewardship versus a resource-taxing, self-centered mindset.

Environmentalist Bill McKibben talks about the importance of having "long, deep, real conversations with people." Abenaki Chief Don Stevens ponders the connectivity of the local watershed and the people who use its resources. Saint Michael's College instructor of environmental studies and sciences Trevien Stanger talks about how societal despair can lead to the biggest moments of change.

Brooks, the UVM lecturer, advised Rowell on the film. "Honestly, it's such an ambitious project for an undergraduate," he said. "I think it's going to be such a valuable resource for many years."

Aside from raising awareness about issues facing the lake, Rowell and Peterson hope that "No Other Lake" will be used as an educational tool. They provide educators with fact sheets, discussion starters and project ideas to use in conjunction with the film.

The documentary "really provides the real-world application of something students have seen before, they've touched, they've been to," said Katherine Lee, assistant director of Two Roads Academy in Essex Junction, a private school for students with behavioral and emotional disorders. She said that students often question the importance of a subject or lesson if it doesn't have an overt connection to their own lives.

"You really can't say that with this topic and this movie, because it is affecting them and their families and their community," she continued.

Currently, "No Other Lake" isn't streaming, though Rowell and Peterson hope it will someday. First, they're submitting it to film festivals, including the Wild & Scenic Film Festival. They're also touring it around Vermont in a series of live events, including on Friday, May 27, at the Worthen Library in South Hero.

As Rowell and I paddled back to shore after spending nearly two hours on the lake, I asked him whether the film is activism.

"That's kind of a loaded term," Rowell said. Ultimately, he said, the film is more about education than a call to a specific action — though there are many things people can do that align with his vision of people becoming more connected to their land and natural resources: Join a conservation group, steward other areas of the Lake Champlain Basin, conserve your land if you own property — even, corny as it sounds, plant a tree.

"If we want to protect water, we have to protect land first," Rowell said.

He certainly inspired me to get back on the lake. Gliding along the water makes you feel connected to it in a way that gazing at it from land cannot.

"No Other Lake" screens on Friday, May 27, 8 p.m., outdoors at the Worthen Library in South Hero. Free. Learn more at lakechamplainfilm.com.