Seven Days' writers can't possibly read, much less review, the boatload of books that arrive in a steady stream by post, email and, in one memorable case, a flock of trained parrots. So this monthly feature is our way of introducing you to seven recent books by Vermont authors. To do that, we'll contextualize each book just a little, and quote a single representative sentence from, yes, page 32.

Balanced Effectiveness at Work: How to Enjoy the Fruits of Your Labor Without Driving Yourself Nuts

"Without clear expectations, shared assumptions, and defined commitments, we often get confused about where work is at, where it's going, and who's responsible for what."

In straightforward, commonsensical language, Brown offers perspectives on and tips for maximizing his readers' effectiveness and enjoyment in the workplace. A business consultant who's also an expert gardener (and former Seven Days contributor), Brown proffers on-the-job scenarios that will be uncomfortably familiar to anyone who's ever worked in an office — and suggests frank, simple methods for making them less awkward and more rewarding. Lessons on how to set boundaries, how to turn worry into productivity and how to wade through managerial BS — they're all here.

The Eastern Question: A Geopolitical History in 108 Maps and Drawings

"[Fourteenth-century historian Ibn Khaldun] speculated on what caused independent tribes to submit to a ruler to whom they were not related by blood, introducing the concept of the legitimacy of power: a three-stranded rope in which are intertwined religious legitimacy, dynastic legitimacy, and farrh — the knack for winning battles."

Danforth, who lives part time in Townshend, is a former publisher and letterpress printer. The handsomest volume to cross Seven Days' desks in a while, his large, learned, lively and amply illustrated text investigates the cultural and political divide that has long separated East and West. The book's scope takes in everything from the rise and fall of the Ottoman Empire to the incidents of September 11, 2001, slicing a broad, informed path through eternal currents in world history.

"I place a handsaw below her chin as the blade pierces through the neck." (from page 31)

Just in time for Halloween comes the winner of this month's Truth in Titling award. Kapitan, a resident of Danby, isn't messing around when he warns the young and the squeamish away from flipping through Darkness' pages. Inspired by the goriest of horror films, Kapitan writes, in his milder moments, of decapitations, madness and murders — which, when you get right down to it, is the stuff of most of world literature. Darkness is no gorier than Hamlet, really.

Seven Days has corresponded with Kapitan and is pleased to report that he seems to be a nice, well-adjusted fellow.

"When he was satisfied, she said, 'I keep hearing Grandpa's voice, how he always said that once you solved the design you had to get a patent before anyone else saw it, or they'd pirate it right off and you'd never be able to prove you invented it.'"

The device at issue in Lew-Smith's historical novel is a flax-milling machine that has the potential to make or break the fortunes of a frontier family. Set in early 19th-century America, The Clever Mill Horse — Book One in a promised series — employs the fictional story of Ella, its spirited protagonist, to explore the historical forces that shaped a young country. Lew-Smith is well qualified to write a book in which plant fiber plays a central role: She's also a vegetable breeder at Wolcott's High Mowing Organic Seeds. 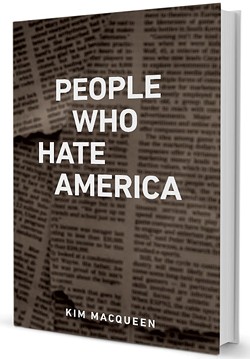 "You could just ask him things point-blank, things you had to pussyfoot around with the mayor and the secretaries." (from page 31)

The race riots in Newark, N.J., in the summer of 1967 provide the backdrop for MacQueen's second novel. Steeped in the ways of ziti-chomping heavies and interracial housing-development drama, People Who Hate America uses fictional characters to root around in a complex and regrettable chapter in American history.

"Semi-self-published," in this case, refers to Champlain Books' status as a branch of the Champlain College Publishing Initiative, of which MacQueen is managing editor.

"As we lay in bed at night, sprawled in the dark, exhaustion chewing at my limbs like an infestation of persistent mosquitoes, Hal talked maple, maple, maple."

A graduate of Marlboro College, a sugarmaker in the Northeast Kingdom and (we're proud to say) the calendar writer for Seven Days' sister publication Kids VT, Brett Ann Stanciu is Vermont through and through. The same can be said of her first novel, Hidden View, which, as the quotation above indicates, is set in the milieu of Vermont's signature agricultural product. Stanciu's literary maple syrup is flavored with unusual extracts: family drama and complex romantic entanglements. In 2012, Stanciu published an excerpt of the then-in-progress novel in Seven Days; now completed, the book comes out on November 6 from Brattleboro-based Green Writers Press.

"What I learned from all of this is the very reasonable truism that when you don't like the person your adult child is dating, you should just set your house on fire." (from page 31)

The cover of Good Grief — a pair of red muck boots embedded in a snowbank — makes a visual reference to the similarly be-booted cover of Ellen Stimson's first book, the best-selling Mud Season. One of the most successful ventures in the cottage industry of Books About People Who Move to Vermont and Draw on Its Rugged Beauty and Charming Laconicism to Learn Something Important About Themselves, Mud Season paved the way for Good Grief, in which the author continues to write with Erma Bombeckian sass about the nutty antics of her relocated family.

The original print version of this article was headlined "Page 32: Short Stops in Seven Volumes"