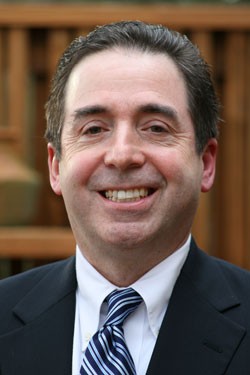 Not every public intellectual has embraced the buy-local concept, however. Take Russell Roberts, a self-described “pretty hardcore” University of Chicago-trained economist who argues that supporting local agriculture isn’t a viable way to challenge a profit-driven market economy.

Roberts is no fringe critic. A National Public Radio commentator who has written for The New York Times and the Wall Street Journal, he has also penned three economics-themed novels. His latest is The Price of Everything: A Parable of Possibility and Prosperity, which stars a Cuban émigré tennis prodigy, a renegade Stanford provost and a megacorporation called Big Box. Newsweek called it “both didactic and romantic.”

On Wednesday, October 29, Roberts debates McKibben on the question “Buy local or buy global?” at the University of Vermont. Sponsored by the Janus Forum, it’s the first event in a new series that explores free-market issues and will be moderated by St. Albans Messenger editor and publisher Emerson Lynn. Last week, Roberts spoke with Seven Days by phone from Virginia.

SEVEN DAYS: You’ve said that the buy-local movement has a “superficial appeal.”

RUSSELL ROBERTS: The emotional, nonmonetary appeal of “buy local” is very clear. It’s nice to buy things from people you know, and often that interaction of shopping and trading with people you know enhances the quality of life.

But there’s a cost to it, and when we say, “Let’s buy the local apples rather than the apples from New Zealand,” the cost is hidden, because apples are only a very small part of our economic life. If we tried to replicate that strategy over a wide range of products, the cost would be much more apparent.

SD: But a lot of people would say the idea of “true environmental cost” is diametrically opposed to your idea about true cost.

RR: It’s a good observation. Rather than saying the true cost, it would have been better for me to say the full cost. Right now, if you buy local produce instead of produce that comes from across the country or across the ocean, the cost is pretty clear: It’s a little more expensive, usually. Sometimes the quality is higher, so you say, “Well, I think it’s a bargain after all.” Sometimes it’s not, so you say, “Well, it’s worth it, ’cause it’s local.”

I don’t know if people think through how those costs would add up if you tried to buy more locally than just food . . . I think it’s a question of magnitudes. There’s no doubt that when you make economic decisions based just on price, you’re not getting the full picture, which is the environmental critique. But I think it’s also true that when you purchase one item or category of items, such as food, locally, you don’t think about what the full cost would be if you did that more aggressively across a wider range of products.

SD: You’ve said self-sufficiency is the “road to poverty.” Does that relate to this discussion?

RR: Absolutely. That’s a quote from my first book, The Choice: A Fable of Free Trade and Protectionism . . . I think the word self-sufficiency has an emotionally attractive ring to it: We don’t want to depend on others; we want to be self-sufficient; we certainly want our children at some point to grow up and become self-sufficient, rather than depending on us as parents. So self-sufficiency is generally seen as a goal, but in economic activity and in trade generally, no one really has self-sufficiency as a goal.

SD: To be fair, Bill McKibben and Vermonters who advocate for self-sufficiency aren’t advocating for full self-sufficiency, but for what they view as a healthy balance of sustainable systems and economies of scale.

RR: As an individual, I might decide — as, say, the Amish have — that I want to make a set of decisions that are very different from my neighbors’; I’m going to forgo certain technologies and practices that lead to higher material well-being on the grounds that that’s a bad trade. And every individual makes those calculations. So, for example, very few people take the job that pays the most. We all understand that. We all understand that there is a trade-off between our material well-being and the quality of our life, measured in all kinds of ways . . .

But when we interact politically at a higher level beyond ourselves and make restrictions, regulations and legislation about the ability of people to interact with each other, we have to decide: Who’s going to make those rules? . . . My belief is that every individual should be free to pursue the level of local-versus-global that that person finds appropriate for their well-being. The question is: Are you also going to determine it for others?

SD: Speaking of policies that go beyond the individual: The State of Vermont helps schools purchase locally grown food.

RR: There’s a separate issue we haven’t talked about: political power. It’s inherent in a public school system that numerous decisions get made with strong political influence and not so much feedback from the customer . . . Now, a private school also makes those decisions without necessarily consulting the customer . . . but of course you’re free to opt out . . . I want to minimize the amount of political power in the hands of people who are spending other people’s money rather than their own, because they tend to spend it less carefully.

SD: You’ve said there is no “inherent value” in the buy-local concept.

RR: Let me make it clear what I should have said: I don’t think there’s any economic value to “buy local”; there is psychological value, aesthetic value. But I think some of the defenders of “buy local” have this idea in the back, or the forefront, of their minds that it’s not just nice and pleasant and pleasing to the quality of life to buy stuff from your neighbors, it also makes good business sense . . . Not surprisingly, local merchants want you to buy local, and they’ll often argue that “the money stays in town.” I think that’s a mistake, and I think to use that argument is fallacious.

SD: The Vermont Agency of Agriculture, Food and Markets seems to be convinced that buying local is of economic benefit to local residents.

RR: It’s not uncommon for government agencies to do the bidding of special interests. We don’t like to think of it that way, but I’m not surprised that the department of agriculture in Vermont is very responsive to Vermont farmers.

SD: So you’re saying the “special interests” are the small organic farmers?

RR: Yeah, and I think you could say the same thing about California farmers . . . I would suspect that the small farmers of Vermont spend a disproportionate [amount of] time [lobbying], so I’d expect them to have a disproportionate impact.

SD: What about compared to the impact of, say, large agricultural interests?

RR: Large farmers have even more impact on the political process . . . Our agricultural policy in the United States, writ large, is designed to make farmers rich at my expense and yours, and I expect there’s some of that going on in Vermont, although it might not be pleasant to say so.

SD: It seems you and Bill McKibben disagree on what prosperity is. In his book Deep Economy, McKibben suggests that an economic paradigm rooted in growth isn’t healthy. You’re saying that we’re better off than we were 100 years ago.

RR: I think this’ll be an interesting part of the conversation. I know that Bill McKibben is skeptical about the connection between growth and happiness, and I don’t make any grand claims for growth or material well-being producing happiness, either . . . For me, there are many benefits yet to come from economic growth, but I’m not tied to growth per se. I think there’s probably a little more agreement there between the two of us than might first meet the eye.

SD: Global warming, degradation of topsoil, loss of genetic diversity — these are signs, McKibben might point out, that our old notions of prosperity aren’t as rosy as we thought.

RR: There are a lot of consequences of growth that we as consumers or investors or entrepreneurs do not anticipate. Many of them are negative . . . but I think there’s a long list of positives . . .There’s a certain viewpoint, which says, “It’s all empty, you’re just trying to get ahead of your neighbor” . . . I reject that kind of calculation: I don’t think that’s what material prosperity is about . . .

I think most measures of nonmaterial well-being are dramatically higher than they were 100 years ago, including many environmental measures, the obvious examples being the skies of Pittsburgh and the forests of the Northeast —

SD: What about the skies in Beijing?

RR: Well, [the Chinese are] in a different place in the economic growth pattern. The question is whether their environmental degradation . . . will have spillover effects that we will be punished by. It’s an interesting question, and I don’t know the answer.

The legitimate question is whether global warming could reach a point where the quality of life would be so severely compromised [that] we all agree it would be a mistake to keep growing. We haven’t reached that point yet, clearly. We may be irrevocably on the path to it, as many people have argued — and that, I think, is a different claim than the ones I’ve been answering so far.

SD: McKibben would argue that, last year, a NASA scientist found the atmosphere can’t sustain levels of atmospheric carbon dioxide above 350 parts per million. We’re currently over that threshold.

RR: I’m not convinced that that estimate is reliable, but perhaps it is. I’m not an authority on it . . .

SD: Do you have any food preferences?

RR: In our family, we have four kids, and of the six of us, two are vegetarians who weren’t five years ago. We definitely buy more organic food than we did 10 years ago because it’s more available . . . but I’m not doctrinaire on any of that.

SD: Do you ever garden?

RR: I’m not much of a gardener. I like trees a lot; I’m into trees big-time, and I like old-growth forests a great deal.

RR: Yeah, trees — hey, something else we have in common. It’ll be interesting to see how much common ground we have when we face off. I don’t know how much there is, but I think there’s more than might meet the eye.