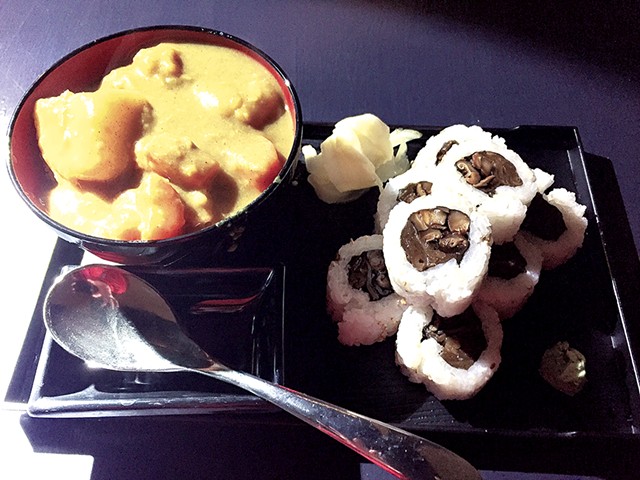 The Old North End has a new restaurant with the March 1 opening of Shinjuku Station Café at 260 North Street in Burlington. The wife-and-husband team of Mao and Peter Hartwell own the Japanese eatery.

Peter Hartwell ran the sushi concession at City Market, Onion River Co-op for 12 years; Mao joined him six years in, and they worked together until that venture ended in the summer of 2016. After that, the couple operated Shinjuku Station as a takeout sushi shop in the North Street space for a year and a half.

Now they've transformed it into a sit-down restaurant serving "Japanese comfort food," said Peter. The restaurant seats about 35 people at eight tables. Strings of lights glimmer from the charcoal-gray ceiling; a chalkboard menu hangs above the counter where customers order.

"Mao says, if you want people to come to your place, you have to have beer," he added. The restaurant has four Vermont beers on tap, as well as cans of Sapporo beer and bottles of sake.

Bobby Gay, who previously cooked at Zabby & Elf's Stone Soup, runs the kitchen at Shinjuku Station. The restaurant serves traditional sushi rolls such as salmon, tuna and California rolls, as well as vegan rolls, seaweed salad, miso soup and curries. Specials include a small bowl of chicken or vegetable curry and a sushi roll for $8.

Shinjuku Station is open Tuesday through Saturday, noon to 9 p.m. It joins a growing enclave of nearby eateries, including Drifter's and Barrio Bakery. "We want to offer reasonably priced food for this neighborhood," Peter said. "We're sort of a little team here."

The original print version of this article was headlined "Japanese Joint"