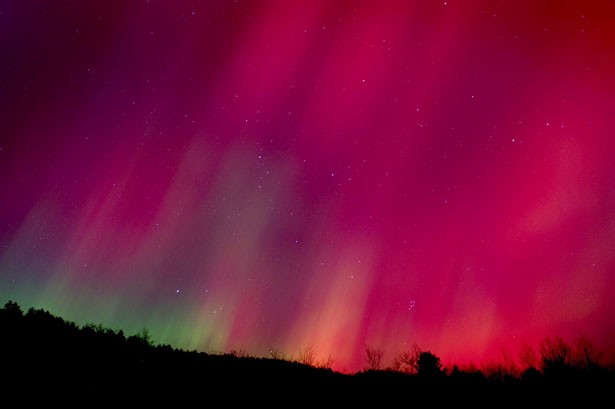 Studio Place Arts in Barre draws the name of its current show straight from the mouth of the Almighty: "Let There Be Light." And there is light. While not a show of biblical proportions, it nevertheless fills the gallery with luminous and engaging pieces in a range of media. The 15 participating artists approached the theme of "light" with works ranging from whimsical lamps to sculptures that play with shadows to intriguing photographs and self-illuminated abstractions. Unlike most SPA exhibitions, this one features few painters. Carleen Zimbalatti's 90-by-90-inch "From the Center," however, has a major presence in the show.

Zimbalatti applied a matrix of small, dark lines over the 8-foot-square color field, which modulates from deep orange around its edges to a center of pale yellow. That foundation is like a solar disk illuminating the canvas, and the rhythmic little lines make it seem to pulse. It's a dramatic image that exhibits the rare combination of minimalism and power.

Marshfield artist David Johansen expands the boundaries of painting, literally "painting with light" in his two wall-mounted constructions. The abstractions combine surfaces of mixed-media painting with the element of light itself, in the form of colored neon emanating from beneath them. "Lava Section" is a 36-by-36-inch construction re-interpreting the primordial forces of a volcanic eruption. A black, tar-like skin in the upper portion of the image gives way to fiery, red-orange nether regions in the painting's lower half. "Ocean Section" is a glowing, 11-by-36-inch panorama of blue light, as calm as "Lava Section" seems violent. A long, thin line of sapphire neon glows along its horizontal axis.

Photographers have had an intimate familiarity with light from the very infancy of their medium, but manipulating light as a darkroom tool isn't quite the same as capturing the elusive element. The brilliant colors of the Aurora Borealis cascade across a night sky in "Northern Lights, Braintree, Vt.," by photographer Jack Rowell. A scruffy silhouette of the night landscape frames sheets of brilliant hue - from green to magenta - falling through the firmament at a subtle diagonal. Stars are perceived through the colors, emphasizing the gauzy sheerness of the atmospheric phenomenon.

Charlotte photographer John Douglas also contributes an ethereal image to the exhibition. His "Mist Bow" depicts veiled daylight. While Douglas may be best known of late for his "Gun Show" series of nude self-portraits with weapons, the 40-by-48-inch digital image in this exhibition is an abstraction devoid of narrative. Dark values along the lower third of the composition dissipate as they ascend to reveal a ceiling of misty cerulean blue on the piece's upper edge.

The whimsical lamps featured in the show include Aaron Stein's "High Beams" and Stephen Conat's plumbing-influenced creations. Stein's automobile fetish - particularly with license plates - is ongoing, but the 1998 "High Beams" is basically a 1958 Pontiac headlight mounted in a white oak box on the floor. It's very tasteful, considering the headlight might be seen as junk by someone less of a car connoisseur than Stein.

Conat's "Deferred Maintenance" is more of a custodian's nightmare. It consists of a leaking pipe, apparently from an antediluvian basement, seeping frothy water into a steel maintenance bucket, in which a spotlight is ingeniously submerged. Conat's 7-foot-tall "Light Showers" is a brass and copper creation made from a standing shower setup, such as those found in clawfoot bathtubs. He added the lamp, complete with orange shade, hung over the antique faucets.

From the ridiculous to the sublime, the show's selections all have one thing in common: at least a little bit of brilliance.