Wilco gets Liggy with it 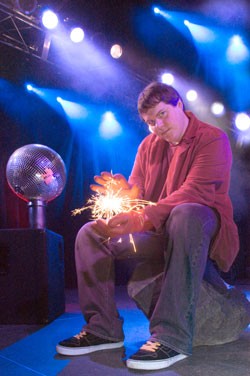 Back in April, Jason Liggett was lighting a Jeff Tweedy solo show at Higher Ground. It was pretty easy from his perspective. “All I did was focus a spotlight on him,” he says over green tea at Sapa's in Burlington. After the show he found out that Tweedy’s band, Wilco, was looking for a lighting designer. Within weeks Liggett was on the road with them — on a trial basis. Soon afterward, he was on his way to Europe as Wilco’s new lighting designer.

Liggett began working security for the original Higher Ground in Winooski in 1998. While many club employees dream about being onstage, his mind was on the bright lights. Finding an early opportunity at the club, Liggett gradually became the club’s lighting designer and has since worked with artists such as Ween, Mike Gordon, Yonder Mountain String Band, Grace Potter & the Nocturnals and the Benevento-Russo Duo. He is currently on the road with Wilco and will make his second trip to Europe with the band in November. In between stops, “Liggy” sat down to talk with Seven Days about lighting, travel and how patience helped him land his dream gig.

SEVEN DAYS: How did the Wilco gig come to be?

JASON LIGGETT: Well, during [the years I worked] at Higher Ground, I started to think, “Well, I’d like to be one of those touring guys.” And once you get past the idea that it’s not all sex, drugs and rock ’n’ roll, and you can make a career and be professional and do it on the road … I started working with the Benevento-Russo Duo, started working to try and get that touring gig. I’ve done lots of bands where I’m just, like, “Come on, you need a lighting guy!” There were opportunities that did come up through doing other gigs that just, for some reason or another, didn’t work out, or I declined on doing it, didn’t feel I was ready. And that’s kind of when the Wilco thing happened.

Jeff Tweedy was playing Higher Ground. I hit it off well with the management. So it almost fell into place perfectly. I asked, “Who’s doing lights [for Wilco] now?” I knew the guy who was doing it last year; he’s also Ween’s lighting designer. So I asked and they said, “We’re looking for somebody.” So I said, “I’d like to apply,” thinking that they must have a hundred résumés just sitting there. But it’s the thing about business, being in the right place at the right time, [having] the right attitude at the right time. And I really feel that it was meant to be. They kinda just liked me and went with it and said, “If it doesn’t work out, this little two-week tour…”

SD: Oh, so it was a little trial period…

SD: So what were those first two weeks like? Were you getting up there and freaking out every night?

JL: [Laughs.] Oh, completely. I know the technology, and I know how to run a board, but what I decided to do was take out the board that I wanted to be using a year from now. I’m using the same board that Chris Karoda [Phish’s lighting designer] uses. It’s a lot of technology to learn. That first day I was on the phone all day [says in mock-whimpering voice], “How do you make this do this?”

SD: Now that you’ve been doing this for several months, have there been certain moments where you really feel like, “Wow, this is really working, I’m killing it”?

JL: Oh, yeah, man. I try to go for that at least a couple times a week, that feeling. And it pretty much happens. But there’ve been moments where, literally, I’ll have a tear come down my face because everything hits at the right moment. It will be a moment where I’ve dropped a spotlight on Jeff when it’s gone from thunderous to just him, like in “Via Chicago.” In a moment like that, when I hit it, nail it exactly how, visually, in my head, it’s supposed to look, and you feel that gasp from the crowd, if I can make that happen … I don’t want that every night, because that would be too much emotion [laughter] and I’ll have to go to counseling. But if I can get to one of those moments through any kind of song that they do … A lot of times I’ll laugh when it’s really good, like on “Spiders (Kidsmoke),” if they’re extending that jam out and the lights are doing this crazy thing where it’s over the top, then sometimes I’ll just laugh, I just laugh at me being there.