She's 63 and Just Got Adopted Into One Bigger, Happy Family 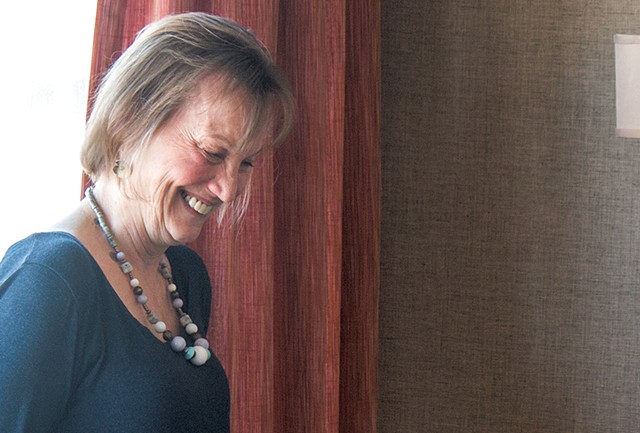 The call came several minutes early. Patricia Happy, a Burlington paralegal, had been anticipating it would be late. Courts rarely run on time, especially for hearings like this one, which are often scheduled in blocks.

"Oh, this is it!" she anxiously exclaimed.

On the other end of the line was the Sarasota, Fla., courtroom of Judge Donna Berlin. Besides the judge, clerk and bailiff, only Pat's parents, Diane and Richard, and their attorney and her legal assistant were present in the courtroom.

Adoption hearings in family court are closed and confidential — even when the adoptee is 63.

Pat initially planned to take the call from her seventh-floor cubicle at the Gravel & Shea offices at Corporate Plaza in downtown Burlington. Her friend and coworker Kelly Mercure would serve as notary to confirm that Happy consented of her own free will. The hearing would be over before anyone else at Gravel & Shea noticed.

To accommodate a reporter, Pat booked a conference room and told the managing partner what was going on: Forty-eight years after taking Pat in as their foster child, the Happys, a Burlington couple who have since retired to Florida, wanted to officially adopt her as their daughter.

The hearing was already under way when Pat and Mercure found the speakerphone button. Pat, wearing a blue dress and gemstone necklace, stood against the windowsill. She leaned toward the phone to hear her parents perform their half of the short proceeding.

"And as we previously told the judge, you've known Patricia for almost 50 years?" the family's adoption attorney, Susan Stockham, asked Diane, 78, and Richard, 80.

"And she came into your care and custody when she was 15?"

"And you maintained a parent-child relationship with her for all of the last 50 years?"

"And from that time to present, you feel that you've been able to provide all of her needs as parents?"

"All her needs?" Richard joked, eliciting laughs from everyone but Pat, who was still quietly trying to hear each word through the muddle of the phone's speaker.

"Do you understand by finalizing the adoption today that you're agreeing to accept her as your natural-born daughter?"

Pat Chasse had arrived in Burlington in September 1971 without money, shoes or a place to stay. The brown-haired teen was estranged from her biological family in Brattleboro. She had caught a ride north with a friend who told her Burlington had a youth shelter. The downtown space was called SHAC — short for Shelter Action — and would later become Spectrum Youth & Family Services.

Pat told shelter staff that she wanted to go to a foster home. SHAC gave her shoes and a bed for the night. Staff also told her to enroll in school and start looking for a permanent place to live. So, with clean clothes and shoes, Pat walked from Maple Street to Burlington High School.

There, she walked into Richard's office in the guidance department and explained her situation. He was struck by Pat's big smile and impressed that she'd walked more than two miles to enroll in school. Richard and his wife, Diane, happened to have experience fostering teens, he told Pat, and might be able to accommodate her.

Pat walked back to the shelter in tears, thinking, Now, I have some hope.

Richard invited Pat to their house for dinner to meet Diane and their two biological children. That night, they invited the girl to move in.

Pat quickly became part of the family. She helped send her new younger siblings, Lisa and William, to school each morning, worked in the vegetable garden, and joined family trips to visit grandparents. But the Happys, then in their early thirties, couldn't afford to formally adopt a third child. Instead, Diane drew up a mock "certificate of adoption" declaring Pat "a full member in good standing of the HAPPY family with all rights of and responsibilities thereto." Every family member signed it.

When Pat got married, the Happys hosted her wedding, and Richard walked her down the aisle. When Pat later got divorced, the Happys' daughter-in-law suggested she take the family name, and she did. Her parents live 1,500 miles away, yet they still find ways to spend time together, including a recent family vacation to Spain.

"They are with me every day, in little things," Pat said.

But it wasn't until last Christmas that Richard and Diane realized they could still make Pat their legal daughter. They'd read a story that morning in the local newspaper about adult adoption, a process they did not know existed.

Pat, now with two daughters and two grandchildren of her own, received a long text from Richard while driving home after visiting her younger daughter. Richard's message mentioned the news story and explained that he and Diane had talked it over with their biological children. They "got responses such as 'amazing' and 'I already consider it done,'" the text read.

"So we would be interested in pursuing adopting if it would not complicate your life," Pat's dad proposed. "I am writing rather than calling, so you would have time to consider whether it might in some way be difficult. And it was a nice Christmas thought for us."

With her phone in hand, Pat began to cry. But she waited to respond. She hadn't known adoption was still an option, either. As she drove three hours back to Vermont, she considered what it might mean. When Pat checked with her adult children, they reacted much like Richard and Diane's: We thought you were adopted. 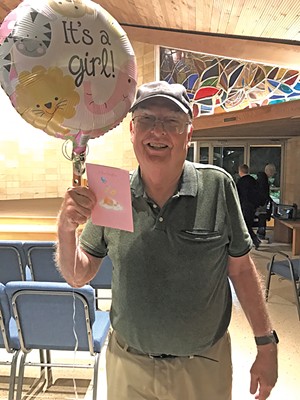 That's why the hearings tend to be joyful, misty-eyed affairs, said retired Chittenden County probate judge Susan Fowler. She once entered judgment for a 94-year-old man who adopted his stepdaughter. The hearing was delayed for some 20 minutes as the man inched into the courtroom with a walker.

"It took me a while to get here," Fowler remembered he joked, literally and figuratively.

Fifty-four adults were adopted in Vermont last year. State law requires that biological parents be notified of an adult adoption, but otherwise, filing is simple enough that many families don't need an attorney's help, Hughes said.

Some states have put restrictions on adult adoptions, in part to curb perceived misuse, said Stockham, the Happys' attorney. Before gay marriage was legal, some same-sex couples turned to adoption as a means of conferring legal protections afforded to heterosexual partners, Stockham said. Some states, in turn, capped adult adoptions at age 21.

But Stockham said there are good reasons to delay adoption further into adulthood, as when a biological parent is still alive and might object. And the desire for a family connection does not diminish with age, she said.

By the time of her formal adoption on March 27, Pat was already in the Happys' will, had taken their name and had laminated their homemade adoption certificate for safekeeping. There was no question she was part of the family.

Yet the hearing — completed in less than five minutes — was a kind of time travel for Pat.

The elegant grandmother became a smiling, precocious girl, eager to receive her parents' gift, crying from awareness of its immeasurable weight.

"And can you tell the judge why it's important to you that they do the adoption today?" Stockham asked.

"Oh, well, I've thought of them as my parents for the past 50 years, and to formalize it in this way is awesome," Pat said. "I don't know how to explain it. But they are so awesome, and I am so worthy of their awesomeness. I love them very much."

"Good, good," Stockham said. "So is it your desire also that the judge enter final judgment this morning declaring Richard and Patricia — I'm sorry, Richard and Diane — to be your parents?"

"Your honor, I present you a final judgment of adoption for Patricia Coates Happy on this very happy occasion."

"Well, I think all of the reasons I've been given are good enough for me," the judge said. "I've signed the final judgment, and I've returned it with counsel to record with the clerk of court so that it will become final.

"It's been a joy. Congratulations, Patricia," she added.

"I love them both so much," Pat said. "I feel like I've gotten married or had a baby or something."

The seven people in the Florida courtroom laughed, then applauded, and the hearing was over. As soon as the call disconnected, Pat turned to her friend.

She added, "It's like, how do you put it in a little sentence, your emotions?"