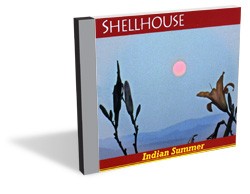 I admit, I didn’t have especially high hopes for Indian Summer, the debut release from local rockers Shellhouse. I know, I know. You can’t judge a book — or, in this case, an album — by its cover. Still, turning over my copy and seeing the faces of four conservatively dressed, middle-aged musicians clad in dark, Blues Brothers-style sunglasses didn’t exactly inspire a desire to rock and roll all night, let alone party every day. Maybe it’s my inner music snob rearing his ugly head. Or maybe I just don’t like being reminded that I, too, will someday be old and subject to the judgment of snarky whippersnappers like myself.

Still, my suspicion was that Indian Summer is the vanity project of aging musicians trying to hang on to lost youth — rarely a recipe for thrilling music. And in some respects, that’s exactly what the record is. But here’s the thing: It’s good. Shellhouse may not win big with the finicky skinny-jeans set, but fans of smartly conceived, no-frills rock will find a lot to like.

The band is the brainchild of songwriter Bob Teer and longtime collaborator Jim Fox. Together the duo have crafted a suite of 12 rock-and-roll nuggets that reflect an array of classic influences, from Tom Petty to Dire Straits and several other pop and rock staples along the way. Van Morrison seems an especially important touchstone.

Teer proves to be a sturdy songwriter, well schooled in the notion that less is more. He’s not trying to blow your mind with poetic lyricism or profound observations on life and love. Instead, he favors a direct and efficient approach accented by an equally forthright vocal style. Particularly on cuts such as the clever “Two Below Honey,” “Testing Out a Lie,” and the Latin-tinged “Still Waiting,” there’s a hint of Mark Knopfler in his delivery that is pleasing and familiar.

Musically, the band is solid. Fox is an impressive, if unadventurous, lead guitarist. He’s definitely got chops and, when called upon, adds enough axe-slinging fire to get the job done. A rhythm section of bassist Mark Paul and rotating drummers Travelin’ Jack and Bob DeFeo provide a durable foundation. Backing vocalist Andrea Teer rounds out the group and adds a welcome feminine touch to the proceedings.

In an age when everyone seems hell bent on finding — and subsequently overhyping — the next hot young band, there’s something to be said for a group that humbly goes about its business and rocks simply for the sake of rocking, regardless of what’s trendy.