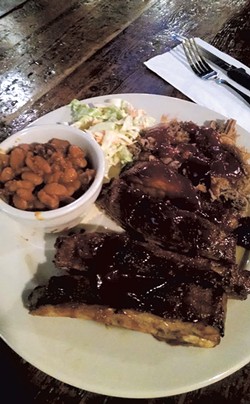 After a couple of nights testing out its taps and bar menu on friends, Shelburne Tap House introduced its full dinner menu last Friday, July 31. The owners, chef Ed Lambert and his wife and business manager, Sandie Maynard, dealt with a few glitches — including a bunk fryolator — in time to feed an after-work crowd.

The dozen or so patrons gathered at the bar sipped from 10 brews on draft, most of them local, such as Citra IPA from Rock Art Brewery and Queen City Brewery's Yorkshire Porter. Tap House's wine selection holds its own, too, with cab sav from California, pinot and Prosecco from Italy, and a French rosé.

Drawing on 25 years of culinary experience, Lambert cooks his menu to order and in copious portions. Popular items on Friday included the mountainous nachos grande and the St. Louis-style ribs, which Lambert slathers with his signature "triple ale BBQ" sauce. As the name indicates, the recipe contains three beers: Shed Brewery Mountain Ale, Switchback Ale and Fiddlehead IPA. The special sauce pops up across the menu — on the slow-braised brisket, the pulled-pork kaiser and even the chicken fingers. Other offerings include warm artichoke dip, sharp-cheddar mac-and-cheese and beef tournedos au poivre.

Comfort food isn't the only reason the Tap House feels like home. Lambert and Maynard recently refurbished the interior themselves, adding a new bar, wine racks made from repurposed wine crates and "about 12 gallons of paint on the walls," Maynard says. The only remnant of the spot's previous occupant, Town Tavern, is a vintage dry-goods sign above the dining area. Dark wood finishing and dimly lit tables make the space feel intimate despite its commercial location in the Shelburne Bay Plaza Shopping Center.

Shelburne Tap House is open every day except Tuesday. Dinner runs from 3 to 9 p.m., and the bar is open late.