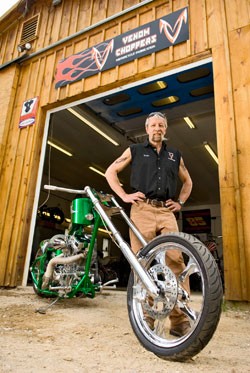 It’s tempting to call this year’s array of exhibits at the Shelburne Museum the most diverse ever, except that “diverse” has defined the place since Electra Havemeyer Webb populated it with her own eclectic Americana collections. Still ... a show the Hell’s Angels could love?

Indeed, “Full Throttle: Vintage Motorcycles, Custom Choppers and Racing Machines” fills all three floors of the Round Barn this season. The exhibit opens this Sunday, May 17, with an olfactory backdrop not of lube but of lilacs. The display of more than 40 motorbikes further expands the purview of “contemporary folk art,” as museum director Stephan Jost puts it, and is likely to attract visitors who’ve never set foot in the Shelburne before (unless they’re bikers who also admire, say, quilts).

Leaving aside their mechanical and technological innovations and their mega-horsepower, no one can question that art is involved in these splendorous vehicles, a few of them valued at more than a million dollars. Some of the bikes look like they’ve come straight from the manufacturer — despite some well-earned bumps and bruises — and represent the cutting-edge design of their time. But the custom jobs, old and new, are the jaw-droppers.

Some examples: Lock Baker of Eastern Fabrications LLC in Branford, Conn., modified a 1991 Harley Davidson into a seriously macho unit that Associate Curator Kory Rogers calls “very apocalyptic.” A second bike by Baker, named “Flash in the Pan,” has a vintage-looking 1960s paint job of metal-flecked purple with contrasting golden elements, and a hand-tooled leather seat. Its foot pedals incorporate images of two tiny (though buxom) strippers grinding on a pole. Hey, nobody said the bikes, or their makers, were PC.

An Indian-brand “Calgon” model, so low it’s called “slammed to the ground,” is painted candy-red over a metallic base that makes it seem to glow. It was customized by Sisco Lellos, owner of Green Mountain Performance in Mendon, Vt.

Dave Perewitz, aka “King of the Flames,” is one of the world’s best-known motorcyle customizers, based in Bridgewater, Mass.; he loaned a bike covered in orange, well, flames. Painted, that is.

The most astonishing craftsmanship in this exhibit, though, belongs to the motorcycle-with-sidecar built by Jesse James — spouse of actress Sandra Bullock, proprietor of West Coast Choppers and former star of “Monster Garage” on the Discovery Channel. Commissioned by the Airstream travel-trailer company for its 75th anniversary, the low-slung vehicle is based on a 1936 “Clipper,” says Rogers. “This motorcycle costs more than most people’s homes in Vermont,” he adds. Built of shiny aluminum — like the Airstream — the bike features gorgeous detailing and the builder’s characteristic 45-revolver chamber embedded in the handlebars. “He claims to be descended from the historic Jesse James,” Rogers explains.

To say these motorcycles are impressive is an understatement; whether you’re an easy-rider or a Vespa type, or even the sort who plugs their ears and holds their nose when a biker roars by, you’ll find much to admire here. Besides, there’s no vrooming allowed in the Round Barn.

Rogers reveals that Mike Palmer, owner of Venom Choppers in East Middlebury, “taught me everything I know about motorcycles, and helped me choose the bikes.” A “field trip” to a biker rally in Fort Lauderdale was an eye-opener, too. “I was a little out of my element,” the curator confesses.

Perhaps so, but surely even Mrs. Webb would have agreed that these vehicles are as elegant at their higher horsepower as the museum’s carriage collection, and that art at any speed is still art.

Other exhibits opening Sunday include “The Bright and Shining Light of Irreverence: Richard Saja and the Historically Inaccurate School,” Kalkin House;

“Piecing Together the Past: The Quilts of Florence Peto” and “Patty Yoder: Rugs of the Black House Farm,” both in the Hats & Fragrance Textiles Gallery; and “In the Eye of the Beholder: Selections of American and European Art from the Theodore H. Church Collection,” Vermont House.

On June 20, “Louis Comfort Tiffany: Nature By Design” opens in the Webb Gallery. Check upcoming issues of Seven Days for more on these exhibits, and the Calendar for museum lectures, receptions and other events. All exhibits close on October 25.