The term "visual art" implies being able to see it, so it's paradoxical that artwork itself rarely depicts visual impairment, such as a person wearing glasses. That's one eye-opener — pun intended — provided by the Shelburne Museum's current exhibition, "Eyesight & Insight: Lens on American Art," curated by Katie Wood Kirchhoff and Carolyn Bauer. Even those of us with faulty vision may not have noticed this absence, as if throughout history "20-20" were considered not just the ideal but also the norm.

Contemporary data tell a different story. According to the Centers for Disease Control and Prevention, about 12 million Americans older than 40 have some kind of visual impairment, and it's one of the most common disabilities in younger people, as well. That's a big cohort in this country alone.

Viewers can scroll through a thoughtfully curated selection of artworks in which sight is the through line. tweet this

Many of those folks would surely be intrigued by "Eyesight & Insight." And they could tune in from anywhere: The exhibition is entirely online, preceding a gallery installation that will open in May. For now, viewers can scroll through a thoughtfully curated selection of artworks in which sight — physical or metaphorical — is the through line. What enriches this theme is the interlacing of visual clarity and developments in science, literacy, entertainment and personal agency.

"Eyesight & Insight" is divided into four chapters, each with a different focus. The exhibition as a whole is about way more than spectacles. But the first chapter, titled "Early Optics in American Art," makes a logical observation: Eyeglasses were infrequently pictured in 18th- and early 19th-century paintings because few people actually had them.

The text does not note that a fellow in 13th-century Italy was thought to have crafted the first pair of primitive eyeglasses — this show is restricted to American art, after all. But nearly half a millennium later in the New World, corrective lenses were not yet widely available.

One early adopter was Benjamin Franklin. What schoolchild in this country has not seen an image of the founding father with wire-framed glasses perched on his nose? "Eyesight & Insight" offers one such portrait, painted in 1767 by Scottish artist David Martin. In fact, as the curators point out, Franklin — no slouch as an inventor — "has long been credited with the development of lenses that allow users to see objects both nearby and at a distance." He called them "double spectacles"; we call them bifocals.

Like Franklin, fellow Philadelphian Charles Willson Peale was a polymath; he also was an accomplished artist. This exhibition includes two of his well-executed paintings of men wearing glasses: an 1804 self-portrait and an 1822 painting of his brother James sitting at a table and studying another small portrait by the light of an oil lamp. The latter work is one of the earliest to depict artificial illumination in a domestic scene, according to the curators.

It's notable, too, that the development of indoor lighting — soon to become ubiquitous in American homes — facilitated such activities as reading in the evening hours. The parallel advancement of optical and lighting technologies in 19th-century America incidentally encouraged literacy. 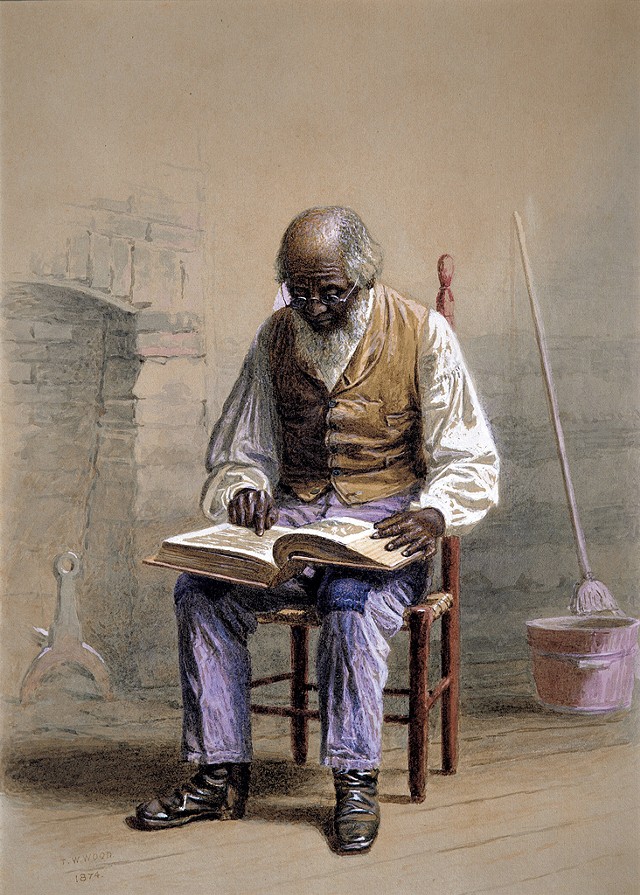 All the paintings in this chapter speak to similar contingencies, but one, "Reading the Scriptures" by Thomas Waterman Wood, makes a deeper point. In the 1874 watercolor, a "solitary, literate Black man," as the curators describe him, sits reading a large Bible on his lap. Given the year, it's likely this elderly gentleman had previously been enslaved. But he learned how to read and does so with the aid of corrective lenses.

The curators write: "These glasses provided a conduit for personal agency and the freedom—both of body and soul—that only an educated populace could hope to achieve in the years following the American Civil War."

Reading, of course, wasn't the only entertainment abetted by optical science. Invented in the 1830s, the stereoscope allowed viewers to look at a pair of identical two-dimensional images and perceive them as three-dimensional. It was a precursor to the View-Master, a hugely popular mid-20th-century toy, and to the 21st-century virtual-reality headset.

The "magic lantern," first developed in the 17th century and a forerunner of the slide projector, was sometimes used to project images of spirits or ghosts for aficionados of phantasmagoria, a type of "horror theater," note the curators. Perhaps we humans have always liked to see scary things from a safe remove.

Chapter Two, "Newspaper Vision," discusses how the rapid evolution of printing technologies — including screaming-headline typefaces — furthered a public appetite for reading. Newspapers, magazines and books became more affordable and available. "With this new sea of printed verbiage," the curators write, "sight became the primary, favored sense, and the ability to clearly read was rendered even more important for everyday people navigating their surroundings."

This chapter offers several paintings that depict individuals engaged with newspapers, as well as an 1844 broadside with eye-catching fonts touting the Eclipse, a horse-powered ferry that once transported passengers across Lake Champlain. 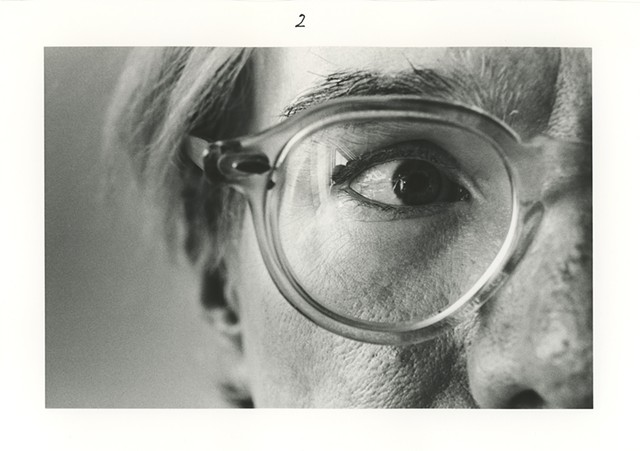 The following chapter, "Seeing Identity," brings us into more recent times and explores the modern notion of selfhood. Eyeglasses are both commonplace and individualistic expressions of fashion and identity. "Spectacles," write the curators, "have ... come to shape and inform our impressions of each other and ourselves."

Perhaps the most familiar example included here is a 1980 black-and-white photograph of Andy Warhol by Duane Michals, titled "Andy X 4." Actually, it's a detail of the pop artist's face — one eye framed by his signature clear-plastic spectacles and a lock of his iconic silver wig. The curators include a comment that Warhol made in his 1975 autobiography: "[E]yeglasses standardize everyone's vision to 20-20 ... everyone could be seeing at different levels if it weren't for glasses."

It's an ironic statement from an artist whose work traded on concepts of mass consumption and repetition — never mind the fact that Warhol himself obviously opted for the functionality of 20-20 vision.

A more compelling and complex piece in this chapter is a grid-based 2018 work on linen by activist-artist Carrie Mae Weems. "Untitled (Spike Lee Grid)" features images of the filmmaker — also identifiable by his oversize glasses — and text frames with the names of some of his films. The grid images are in black and white or saturated with blue. 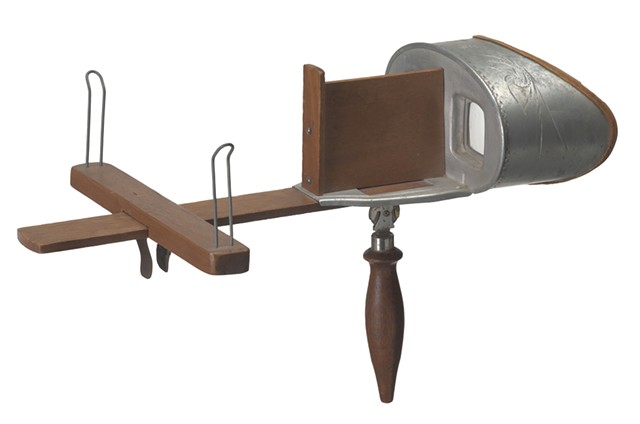 The work is not about eyesight per se but might be read as commentary on societal views of what Weems calls "colored people" — she reclaims the derogatory term in a similar grid work that preceded this one. That said, the cultivated appearance of Weems' subject comes through. Write the curators: "Lee's aviator-style glasses are established emblems for expressing his charisma, fashion sense, and creativity, and therefore it was only natural for Weems to make sure they were prominent in these thoughtful portraits."

These are live recordings without editing, they're shaky and super short, and the resulting images are somewhat fish-eyed. The artists could have made more polished products with actual video cameras — or even iPhones. Yet the rawness and immediacy of the Spectacles 3 videos make them strangely appealing, perhaps in part because they recall rudimentary stages of earlier technologies. And with the glasses literally attached to the artists' heads, the videos are as close as we can get to seeing through another's eyes.

The pieces contributed by Collier (and sons) and Flynn bring a freshening element to this concept: seeing through the eyes of children.

"Just watching the unfiltered excitement of discovery by my children was very inspirational," Collier writes in a Q&A follow-up. "It reminds me that as adults we often have difficulty accessing this kind of unbridled spontaneous excitement."

Indeed. Viewing the world with not just unclouded but also unjaded eyes might be the exhibition's most valuable invitation of all.

The original print version of this article was headlined "Seeing Things"