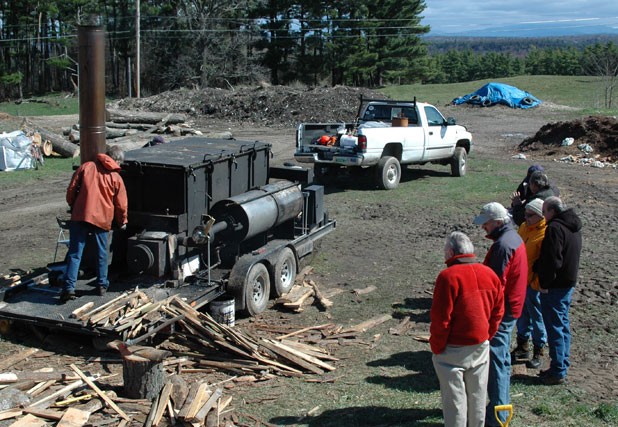 Marshall Webb is accustomed to getting his hands dirty. After all, he’s the woodlands manager at Shelburne Farms, the sprawling agricultural estate on Lake Champlain that has been in his family for generations.

But his latest project, handling charred lumber, isn’t as messy as you’d expect: A ton of “biochar” is remarkably clean, and holds the promise of purifying polluted water, revitalizing damaged soil, generating clean energy and even saving the planet from global warming, according to scientists who are experimenting with the blackened wood.

“The problem with biochar is that the potential is so great and so exciting that people tend to exaggerate what’s known about it,” Webb admits. “But, according to a whole bunch of people, biochar is one of the key discoveries that will enable humans to survive better in this century.”

What is this miracle material? Seated in his silo-shaped office in the north tower of Shelburne Farms’ farm barn, Webb drops a couple of discs on the table and explains. The first, he says, is a greenish-brown hockey puck made of pressed switchgrass that was grown in Pennsylvania. The second, slightly smaller disc is the charred and friable remains of that same switchgrass after it’s been reduced to its elemental carbon by heating it to about 1000 degrees Fahrenheit in the absence of oxygen.

Webb picks up the second disc, which crumbles easily in his hands. Surprisingly, his fingers don’t get very dirty at all — a good sign, he notes. Unlike the blackened remains found in a barbecue or fire pit, biochar contains few, if any, of the toxic byproducts left behind by incomplete combustion at lower temperatures.

Next, Webb explains how biochar is made. He takes out a contraption made from a coffee can stacked on top of a paint can with holes punched in the top. Basically, the paint can is filled with wood pellets, or any other kind of biomass, and a fire is built in the top can. As the fire burns down, it “pyrolyzes” the biomass below it, releasing gases such as hydrogen and methane, which are subsequently burned off. What’s left behind in the makeshift retort is biochar, as well as a bio-oil byproduct that can be used as fuel.

Several weeks ago, Webb, along with two researchers from Cape Cod, spent the weekend at Shelburne Farms with a much larger version of Webb’s coffee-can contraption making four 500-pound batches of biochar; they used scrap lumber left over from a saw mill. Webb sold a bag of the stuff to a man across the lake in New York who wants to do his own experiments with it. The rest Webb gets to keep to play with at Shelburne Farms.

His plan, which utilizes environmental studies students from UVM, involves putting several biochar filters into a nearby stream that empties into Lake Champlain. The students will test the water above and below the carbon filters to see how effectively they remove phosphorus, nitrogen and E. coli bacteria, all of which are pollutants that run off the farm and deteriorate the water quality. If everything goes according to Webb’s expectations, the biochar filters should capture these pollutants in much the way an activated charcoal filter does.

Next, Webb plans to take those nutrient-saturated filters and add them to test plots in Shelburne Farms’ vegetable gardens. This should not only return the nitrogen and phosphorus to the soil, where it can be absorbed by plants; the biochar should also help retain moisture and provide a fertile environment for the billions of microorganisms necessary for healthy soil.

“And the side benefit is that the carbon is basically sequestered for a thousand years,” Webb adds. “It doesn’t break down or go away.”

Although the term “biochar” is relatively new, as are many of its uses for environmental management, the idea has actually been around for centuries. Pre-Columbian Amerindian populations were known to have added a version of biochar to the soil in the Amazon Basin to increase its fertility. It was even given a name, terra preta de Indio, Portuguese for “Indian black earth,” which historians believe may have contributed to the development of complex civilizations in that region.

Over the last two centuries, agronomists around the world have also recommended adding charcoal dust or similar charred material to the soil in order to retain moisture, boost soil chemistry and improve seedling growth. However, only recently have researchers begun to recognize the vast complementary potential of using biochar to lower greenhouse gases, generate heat and revitalize soils damaged from decades of logging or overfarming.

For his part, Webb says that if the biochar lives up to its much-vaunted potential — Bob Wells from Cape Cod’s Redberry Farm was able to increase the output of his farm by thousands of dollars per acre, he notes — Webb would eventually like to build an oven of his own at Shelburne Farms for making biochar, which could also be used to heat the animal barns or other buildings, all in a carbon-negative system.

“There’s a relatively small but very, very passionate group of individuals who are working on this,” Webb says, manipulating a lump of charred wood with his fingers. “And I could be one of them.”