Sheepish About Hooked Rugs? Not After This Exhibit 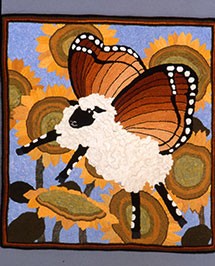 If you think you can’t muster any enthusiasm for hooked rugs, an exhibit at the Shelburne Museum this summer could change your mind: “Patty Yoder: Rugs of the Black House Farm.”

Yoder, late of Tinmouth, Vt., worked as a teacher and designer for several decades and was nearly 50 by the time she found her ultimate artistic medium, the hooked rug. But from the beginning, she applied rigorous aesthetic standards to the process of creating patterns, dyeing wool and hooking. She treated each rug like a painting, sketching the landscapes and portraits of family, friends and her beloved sheep from photographs, then enlarging the sketches and tracing them onto linen backing. Yoder meticulously dyed her own wool, creating intense solid colors that encompassed nearly every hue in the color wheel. She even developed a signature hooking process: Instead of following the standard rule of thumb that each loop be as high as it is wide, she purposely kept the pile very low. This unusual technique flattens the images and heightens her subtle color variations.

When Yoder died in 2005, she had been hooking rugs for just 13 years. In that short period, she created 44 masterpieces, 29 of which are on display in the Shelburne’s Hat and Fragrance Textile Gallery. She also published, in 2003, a children’s book called The Alphabet of Sheep, based on her rug series of the same name.

Almost all the images in this exhibit are of her intimates — her favorite sheep; her husband, Ramsey; one of her two sons; a dear friend. Even the portraits of people often feature sheep in one way or another; sometimes their faces actually supplant those of the humans.

The enormous portrait of the ewe Lydia, entitled “Y is for Yoder,” from the Alphabet series, is as detailed as any flattering painting of a human VIP. Lydia’s gorgeous eyelashes look as thick as Phyllis Diller’s, and every curled strand of wool in her thick coat is a ribbon of light and shadow. The ewe’s head is lowered demurely, as if her own beauty embarrasses her. “Lydia” is a reminder that barnyard creatures are glorious, if you look at them just so. And these portraits might make you think twice about eating mutton.

It would appear, in fact, that some of Yoder’s closest companions were the sheep she and her husband raised on their southern Vermont farm. In her extraordinary Alphabet series, she lovingly captures the personalities of gamboling lambs, pulchritudinous ewes and regal rams.

Her development of an obsession with sheep and rug hooking was an unpredictable turn of events for Yoder. She had already raised two sons and retired from a career as a junior high school art teacher and entrepreneur (she’d started soft-toy and interior design companies in Ohio). Yoder and her husband began summering in Vermont in the late 1970s and retired here to raise sheep in the 1980s. At one point, a barn fire nearly destroyed their flock, but the couple nursed the survivors back to health and rebuilt.

It wasn’t until Yoder met Dorset rug maker Esther Knipe that she got, well, hooked on rug making. Knipe was determined to teach the younger woman everything she knew, and though Yoder didn’t start hooking until five years after Knipe’s death, she thought of her as a mentor.

In homage to the master hooker, Yoder created a large portrait of Knipe. From a distance, the 2.5-by-3.5-foot rug looks like a watercolor painting. Dappled light fills the background, which is partially shaded by an enormous tree (only the trunk is visible), under which Knipe sits in profile. Her gray hair is loosely tied in a knot, and she holds one hand under her chin. The drape of her clothing, a sweater and long-sleeved dress, appears to weigh on her frail body, but her bearing remains upright.

Part of the charm of Yoder’s work is the balance of realism and fantasy in a medium normally relegated to the space beneath one’s feet. She alludes to great works of art — Chuck Close’s self-portraits and Guiseppe Arcimboldo’s female made of vegetables — while crafting a whole new genre of her own.

Yoder took this humblest of crafts, designed for reusing scraps of old wool (and even nylon stockings), and turned it into a transcendent art form. It may have been an unusual choice for an artist with a contemporary eye for color and composition, but it was the right one for Patty Yoder. And this exhibit perfectly suits the Shelburne Museum, which in recent years has demonstrated that the “folk” idiom belongs not just to the musty past but to the present, where each new generation of artists can embrace and transform it.

“Patty Yoder: Rugs of the Black House Farm” will be on view at the Shelburne Museum through October 25.