Dining without menus could be a new trend in Vermont 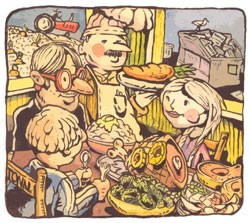 Back in June, my husband and I were driving home from a wonderful dinner at a downtown restaurant when we realized we hadn’t paid the check. Now, please understand, we’re not generally the types to slip out the bathroom window, and we hadn’t the excuse of trying to catch a movie or a show at the Flynn. Rather, we had lingered over dessert and coffee, chatted with other diners, and even thanked the host on our way out the door.

Despite feeling somewhat chagrined about stiffing one of our favorite restaurants, once we had settled our account, I began to view our lapse as a testament to the real success of the meal. Fact is, we were on our way home from a restaurant experience that upended much of what we expect when we go out to eat. We had just attended the first of the Penny Cluse series of five family-style meals held from June through October.

Unlike the way we usually go out to eat — Table for two at 8:15, please — this meal had 50-some “guests” who all showed up at once, and there was no menu. The evening began with a sort of cocktail hour where everyone gathered around the counter noshing on what the kitchen described as “predictably random hors d’oeuvres.” (Over the course of the series, I recall seeing — and devouring — deviled eggs, fried chicken livers, lamb nachos, all manner of homemade pickles and even pork meatballs served up in little pumpkins.) For dinner, we all sat together at long communal tables, and the food came out of the kitchen on large platters that we passed around and shared. It was more like being at a lively dinner party than in a restaurant, which I hope explains how we managed simply to wave goodbye and head out the door when it was all over.

Penny Cluse chefs Charles Reeves and Maura O’Sullivan dreamed up their dinner series in conjunction with farmer friends Eric and Keenann Rozendaal of Rockville Market Farm in Starksboro. Inspired by reports of supper clubs and underground restaurants starting in places like Seattle and Brooklyn, and fueled by the fact that O’Sullivan, who ran the Smokejacks kitchen back in its heyday, missed cooking “dinner food” (Penny Cluse serves only breakfast and lunch), the friends “got all fired up about the idea” last winter. The concept was simple: Host one dinner per month, use only word-of-mouth advertising to attract a manageable core group of people, and serve a single menu featuring meat or poultry from Rockville Market Farm — pork, chicken or lamb — accompanied by whatever in-season produce the farm could deliver. “I loved the idea of an unscripted menu,” explains O’Sullivan. “It’s liberating.”

Turns out it’s liberating for the diners, too. At one dinner, I heard a guest excitedly remark, “I love not having to worry about what to order” as she dug into her pork tamales.

While moving away from the typical menu-driven restaurant may be liberating — and even trendy — it can also be seen as undoing a quarter of a millennium of Western dining history. Up until the late 18th century in Europe and the colonies, the only options for eating away from home were taverns and inns where diners paid a flat fee to share a meal at communal tables whenever the host served it forth. The only instances of printed menus were at grand banquets, where they served simply as listings of dishes or as mementos, never as means to make choices. Then, in the 1770s, a combination of political and social upheavals — including the French Revolution and the dissolution of the French guild system — gave rise to a new individualized style of eating away from home. By 1780, restaurants began inviting customers to choose from a diverse menu and be charged accordingly. Much as we do today, patrons could order a meal to suit their taste, appetite and purse. In addition, customers were seated at small individual tables, alone or with acquaintances, no longer at the large, boisterous table d’hôtes of taverns and inns. For the first time, it became possible to eat in private and public simultaneously — in other words, to see and to be seen.

So what does it mean that we’re seeing a movement back to communal eating and menu-less dining? A recent New York Times article quotes Jeremy Townsend, a founder of Ghetto Gourmet, an underground restaurant in Oakland, California, who says, “People want to get out of that cookie-cutter experience and have a shared experience that has some meaning and authenticity, and some story behind it.”

Chef Jozef Harrewyn at Chef’s Corner in Williston says much the same thing. He and his business partner, Scott Sorrell, hosted a family-style Oktoberfest dinner last month featuring sausages, sauerkraut and a dense chocolate cake. Their main motivation: connection and community. “In today’s times, people really need something fun and affordable in their lives,” says Harrewyn, accounting for the success of the largely unadvertised dinner — they simply handed out flyers to café customers and filled all 75 seats in a matter of 10 days. The price may have had something to do with it, too — only $15 per person. “We didn’t make much money on it,” Harrewyn admits, but, he adds, “we had a ball!”

The lack of profit motive doesn’t seem to be stopping Harrewyn and Sorrell from planning a Hawaiian-style dinner for after the holidays and others to follow. They’ll most likely have to raise the price a little, but they maintain the meals will stay affordable. “It’s not going to be foie gras and all that bullshit. That’s not what it’s about.”

Maura O’Sullivan sees the role of her dinners much the same way. “Our reasons are as social as anything else,” she explains. “We wanted to pull our little community in.” Like Harrewyn, she admits that the series wasn’t a big financial success for the restaurant, though she says, “We probably made some money on some of them.” (The price ranged from $35 per person to $50, depending on the protein.) Does Penny Cluse hope to change that? O’Sullivan doesn’t see the family meals ever becoming high-end dinners — that’s not what they’re about. Rather, she describes them as akin to community suppers — except that diners don’t have to go to the grange hall, and do have the assurance that the food will be really good.

The deliberate informality seems to define these menu-less suppers as much as anything else. Over the course of the summer, the Inn at Shelburne Farms hosted its own series of Sunday-night suppers for $35. “The intention was to create a cozy, congenial atmosphere,” explains Phoebe Garfinkel, food systems coordinator at the Farms. Supper started with a big garden salad packed with just-picked vegetables and served family style. Vegetables and sides were all shared in the same manner. “The whole idea is to highlight ingredients in season — to create a menu based on the garden and land,” Garfinkel says.

The one feature differentiating the Shelburne Farms supper series from other local menu-less meals was that customers were allowed to select their main course. For instance, one night guests had a choice between Misty Knoll chicken, pasture-raised lamb and Vermont pig — but there was no indication of the specific cut or preparation. According to Garfinkel, “This allows the kitchen the flexibility to make the best use of what’s available.”

Perhaps the most compelling aspect of menu-less dining is the positive impact it can have on the farm-to-table movement. For chefs to partner effectively with farmers and bring the freshest ingredients into their kitchens (and onto our plates), they need the creative freedom to respond to what the farm has to offer. If a chef is restricted by a set menu designed to offer something for everyone, then he or she may be unable to respond when a farmer shows up with a bounty of gorgeous ripe produce or tasty bits of meat and poultry.

For instance, no matter how much you love those deep-fried squash blossoms at your favorite restaurant, the reality is that good Vermont squash blossoms are available only in the summer — and then only in a pretty narrow window. It’s up to the chef to figure this out and serve them when they’re at their best, and then it’s up to us to trust the chef to tell us what’s good and when. Perhaps Maura O’Sullivan says it best: “It’s about trusting the restaurant, trusting the chef, and just being willing to enjoy the community.”

The good news is, when you do trust the restaurant and embrace the community it fosters, you greatly increase your odds of getting invited to one of its menu-less meals. Just remember, trust goes both ways — don’t forget to pay your tab.

Molly Stevens is a food writer, editor and cooking teacher whose articles and recipes appear regularly in Fine Cooking magazine, Bon Appétit and Saveur. Her cookbook All About Braising: The Art of Uncomplicated Cooking won a 2005 James Beard Foundation award. She lives in Williston.