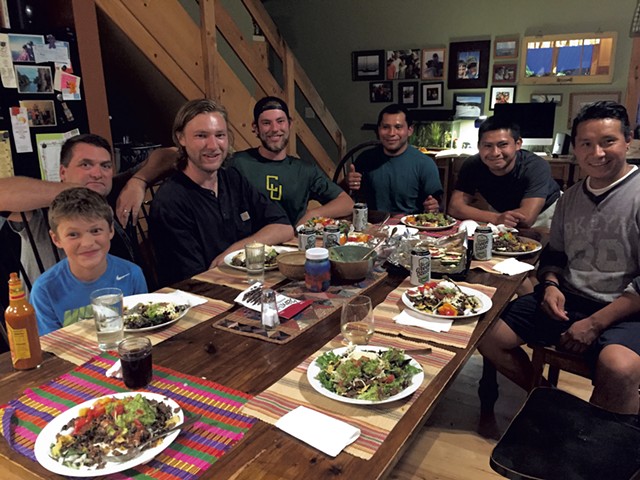 Hans Rozendaal's birthday fell on a Thursday this year, which made September 7 — the day he turned 9 — extra fun. Thursday is the day the Rozendaal family and their farm crew have dinner together at their farm, Rockville Market Farm in Starksboro. For Hans' birthday, his mother made taco salad and baked a triple-layer chocolate cake.

A week later, though it was no one's birthday, the farm team prepared and shared another festive meal: Tenzin Tsamchok from New York City, who works for the farm, made dumplings and dipping sauces. With help from two Guatemalan farmworkers, he put together a northern New England farm meal with roots in his Tibetan ancestry.

"Cooking is a beautiful thing," Tsamchok said on a recent Thursday evening at the farm as he cooked eggplant and corn and cut vegetables for salsa. "It's a way to everyone's heart. It's a way to bring a smile to people's faces."

The Thursday dinners are also a way for farm owners Eric and Keenann Rozendaal and their crew and kids to spend time together at the end of a busy week and before the weekend markets begin. The family and their employees take turns cooking. They eat in the Rozendaals' house or on the grass by the grill. They might spread the farm feast on a table in the packing room, tossing a Frisbee before the meal, kicking a soccer ball after. Occasionally, they go out for burgers and beer.

"We've just said, 'Let's have a time when we're not all working where we can share food together and chill out a little bit,'" Keenann explained. She works on the farm and as a registered nurse in the cardiology unit at the University of Vermont Medical Center.

The bilingual meals, at which Eric and Tsamchok speak English and Spanish, bring together the Vermont family with men from distant parts of the world. Food, of course, is a magical connector. Its appeal is greatest when the meal is made with ingredients grown by the people who are cooking and eating it.

"Good chefs, when they cook, I think it speaks to who they are," said Pete Fortuna, who grills gorditas at the farm's stand at the Burlington Farmers Market. Fortuna was talking between bites of a fabulous taco dinner made by Tsamchok. "I think this [dinner] shows Tenzin's personality. You can get a look at who he is."

Rockville Market Farm is a 108-acre organic farm on conserved land in Starksboro. The diversified farm that Eric started in 2001 — after five years at Burlington's Intervale — is perhaps best known for two products: eggs and butternut squash. The eggs, from 1,000 laying hens, are marketed as Eric's Eggs. The squash, 100,000 pounds of it per year, leaves the farm in a few forms: as a whole vegetable; peeled, sliced and packaged; or as the main ingredient in butternut-squash doughnuts.

Rockville also has a presence in New York City, where for five years the farm has been a vendor at prepared-food markets. This range of endeavors is possible, Eric said, because of his crew.

"Keenann and I feel like we won the lottery," he said. "They're family."

Rockville has employed foreign farmhands through the federal H-2A visa program — which permits seasonal agricultural workers on U.S. farms (see below) — since Hans was born. Three days before Hans' birth, Walter Pec Ticun arrived from Guatemala to work at the farm.

"I always say I got two sons in one week," Eric said.

Walter, then 19, arrived on a chilly September night with another young worker. Keenann made a giant pot of chicken soup for the pair, cooking with farm-raised chickens and vegetables.

"I remember them being scared of the dogs," she said.

Now 28 and an annual member of the crew, Walter is comfortable with farm dogs and close to the family. He lives with his coworker, his 21-year-old brother, Marvin, in a bunkroom on the ground floor of the farmhouse. Their quarters are equipped with a kitchenette and flat-screen TV.

Over the years, Walter has adopted some Vermont ways: eating at the Bobcat Café & Brewery in Bristol, drinking Green State Lager and Super Session, and cliff-jumping at Bartlett Falls in Bristol. He sports a tattoo of Vermont on his upper right arm.

Walter works on the farm six months per year. The past three years, Marvin has worked with him — the two come from a family of 10 siblings in Sacatepequez Santiago. Eric, who served in the Peace Corps in Guatemala for two and a half years, speaks with them in Spanish.

"It gives these guys peace of mind, knowing they have a boss who can communicate with them," Keenann said. "Having these guys here, the two of them, it's like four employees, [given] the quality and quantity of work they do."

Walter and Marvin work 12 hours a day, six days a week, cutting back to 11 hours a day as the season ends. After a five-minute meeting with Eric at 6 a.m., the farmhands are off to work the fields — planting, weeding, harvesting, plowing. The pair also performs various duties to prepare for the markets in Burlington and New York.

One evening in early October, Eric pointed to wooden bins that held 4,800 pounds of butternut squash. Walter and Marvin had harvested the vegetables in a few hours before supper. The brothers' production and the quality of their work doesn't falter from the first hour of the day to the last, Eric said.

"The farm runs itself, for sure, because of them," Eric said. "It's a nice combination: Tenzin runs New York. These guys run the farm. And I do the oversight."

Eric said he pays a consultant $1,000 annually to handle the paperwork required to employ the Pec Ticun brothers through the H-2A program. By contrast, he found Tsamchok on Craigslist.

Tsamchok, 37, lives in Queens. He moved from India to New York City when he was 16 and has cooked in restaurants there for about 20 years. He was driving a cab when he saw Eric's Craigslist ad looking for a person to run Rockville's weekend markets in Brooklyn.

Tsamchok was interested in a job that allowed him to move around, he said, and where he'd learn a new skill: growing things. He drives to Starksboro from New York midweek to work on the farm and often cooks the Thursday meal.

"He's like an Italian mother," Eric said. "The cooking came with the package."

Eric is an appreciative recipient, according to Tsamchok: "The cooking is not Eric's field," he said. "But the eating is."

Tsamchok said he loves to cook with food grown on the farm and is fascinated to learn about seeds and soil from Eric. After the Thursday dinner and some sleep, he's up at 4 on Friday morning to make 1,200 doughnuts. Then he heads back to the city in the afternoon in his loaded truck to run the markets.

"It's beautiful," Tsamchok said of farm life. "Every day I'm learning something new, which is always good: in terms of cooking, in terms of growing food, in terms of meeting people."

Amid the new experiences, Tsamchok has found something familiar: a landscape that reminds him of his childhood home in India. "I did five hours' drive only," he said, "and I'm home."

Walter and Marvin will head back to Guatemala soon, with plans to return to Rockville next spring. By then, Walter will be a father; his wife is expecting a baby in November.

Walter was just a kid when Keenann welcomed him to the farm with a pot of soup. Next month, when his daughter is born, he will name her Keenann Yolanda.

About 450 documented foreign farmworkers are employed in seasonal agricultural jobs in Vermont every year, according to Chance Payette, a Vermont Department of Labor program monitor and advocate. The workers are eligible for employment in Vermont (and other states) under the H-2A visa program, which the federal government established in 1952.

The mandated salary for these workers in Vermont is $12.38 an hour. In order to hire seasonal foreign labor, an employer must first seek American workers for the positions. For a Vermont farm, that means advertising in Vermont, Massachusetts and New York.

Paul Mazza, a produce farmer in Chittenden County, has employed H-2A workers for more than 20 years. He says he can't get U.S. workers to fill the jobs.

"You put them out in the field, and they're gone within an hour," Mazza said. "If you want to try it, come on down in the spring."

Mazza employs 22 men from Jamaica with H-2A visas, he said. They trim berries, plant corn, and pick apples and berries.

"They're awesome," said Mazza, whose farm is based in Essex. "Without them I'd be nothing, and everyone else would be, too. And food prices would be even higher, plain and simple."