Is the CSA boom coming to an end? 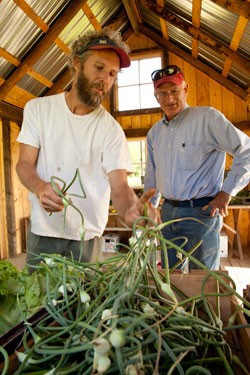 The atmosphere at Burlington’s Intervale Community Farm is festive as customers trickle in, shopping bags in hand, to collect their weekly shares of produce under an open-air pavilion. Kids are romping in the grass nearby; an accordion player straps on his squeezebox and launches into a jaunty tune.

This has been a routine sight at the Intervale each summer for some 15 years, since the community-supported agriculture (CSA) program took off there. But today, an unfamiliar sign hangs by the register, where farm manager Andy Jones greets customers. It reads: “Summer shares are still available — please tell your friends and colleagues.”

That’s a sign that the popular CSA isn’t pulling its usual, well, share of participants. The Intervale Community Farm’s lagging membership might be chalked up to a number of factors, including Tropical Storm Irene last summer, which wiped out the farm’s harvest. Whatever the reason, it’s unusual: Shares normally sell out by mid-spring at this farm, which feeds more than 500 families each year.

And it isn’t an isolated phenomenon: Farms throughout Chittenden County report that memberships in the innovative farm-subscription model are dwindling. Under the CSA model, customers pay up front for produce doled out over the course of the growing season, thus guaranteeing revenue for farmers at the beginning of the year, when funds are most useful. The model has helped jump-start a new generation of local farmers and consumers.

“There was a real significant role for CSAs over the past 20 years in terms of really getting people connected to local food and the land and their farmers,” says Sona Desai, the food-hub manager at the Intervale Center.

But now, she says, the local-food movement is much more robust: “You can get it everywhere.” That’s good news for the local-foods industry as a whole, but it’s changing the economics on some farms that, for a long time, have relied on income from CSAs.

The days of sold-out shares and waiting lists “are long gone,” says Dave Quickel, owner of Stony Loam Farm in Charlotte. This year his farm sold about 100 shares (it had aimed for 120). Quickel says that CSA sales are finally leveling off after a plunge a few years back, but the market seems irrevocably changed.

In her work at the Intervale Center, Desai has heard from many farmers about the CSA slump last spring. Some, such as those at the Intervale Community Farm, point out the devastating effect of last year’s flooding and erratic weather. The Intervale Community Farm “turned in” — meaning completely discarded — 15 acres of vegetables that were microbially contaminated after Irene — a “disheartening” experience, says Jones. He guesses that some members were reluctant to gamble the up-front cost of a CSA share after a previous growing season cut short by several weeks, and thinks some may still worry (despite assurances from state environmental agencies) about the possibility of soil contamination after the flood.

But Desai doesn’t think the CSA dip can be chalked up solely to the storm. She points out that farmers markets are booming, and more and more supermarkets are selling local foods. Farmers add that competition is fierce in the CSA market itself: A listing of organic farms offering CSAs compiled by NOFA-VT swelled from 34 farms in 2001 to 114 farms 10 years later.

“I think there’s a trend toward convenience, and people want to have more choices,” says Wonnacott.

With some locals defecting to farmers markets or supermarkets, CSAs are increasingly offering new and innovative models to lure customers. Some are offering smaller shares designed for couples or single people, a few have started peddling year-round shares, and some farms specialize in “meat CSAs.”

One emerging model is the workplace CSA: Instead of a customer trekking to the farm, the farm comes to the customer. Some farms offer drop-off locations, and others coordinate directly with businesses so employees can collect their CSA shares at their workplaces. One such popular system is already operating in Rutland, and Vermont Agency of Agriculture local-foods administrator Abbey Willard launched a pilot program for state offices this year.

She barnstormed through Vermont earlier this spring, hosting meetings at state offices in Addison, Washington and Windsor counties to bring together farmers and potential customers.

Willard explains that she was working purely as a matchmaker for the farmers and employees. While she’d love to see state employees eventually earn a financial bonus or health care premium reduction for buying local foods, right now the state isn’t offering such incentives. Willard is simply interested in creating a framework for bringing farmers and potential customers closer.

“One of our greatest goals is to allow for convenient access to local food,” Willard says. Because of employees’ work schedules, or the distance they travel to work, “making it to a CSA pickup on the same day of the week at a consistent time … is sometimes impossible.”

On-farm CSAs may not be the most convenient option — but that hasn’t convinced Quickel at Stony Loam Farm to make many changes. He’s not interested in offering a drop-off location or workplace CSA because, for him, part of the beauty of a CSA is bringing customers to the farm itself.

“It’s not just a way to sell people the vegetables; it’s a way to have people come to our farm and experience the farm,” he says. So, even though Quickel’s sales of shares are down from a high of 145 a few years ago — he remains bullish about the traditional CSA model. “I love the CSA, and I hold on to it,” he says. “It’s my passion.”

Jones reports that the Intervale Community Farm’s CSA is filled to 95 or 96 percent capacity this year. The farm will have to make up the revenue somewhere else — probably in wholesale vegetable sales to nearby supermarkets — but the slump in membership this year won’t make or break it.

Wholesale is also where Quickel is turning to make ends meet: While the CSA once contributed about 80 percent of Stony Loam’s income, that income is now divided 50-50 between the CSA and wholesale business.

In the long run, Jones is confident that the CSA market — while a “niche” — will always attract a certain number of enthusiastic customers. “There are still an awful lot of people who are psyched about this,” he says.

The customers agree: The scene is jolly as they explore the farm during the recent, sunny pick-up day. Charlotte Wheater, a Jericho resident, pauses in the field of cut-your-own flowers with a pair of pruning scissors in hand. She’s been a member of the Intervale Community Farm for more than 20 years and remembers the early days fondly. It was much harder to find fresh, local vegetables back then, she says, and the entire concept of a CSA was unusual.

“When you buy in, you go for the good and the bad,” Wheater says. While she understands that a bad year — like the last one — might pose a financial burden for some members, she says she’s reaped far more than she’s sowed over her own years with the farm. “It doesn’t get any better than this,” she says.