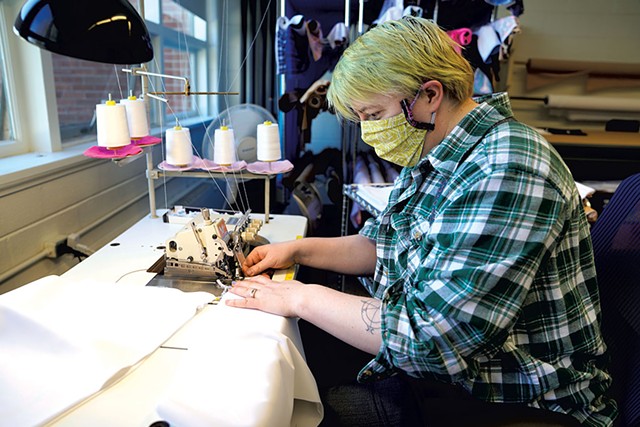 Typically, beginners learning to sew are warned to be careful when choosing fabrics. Anything stretchy, slippery or finicky requires special equipment and know-how. Stick to cotton, linen or chambray, the advice goes. Beginner patterns are often simple and loose, with room for error.

This approach wasn't going to work for Eli and Krista Coughlin-Galbraith, who began sewing in their New York City apartment about a decade ago. They were making costumes for comic-book conventions; they wanted to use spandex and make corsets.

So the couple jumped straight into the deep end, sewing with difficult fabrics and trying on the clothing repeatedly to ensure a perfect fit. They made costumes for themselves and took commissions from friends, and Eli took a summer pattern-making intensive at the Fashion Institute of Technology in Manhattan.

At the same time, "a set of gender identity revelations" was inspiring Eli to try out chest binders: compression garments designed to flatten the chest. Binders are often made of thick spandex and nylon.

"I bought a chest binder for myself that did not fit. I bought a second one that did not fit," Eli said. "And then I looked at those and went, 'This fabric is not scary to me. The pattern is not difficult ... I understand this fabric, and I can make it better.'" 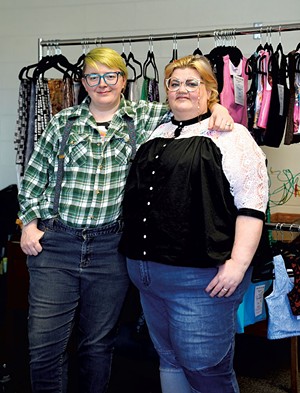 In 2014, Eli and Krista founded Shapeshifters, making and selling custom binders in lively patterns and colors. Theirs was the first company to sew binders to the wearer's specific proportions and offer sizes larger than an XL. Today, the company is based in Brattleboro and has sold thousands of binders.

"When we officially opened in 2014, we were in that transgender tipping point. Trans people were starting to hit the mainstream," Eli said. "Before us, the binders available were awful-looking medical devices in white, black and ugly beige. And we showed up and went, 'You can have color. You can have something that fits, something that makes you feel good.'"

Binders are most commonly associated with the trans and nonbinary communities, but the Shapeshifters website lists many reasons a person might wear one: to mitigate "gender dysphoria, to 'pass' as a man in day-to-day life, [for] breast reduction and back pain relief, for dancing, for archery, for other sports, because traditional bras are uncomfortable, for sensory reasons, [for] post-surgical recovery, [for] costuming, or simply for the look."

It's important, said Eli and Krista, to find a binder that fits. If it's too large, it won't flatten effectively, but if it's too small, a binder can interfere with lung function, cause shoulder problems and even deform the chest over time.

"There was, at one point, a very long conversation — for years — happening about broken ribs and bruised ribs," Krista said.

But a binder isn't supposed to hurt, and with a custom fit, Shapeshifters can make a garment that does its job without causing pain or injury.

Binder fit is determined by two measurements: one around the rib cage and one around the widest point of the chest. Shapeshifters also offers customization on the neckline, length and strap width. If a binder doesn't fit, the company will take it back to resize.

Based on years of data from selling and refitting binders, Eli developed a finely graded sizing system.

"Imagine if bras [only] came in small, medium and large, and you have an idea of what the binder market was like before we showed up," Eli said. Since then, the world of binders has expanded a lot, and companies offer options at many price points. Shapeshifters also sells sports bras, designed to support but not flatten the chest. 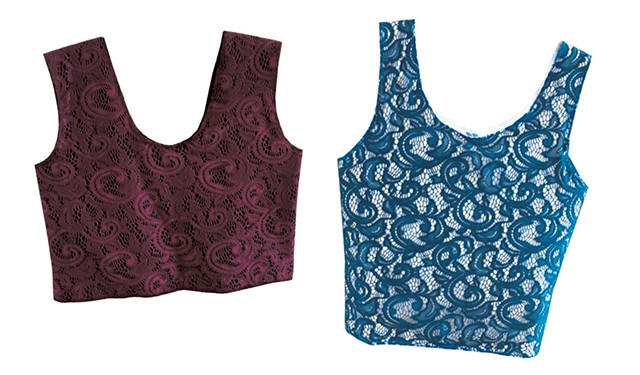 While they lived in New York City, Eli and Krista often visited Eli's family home in Townshend, and they got married there. Eventually, they moved to nearby Brattleboro permanently.

"At the end of every vacation, it was a joke: 'Oh, what if we just stayed?'" Krista recalled. "And then it slowly stopped being a joke."

Before the pandemic, Shapeshifters was selling about 2,000 binders annually out of a studio in Brattleboro's Cotton Mill building. But when COVID-19 hit and it became clear that Eli, Krista and their two part-time staffers couldn't safely work in the studio at the same time, production came to a grinding halt for a month. They created a production schedule with staggered shifts and downsized into a smaller space. They also stopped accepting new binder orders so they could work through the backlog.

"People were super understanding, and that was great," Eli said. "It was like, 'Hello, we're in a hell year. It's a plague. Your order is on our table, and we're doing our best.'"

Like other clothing makers, Eli and Krista also dedicated a lot of their time to making masks, both to sell and to donate to health care staff and other essential workers. With mask sales, a federal Paycheck Protection Program loan and a state grant, they were able to keep the business afloat. At the end of February, Shapeshifters reopened to binder orders.

Eli and Krista are also excited to return to sewing costumes for theater and circus performances. They've made dinosaur costumes for the New England Center for Circus Arts, pinstripe spandex tank tops for a performance of Chicago at Saxtons River's Main Street Arts, and even Elizabethan costuming for a production of William Shakespeare's The Tempest.

For now, the couple said, they're just happy to have kept going this past year.

"We figured out how to run a sewing studio" during a pandemic, Eli said, "and I'm really grateful to everyone who was involved in making that happen for us. And I'm also really proud of us."