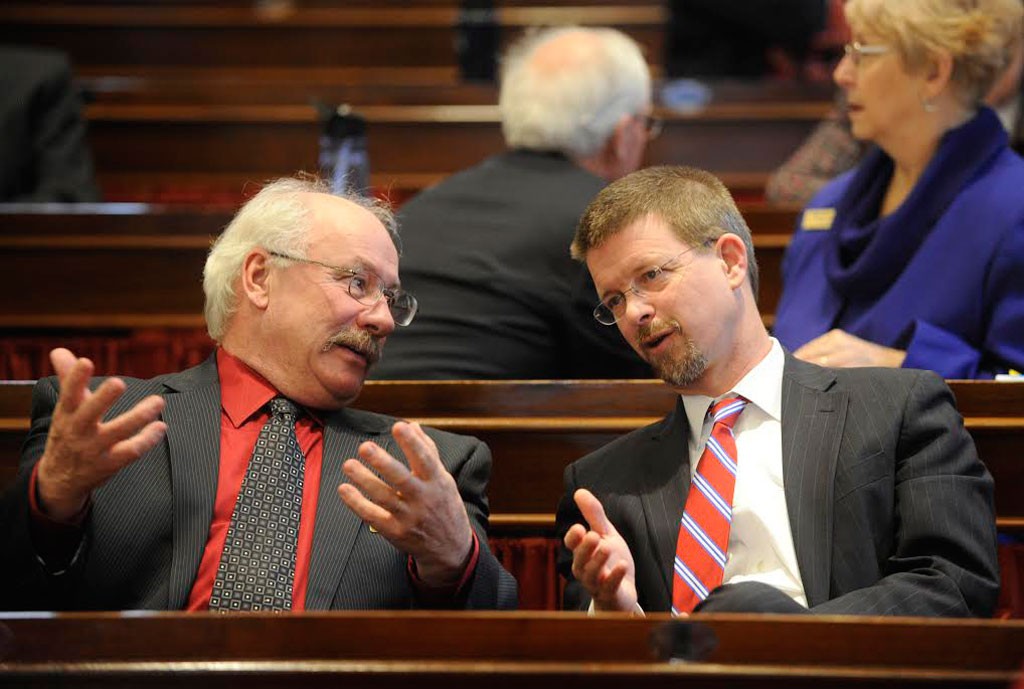 In the nearly five years since Arthur and Theresa Breault closed their beloved department store in downtown Morrisville, a coalition of nonprofits and government organizations has revitalized the sprawling property. The three-building block now boasts affordable housing, first-floor commercial space and a new restaurant called Pizza on Main.

The symbolism will be clear when House Speaker Shap Smith (D-Morristown) formally kicks off his gubernatorial campaign Wednesday in the shadow of Arthur's Department Store: Vermont is in transition, the four-term speaker will argue, and he's the guy to lead the way.

"I want to be governor because this is the place I grew up," he tells Seven Days. "I see a Vermont that has incredible opportunity if we make the right investments in the state."

In order to win what are expected to be hard-fought primary and general election races, Smith himself will have to revitalize his own public persona. Though he's widely respected as a master of the inside game within the Statehouse, he'll have to prove he can win over voters outside his tiny Lamoille County House district, which he's represented since 2003.

"I think he's the right person at the right time, and he'll be a great leader," says Sen. Claire Ayer (D-Addison), who has signed up as Smith's campaign treasurer. "He just has to get out there and be visible."

Smith will also have to counter perceptions that he's no different from retiring Gov. Peter Shumlin, whose popularity has faded in recent years. In a preview of attacks to come, the Vermont Republican Party has for months referred disparagingly to the "Shumlin-Shap Economy."

"I don't think Shap would be a significant departure from Shumlin," says Rep. Patti Komline (R-Dorset), who has previously served as campaign manager for a likely Republican opponent, Lt. Gov. Phil Scott. "I think we'd get more of the same — and Vermonters can't afford more of the same."

Indeed, asked what legislation he'd most like to sign into law in his first year as governor, Smith says, "It would be a bill that would allow people who went to college in-state and committed to stay in-state — giving them relief from their college debt."

"Those are things the current and former governor have focused on in the past, but I don't think we've done enough," Smith counters. The legislature rejected the latter; the former has yet to take effect.

In making a case for his candidacy, the speaker says he's "good at bringing people together, working to set a direction and getting it implemented." That's true: Throughout his tenure, Smith has presided over a no-drama House — in contrast to an anarchical Senate — and has never lost a vote on the floor.

"There's been an incredible amount of work done in the seven years I've been speaker, and I'm pretty proud of the amazing stuff that's been done," he says.

"Here's the thing: All of those things I identified, they wouldn't have happened without me in the leadership role I was in. I fought like hell to make sure that each one of those happened," the speaker says. "It's one thing to say you want to do something. It's another to do it."

Smith is quick to cite his policy differences with Shumlin, with whom he has often waged fierce, behind-the-scenes battles — most recently when Smith and his fellow legislators nearly provoked a veto of this year's budget and tax bills. Among his biggest accomplishments, he says, was defeating Shumlin's 2013 attempt to trim the Earned Income Tax Credit.

Bill Lofy, who served as Shumlin's first chief of staff and is staying neutral in the primary, says he finds it "amusing" that Republicans would paint Smith as Shumlin's errand boy.

"Having been through plenty of legislative scuffles with Shap, I can tell you from personal experience that he is his own leader with his own priorities," Lofy says. "When it comes to trying to get an agenda through the House, Shap Smith is a pain in the ass — and I mean that as a compliment."

Smith, a married father of two and an attorney with Burlington-based Dinse Knapp McAndrew, also points to his "significant stylistic differences" with the incumbent.

"I don't tend to be as — I'm just not as — I'm a more restrained personality than the governor is," the 49-year-old says with a laugh. "Let's just put it that way."

Unlike Shumlin — a brash, smooth-talking pol who loves to press the flesh — Smith is disciplined, deliberate and wonky. The diminutive, goateed speaker has a good sense of humor, but he doesn't exactly animate crowds — and he excels at deploying boring quotes to keep out of an unfavorable news story.

Perhaps, after six years of Shumlin's shoot-from-the-hip style, Vermonters are up for a more restrained, less-colorful chief executive.

What they'd get ideologically from Smith is less clear. He's often pilloried from the right as a tax-and-spend liberal, and he'll certainly have to answer for the many tax hikes he's presided over as speaker. But Smith gets just as much flak from liberals, who see him as a milquetoast moderate, insufficiently committed to their priorities.

"What we need is leadership that doesn't back away from addressing those important issues," says Salvador, a Worcester resident and constituent of Smith's.

The speaker has definitely backed away from single-payer in the years since he helped Shumlin sign Act 48 into law.

"I don't think, at this point in time, the landscape is such that we could move forward with single-payer in the next year or two," Smith says, adding that he does hope to increase access to and reduce spending on health care.

But try as he might, the speaker may find it difficult to move beyond the health care wars that have dominated Vermont and national politics in recent years. Rep. Don Turner (R-Milton), the House minority leader, blames Smith for providing "no oversight over Vermont Health Connect" as the federally mandated insurance exchange has sputtered along.

"We have oversight," Smith says, "but ultimately whether it succeeds or fails depends on the people who are executing the plan."

For now, the speaker is focused on the task at hand: prevailing over potential Democratic opponents, such as former senator Matt Dunne and Transportation Secretary Sue Minter, neither of whom has formally announced their intentions.

To that end, Smith has signed up former KSE Partners lobbyist Liz Sortino to manage his campaign, Democratic operative Selene Hofer-Shall as a fund-raising and operations consultant and Washington, D.C.-based Diane Feldman — a veteran of Shumlin's and Congressman Peter Welch's (D-Vt.) campaigns — as pollster.

"We're getting the organization up and running and starting to talk to people about money," Smith says.

"He's gotta learn how to shed that lawyer exterior and really let people get to know him," Klein says. "And I think that if he's successful in his campaign, which I have every belief he will be, it will be because people have gotten to know the real Shap."

When Smith announces his candidacy, he'll also make clear that he's staying put as speaker for the 2016 legislative session.

"I believe I made a commitment, and I have a responsibility to see it through," he says of his two-year term.

That decision may pose challenges for his candidacy — every decision he makes will be viewed through a political lens — but it will also keep him in the limelight.

Smith wouldn't be the first legislative leader to make such a move. Welch and Shumlin both remained Senate president pro tem as they prepared to run for their current jobs, as did Smith's predecessor, former speaker Gaye Symington, who ran for governor in 2008.

But Turner, the House minority leader, says it would be a "conflict" for Smith to seek higher office while serving as speaker. He worries Smith will hijack the House agenda to support his political campaign.

"I personally feel that if you aspire to be governor, you should step down," Turner says.

Either way, Smith will be viewed by many as a short-timer — and his potential successors will likely spend the session demonstrating they're up to the job.

It's early yet, but the two legislators most buzzed about as Smith's replacement are Rep. Mitzi Johnson (D-Grand Isle) and Rep. Sarah Copeland Hanzas (D-Bradford).

Johnson, a 44-year-old consultant originally from New York, has spent 13 years in the House. She won bipartisan praise this year, her first as chair of the House Appropriations Committee, for her work balancing a challenging budget.

"It's not something I would rule out," Johnson says of the speakership. "But my focus right now, as you know, is making sure we move our budget back to a really sustainable track."

A 45-year-old café owner who grew up in the Upper Valley, Copeland Hanzas has spent 11 years in the House. She won her first term as majority leader last winter, providing her an opportunity to serve as Smith's understudy.

"The question is still unanswered as to whether I will run for speaker, but it'll have a lot to do with whether I'm the last person standing when we figure out who should do the job," she says.

That won't be until December 2016, which means there will be plenty of time for others to make their case. After all, Smith was not exactly the heir apparent when Symington stepped down. The then-42-year-old vice chair of the House Ways and Means Committee initially faced off against four other candidates: then-Democratic House members Mark Larson, Carolyn Partridge, Johanna Leddy Donovan and John Rodgers.

This time around, the caucus could elevate a younger member who has sought a leadership post in the past — such as Rep. Jill Krowinski (D-Burlington), Rep. Kesha Ram (D-Burlington) or Rep. Sam Young (D-Glover) — to speaker or majority leader.

Or it could entrust the speakership to a veteran, such as Rep. Tim Jerman (D-Essex), the caucus' deputy whip, Ways and Means Committee Chair Janet Ancel (D-Calais), Education Committee Chair Dave Sharpe (D-Bristol) or Klein, who chairs the House Energy Committee.

"If the situation occurred where everybody fell by the wayside and I was looked at — if drafted, I would consider it," Klein says.

One thing's for certain: As Johnson says, "The chess board is gonna shift a lot in the next session with everything we have to do."

The original print version of this article was headlined "Shap Talk"