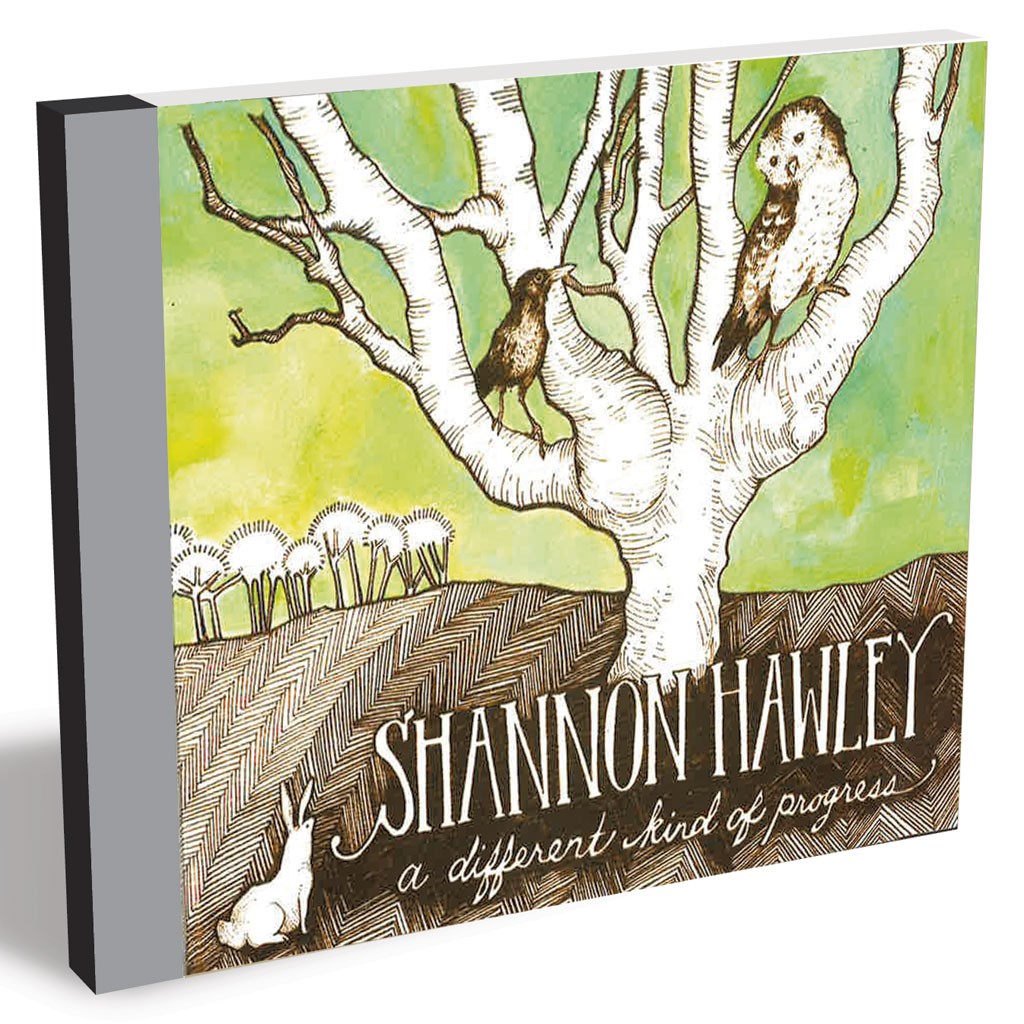 Shelburne-based singer-songwriter Shannon Hawley spent five years writing and recording her debut album, A Different Kind of Progress. While the album title is appropriate for the length of time it took to make, it might more accurately be called Hawley's Fables, in the tradition of Aesop. A Different Kind of Progress weaves stories of the natural world with poetic influences and encounters with animals. It is a fairy tale writ large, a playground for Hawley's whimsy to run wild.

From the opening track, "Conversation With a Crow," it's clear that the experience of A Different Kind of Progress will be one of myth and daydreams. Hawley begins by asking a crow what he would say to her if he could. In place of his answer, she spins her own tale. "I want to run into a fantasy / make a wolf fall in love with me / swim with the mermaids / and steal wisdom from a tree / there are wonders here," she declares.

"Carried Away" takes the listener down the rabbit hole of Hawley's world, where everything is imagined and nothing is certain. Dark, sludgy guitar crashes into her words. "Smoke-filled room / a horse with wings and sad eyes / he turned to me / said nothing here is real,'" Hawley drawls.

Up next is a series of tracks that echo the opener's vision. "Wolf," "Kidnapping a Tree" and "Mermaid's Song" explore those respective scenarios. Hawley's unique vocal presence is key to these diary-like songs. Ethereal and accented, her voice reaches beautiful highs and lows, yet retains a conversational, intimate tone.

Two instrumental pauses, "Rico and Rumi (Sage and Peacock Interlude)" and "Mollusk and the Slug (A Different Kind of Progress)" offer quiet breaks in the storytelling, with poignant violins and acoustic guitar. Yet the instrumentals largely play second fiddle to Hawley's lyrics.

"Winter's White Owl" is a weak spot. The generic images here feel too precious, and it's not Hawley's strongest vocal performance. The closing track, "Rainer's Song (The World You Carry Within You)" is an optimistic meditation on the creative process. "Be patient with all that's unsolved in your heart / love the questions themselves," she advises. The sentiment is pleasant, but given the emphasis on narrative and imagery in earlier tracks, it falls a little flat.

Folk tunes are littered with vague references to the natural world, and such descriptions can easily become trite. On A Different Kind of Progress, Shannon Hawley nimbly avoids cliché by constructing tight storylines that engage with the creatures of which she sings. A product of imagination and poetic musings, this first effort reveals a songwriter first and musician second.

Shannon Hawley's debut album, A Different Kind of Progress, is available at shannonhawley.com. She plays Radio Bean in Burlington on Sunday, June 7. An official release party for the record is scheduled for Saturday, June 20, at the Study Hall in Burlington.