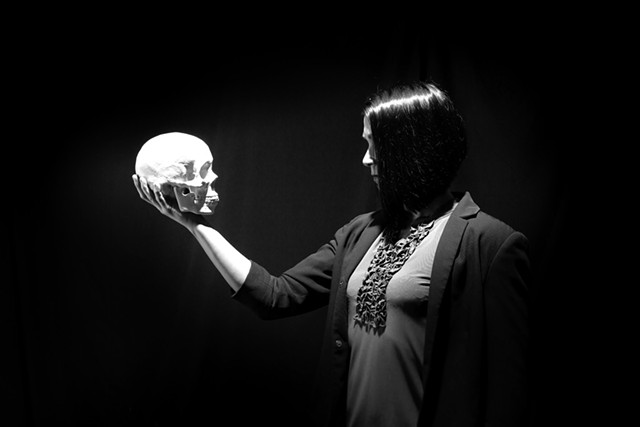 When a play exploring gender roles 400 years ago seems disturbingly familiar, it upsets the notion of progress, to say the least. This week, the Vermont Shakespeare Festival presents a reimagining of Elizabethan England with a staged reading of Shakespeare's Sister, a 2015 play by Emma Whipday. As its title suggests, the work posits a female playwright and how she might have been received. The performance features local actor Aly Perry as Shakespeare's sister, Judith, and VSF veterans Dean Linnard and Nick Piacente, among others.

The production is the third in VSF's "salon" series this year — intimate gatherings at which local actors read aloud plays by, about or inspired by William Shakespeare. After the readings, special guests lead a discussion with the audience.

VSF founders, married team Jena Necrason and John Nagle, began hosting the salons in their living room about two and a half years ago. Their initial aim was to enjoy some lesser-produced Shakespeare plays with their friends and other industry folk. They have since taken their salons to the community at large. Their production of Shakespeare's Sister this Sunday, October 15, at Colchester's Mead Hall, is the third public salon this year.

Necrason believes that the salons have allowed an opportunity "to dive into work by playwrights other than Shakespeare" and to easily perform in different locations. For the past five years, VSF has produced a summertime Shakespeare play in multiple locations, including Burlington's Oakledge Park and the Shelburne Museum lawn. This year, that format was put on hold in favor of the salon series. As Nagle told Seven Days back in May, the company has focused on building its board and resources in order to accommodate a larger, more expansive festival in the future.

So what does a VSF salon look like? "The actors get the script ahead of time and rehearse on their own," Necrason explains by phone. "But this will be the first time we're all reading it together. In that way, it will be very fun and spontaneous, since we don't really know what everyone will bring."

Previous salon productions have included Shakespeare's The Merchant of Venice, in March, and Red Velvet, by Lolita Chakrabarti, in June. The latter explores the fascinating biography of Ira Aldridge, the first black actor to perform Shakespeare in the UK — in 1828, before slavery had been abolished in Britain or the U.S.

Shakespeare's Sister references two literary giants: William Shakespeare and Virginia Woolf. The play was written in response to Woolf's A Room of One's Own: "Let me imagine, since the facts are so hard to come by," Woolf muses, "what would have happened had Shakespeare had a wonderfully gifted sister, called Judith, let us say." She goes on to elucidate how it would have been nearly impossible for a woman to write in Elizabethan England. Judith's ambitions, at odds with the expectations of her society, lead to her suicide.

In a preface to Shakespeare's Sister, Whipday notes her contrarian mission: "I want to tell a very different tale about Judith Shakespeare. My play does not show that a poet's heart is incompatible with a woman's body, and it does not suggest that, for a woman, sex and death must go together."

A feminist manifesto of sorts, Shakespeare's Sister features historically recognizable characters but presents an alternative vision to Woolf's narrative. This Judith does not bow to the expectations of her society but rather lives solely for the sake of her work.

When Necrason saw the world premiere of Shakespeare's Sister at the American Shakespeare Center in Staunton, Va., she was immediately intrigued. "The title draws you in," she says. "Elizabethan England is really successfully portrayed by this writer. It is rigorously and dangerously divided by politics and religion, and that's a very direct connection to things that we're experiencing in the world and in our country."

Necrason was also drawn to the strong female lead and the supporting characters. "They are doing what they have to do to survive, but they also buck the system, banding together to demand recognition," she explains. "At that time, it was illegal for women to be onstage. There were adversarial circumstances pressing on them from outside and from within their group. But, as women do, they create community to solve the problem and prevail."

The play also serves one of the goals of VSF: to address the gender gap in theater. "Things are getting better," Necrason concedes. "More women playwrights are being produced, and major cultural institutions are being held accountable if they unveil a season that doesn't include female playwrights or playwrights of color. We want to be an agent of change in this cultural movement."

Playing with gender in Shakespeare's plays is not a new concept, but Necrason hopes to continue to push the boundaries of what it means to gender-bend these plays. "It can be very powerful for an audience to see a female actor playing the role of Julius Caesar, but it's even more powerful if she doesn't have to play it as a man, or play it as a woman, but play it as a human being," she says. "Don't play the gender at all, but play the character."

In Shakespeare's Sister, it is difficult for characters to comprehend that a play was written by Judith Shakespeare. They believe that it could only have been written by her brother. "We struggle with these expectations still today," Necrason concludes, "and are only beginning to see a shift in the [21st] century."

The original print version of this article was headlined "Theater A Contemporary Play Asks: What If Shakespeare Were Female?"