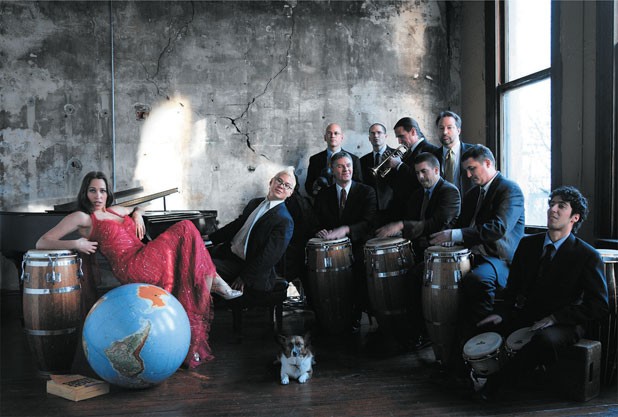 Chances are, you’ve never seen a band quite like Portland, Ore.’s “little orchestra,” Pink Martini. In fact, you would need to see several bands, from virtually every corner of the globe, to even begin to comprehend the sprawling range of influences that the 12-member ensemble embraces. From Latin jazz to French cabaret to Brazilian rumba to classic swing and myriad styles in between, the group is the ultimate musical melting pot. And in that sense, they’re a quintessentially American band, a fact that no doubt serves the globetrotting outfit well in their self-proclaimed role as the country’s musical ambassadors.

SEVEN DAYS: Pink Martini meld so many seemingly disparate influences, yet the result is always seamless. That seems like an unwieldy endeavor. How do you corral those influences into a cohesive piece?

THOMAS LAUDERDALE: Hopefully that does work out. I’m not sure it always does. But I think the overarching goal is to create a cohesive body of beautiful songs with beautiful melodies. And then it all just extends outward from there. I think that because the interests of the band are so diverse — a percussionist who spent some time in Brazil; another percussionist who grew up in Peru; a singer who studied French and Italian growing up who also happens to be African American; a cellist who speaks Mandarin — I think that because of the diversity inside of the band and also the diverse interests and different abilities in terms of language means that having a diverse repertoire is fun and inclusive.

Coming from jazz to classical to Afro-Cuban to French music makes it all that much more interesting for us on stage as well as, hopefully, [for] the audience. On a bad day it can just seem all too chaotic. But hopefully in the larger picture, it is a more accurate representation of America in 2009.

SD: You guys get around quite a bit. How much influence do you take from your travels abroad?

TL: Well, to cite an example, one of the countries in which we’ve had a great amount of success is Turkey. And we’ve been promising Turkish audiences a song in Turkish for several years now. Over the weekend we finally recorded one with the Portland Symphony Orchestra for our fifth album, which will be out sometime probably in the spring. So our travels do definitely affect and infect our repertoire. Usually, when we travel to a new country, we try to communicate, at least a little bit, in those languages from the stage. And then also, ideally a song or two in those languages. That doesn’t always work out. But that’s the goal. Again, as an American band, we’re both diplomats and performers. So that’s the goal.

SD: Pink Martini started out basically as a cover band. But now you’re mostly writing your own original — and largely excellent — material. What were some of the challenges in making that transition?

TL: Well, jumping from the first album to the second album was definitely difficult. I mean, how does one compete with “Bolero” by Ravel, or “Brazil” by Ary Barroso, or “Never on Sunday” by [Manos] Hadjidakis? These are all just incredible songs. So there was a lot of intimidation just in terms of trying to write songs that were diverse, in different languages and, at the same time, somehow relate it to the cohesive whole. I think that the solution was to collaborate with friends from different parts of the world and try to have as much fun along the way as possible.

SD: In past interviews you’ve spoken about Pink Martini as “musical ambassadors.” But most of those interviews date back to the Bush presidency. Has that role changed with Obama in the White House?

TL: Well, during the eight years of Bush there was a lot to talk about, both from the stage and also in interviews. And nationally as well as internationally. Now, just to see the difference between what it was to travel, pre-Bush, versus what it meant to travel during Bush … the difference was striking. Traveling became much, much harder under the Bush years. And it was amazing to see what America lost in that period of time, in terms of her reputation and respect. Now, in a sense, I feel like what we were doing in that period of time was sort of … what Barack seems to be doing now, which is trying to be respectful and aware of the differences and the commonalities.

There was one point where the band was asked to play a Barack Obama event in Portland, which turned out to be the largest event he had in the United States. A crowd of 70,000 people in Portland … We really shared his outlook and approach.

It’s extraordinary, because things seem to be getting better. [Obama’s address] to Muslim leaders was such a huge break, such a huge difference from everything that the Muslim world has experienced from the United States in the last eight years. I think it was a revelation for everyone involved. But now we begin the difficult work of slowly moving through everything and seeing how we go from here. It will be interesting to see.

Catch Pink Martini with Sneakin’ Out this Saturday, June 13, at the Flynn MainStage as part of the Burlington Discover Jazz Festival, 8 p.m. $29/39/49.