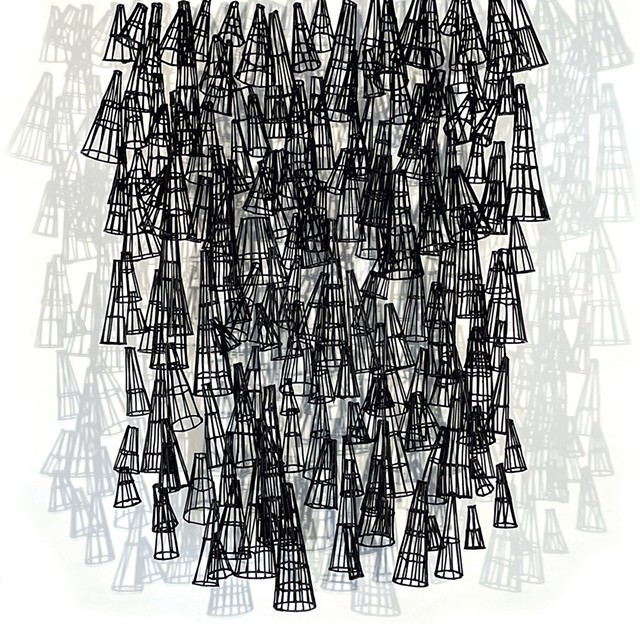 Ceramic sculptor Tara Thacker loves multiplication and repetition; many of her works consist of fastidiously hand-cut, nearly identical components that number in the hundreds. On her website, she describes her process as labor-intensive and "borderline meditative." Those qualities are amply evident in Thacker's current exhibition at the Julian Scott Memorial Gallery at Northern Vermont University-Johnson.

The show, "Darken," includes multilayered sculptures hung on walls or suspended from the ceiling, plus a quartet of collagraph prints. It's hard to say what's more impressive: the painstaking process or the visual allure of Thacker's creations. But perhaps they are one and the same.

Though Thacker's primary focus is ceramics, other materials went into the works in this exhibition, as well — paperclay, sticks, even lead. Thacker also explored printmaking and photography for the first time, she said in a phone interview. And, in their own ways, birds and beavers played assisting roles in the work.

It's no surprise to learn that Thacker is a birder: Two of her wall sculptures pay homage to feathers, in both title and construction. "Remiges (Carcara)" — a reference to the flight feathers on a raptor — is a 50-by-120-inch diptych that can be read as a pair of wings. Each consists of countless thin loops of black matte clay attached to a canvas backing. Though the medium is hard, the piece has a soft look — call it clay bouclé.

"I want you to question the material," Thacker said.

Beside this work is "Retrices (Starling)," referring to the stiff flight feathers in a bird's wing or tail. But forget aerodynamics. The 32-by-44-inch sculpture is made of lead: hundreds of narrow strips of flashing, a thin metal used in roofing. Thacker cut the strips by hand, rounding them on one end. (To this viewer they resemble tongue depressors; Thacker said others have mentioned Popsicle sticks.) She then attached the strips to canvas, layering them repeatedly.

From a bit of distance, the sculpture looks like a cape or shawl stretched across a metal dowel. Each strip of the unpolished lead reflects ambient light so that the whole piece gently shimmers — rather like an iridescent bird feather.

Thacker swore that she did not rob a beaver dam for the sticks in her large wall sculpture "Hibernation." She lives near a body of water in Eden, she explained, and on walks with her dog, she gathers sticks that float up on the banks. "Hibernation" represents about two years of this collecting.

In the 4-by-6.5-foot piece, various lengths of sticks — cut on a band saw — are methodically assembled in overlapping rows, shorter over successively longer. The sticks at the bottom hang at uneven lengths, like a shaggy fringe. Thacker dipped all of the sticks in a bath of black dye, but their hues range from charcoal to warm brown — depending on the type of wood, she surmised. There are patterned markings, too, presumably made by beavers.

Drilling a hole in each stick, like the eye of a needle, enabled her to "sew" the sticks to an unstretched canvas, also black. The artist joked that it was her "first woodworking project," but "Hibernation" more closely resembles a thick pelt. Like the feather-inspired works, it gives a sense of protection, Thacker suggested, "like something you can wrap around."

The remaining works in "Darken" relate to each other, in process if not in form.

"Shadow Baskets (Nocturne)" is the largest, at 6 by 9 feet, but also the airiest. Suspended from a bar near the ceiling, the curtain-like paperclay sculpture consists of dozens of forms hung upside down on lengths of nearly invisible fishing line. While Thacker calls the forms "baskets," they're actually more like outlines of cone-shaped vessels.

"I see those forms like skeletons of a funnel," Thacker said. "I often look to utilitarian items such as tools. But those pieces, particularly, were inspired by these beautiful fish baskets [I saw] during a trip to sub-Saharan Africa."

In a sense, "Shadow Baskets" begat the collagraph prints that flank it in the exhibition. Viewers are likely to notice that the shadows cast by the free-hanging sculpture are repeated in the prints. Thacker said she became fascinated by the shadows' patterns, which loosely resemble neural networks. She photographed them and then essentially copied the images onto a collagraph plate to create what she calls "shadow drawings."

Collectively titled "Mapping," the prints extend the notion of shadow by layering a darker "network" over a lighter one. This layering gives the images a sense of depth and pulls in the viewer's gaze. Thacker further manipulated her prints with hand-drawn outlines of the patterns in white or red. The red outlines are actually short dashes, like stitches. Hundreds of stitches. Thacker's patient, meditative attention to detail is a wonder to behold.

This aesthetic conversation continues with a pair of abstract ceramic sculptures on an adjacent wall. Both titled "Shadow/Shadow," they are shapes that were extracted from the patterns made by "Shadow Baskets." Using projections, Thacker made stencils of the forms in ceramic, she explained. Approximately 22 inches square, each sculpture has a sparkly black coat of Carborundum.

The shadow motif "seems to keep giving something to me," Thacker said. "It's really fun how it's branched out and opened new doors."

Across multiple mediums, Thacker has transmuted shadows, feathers and beaver bites into an elegant and remarkably cohesive exhibition.

The original print version of this article was headlined "Meta Versions"