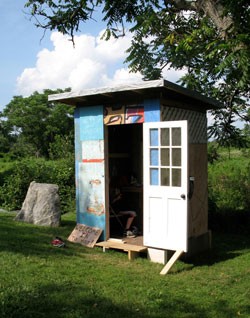 Wrapping up his fourth full day in a 6-by-6-foot wooden studio shed in Stowe last week, Edward Alonzo perched on the plywood ledge that serves as a desk, drawing board and seat, one leg dangling out the open window.

The 29-year-old Burlington artist was working on the maquette for a sculpture, a kind of three-dimensional interpretation of a Greek key, the winding border motif common in the architecture of ancient Greece. The finished work will be a meandering path made of tile and glass that rises and falls like a staircase, he explained, reaching about 5 feet off the ground at its center.

At the moment, though, the maquette was just cardboard and tape on a wooden ledge, and it was hard to focus on, given the stunning view out the window right behind it. The studio sits at the entrance to the Stowe Recreation Path, and the window tempted glances at a brook wandering gently toward the hills.

Then again, perhaps the final artwork wasn’t really what mattered. While Alonzo was inhabiting this structure, he and his process were the work of art.

At least, that’s the goal the Helen Day Art Center, partnering with the Habitat for Artists Collective, seems to be after. The two organizations say the mission they are pursuing in the barebones shed over the next month is twofold: They will provide area artists with access to precious free studio space and serve as “a catalyst for mutual engagement between artists and communities.”

These studio sheds are nothing new in New York; they’ve been popping up around the state since 2008, when artist Simon Draper initiated the first Habitat for Artists project, in the Hudson Valley. But this is the first time they’ve crossed over to Vermont.

In Stowe, the habitat isn’t much to look at — granted, it’s only been up for about a week — and it has yet to inspire hoards of passersby to take an interest in the arts. But it has sparked some unusual interactions.

If it weren’t for the handpainted welcome sign propped against it — and the flung-open door and window — the studio could be mistaken for an outhouse, or a kids’ clubhouse. About a week into the project, it was still relatively unadorned. A dove had been drawn on the front wall by the door, and the rear outer wall was decorated with colorful wooden tiles.

Alonzo said he spent his first two days in the shed reading the magazine Artforum and testing the willingness of passersby to approach the space. At first, he sat looking out the window, his back to the open door. None of the people passing dared disturb him. But later he turned his body a little and put up the welcome sign. Soon enough, people began poking their heads in and starting conversations.

But they weren’t always the target audience.

“Most of the people who come in, surprisingly, seem to have a relationship with art already, and probably have a relationship in some way with Helen Day or the local art scene,” Alonzo said. He could tell because they’d say things such as, “Oh, is this an installation piece?”

“So that’s been a little disappointing,” Alonzo went on. “Even though this is sort of a nontraditional gallery outside, it still puts off some people; it still makes them scared.”

It was looking like that would be the case the afternoon I visited. In fact, I was starting to feel like the whole thing was a bust — until Kurt Santamore showed up.

The nearly 13-year-old Stowe native had visited the shed daily since it opened last week — which seemed odd, given that Kurt described himself as hating art.

But now he was part of it. When Alonzo took up residence in the habitat, he found a note from the previous artist tacked to the wall inside. It introduced Kurt as one of the cooler visitors to drop by and, perhaps unwittingly, he incorporated the seventh-grader into the living artwork. Alonzo recorded each of Kurt’s visits, tacking the tales to the wall.

When Kurt showed up on his bike last Thursday, right on schedule, his blond hair hung wet around his face, and his eyes were red from an hour-and-a-half swim in the nearby river. He plopped himself down on the fold-out chair inside the habitat.

“I’ve been trying to convince Kurt to become a sculptor, because sculptors rock,” Alonzo said. “But he doesn’t like art.”

“I just don’t like it,” Kurt said, grabbing a mess of wire from the ledge. Earlier, with Alonzo’s help, he’d tried to fashion it into a bicycle. Now he crumpled the wire between his hands. When I introduced myself, he explained that he’d been in the local newspaper six times already.

“I did art,” Kurt said, chuckling. “I made a fish. I was forced to do it in elementary school.”

“So why spend so much time in this artists’ habitat?”

“I like hanging out with this guy,” Kurt said, grinning ear to ear.

The habitat may be a tiny catalyst, after all.