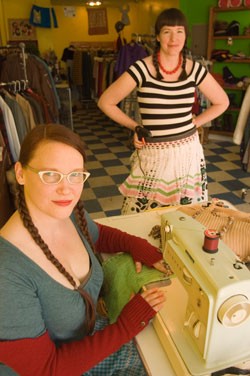 Something subversive is going on at the corner of North Winooski Avenue and Archibald Street in Burlington: sewing.

Sure, at first glance The Bobbin Sew Bar and Craft Lounge seems benign enough: five sewing machines and two racks of vintage clothing. But peek around one of those racks into the cushion-lined, brightly painted lounge and you may find yourself face-to-face with the Anarchist Craft Circle. Its members might be sewing the message “Use it up, wear it out, or make do without!” onto a public-art tree skirt. Or, you might surprise the Queer Crafters bonding over quilt squares made from reclaimed fabric. Then again, you might stumble upon a Stitch-and-Bitch session, at which a handful of men and women alter secondhand clothing while discussing how to end patriarchy.

Who’s responsible for this mayhem? “We’re just two mamas with a vision,” says Gyllian Svensson, referring to herself and Rachel Hooper, The Bobbin’s hip co-owners. The self-described best friends, 35 and 31 years old, respectively, opened their socially responsible business in the Old North End in September, 2007. Their “vision” is to reclaim sewing as an art, teach it to everyone, and use it to effect real social change. And they intend to do all this while stemming the tide of cheap, new clothing — inevitably bound for expanding landfills — by encouraging people to make use of what’s already been discarded. “There’s so much stuff in our lives,” Svensson declares passionately.

I’ve come on a Friday afternoon for the bimonthly EcoSew class. Our task is to make shoulder bags from recycled materials — a project, I’ve been assured, even the least crafty can handle. I’m early, so I witness a little of the logistical triangulating these two mamas need to do in order to run a business. Svensson transfers her 1-year-old boy to the father of her 8-year-old daughter, who then leaves for Hooper’s home around the corner to collect her 2-and-a-half-year-old son, in order for Hooper to get to the store for the interview. “Potty training waits for no one,” Hooper announces cheerfully when she steps inside 15 minutes later.

Hooper also works full-time at the Intervale, and Svensson is earning a Master’s in Socially Responsible Business from Goddard College. Their husbands hold jobs that allow them little time for afternoon diaper changing: Svensson’s works at the University of Vermont; Hooper’s is a chef. So creativity, it seems, is the hallmark of their time-management skills as well as their business.

First we check out the sewing bar’s five machines, rentable for $8 an hour or $40 for six hours — Svensson also hosts birthday parties here, inspired by her daughter and her friends. Then we move to the lounge, a floor-level affair of used futons wrapped in colorful fabric. Inevitably, we begin commenting on each other’s clothing, and it dawns on me that I’m dressed entirely in new-purchase clothes. Fending off waves of guilt, I notice that both Svensson and Hooper are wearing aprons over their corduroy jeans.

“We really and truly enjoy aprons,” Hooper says with a laugh, pointing out that the extra pockets are key when she doesn’t feel like carrying a purse. Svensson, whose tie-on was made by her great-aunt in the 1930s, adds that her first line of clothing will be feminist aprons. “Each one is going to be named for a historical figure and come with a card about who that person was,” she explains animatedly. “My first one is going to be the Margaret Sanger apron, and it’s going to have little condom pockets” — in honor of the birth-control advocate and founder of Planned Parenthood.

The two entrepreneurs are not just tossing around witty ideas; they’ve actually identified a nationwide craze for aprons. (“Just check out TieItOn.com,” Hooper assures me.) The Bobbin itself is one of a growing number of do-it-yourself sew and craft studios popping up in major cities around the country.

But the Burlington sew bar is unique for being fully sustainable: It deals only in recycled and reclaimed materials. The old sweaters piled on the craft table, for example, came from basements and used-clothing shops; they’ll become our homemade bags during the EcoSew. The yarn came from overstock giveaways at local craft stores and from individuals cleaning out their sewing rooms.

“There’s such a surplus of clothing now, and we’re always being encouraged to go out and buy more,” Svensson laments. The Bobbin’s focus on sustainability, Hooper explains, is “kind of a Depression-era rethinking of surplus. Nothing gets thrown out.”

Svensson, originally from Maine, and Hooper, from Florida, met in Burlington as roommates in The House of Girls — a four-woman feminist art collective whose projects included house-cleaning performance art. “We like to play with concepts of femininity,” Svensson interjects with a smile. Both women went to Goddard as undergraduates in the residency program. Svensson finished her degree first and moved to San Francisco; immediately regretting it, she convinced Hooper to move there, too, for company. Hooper was finishing a field study in Bali on the effects of tourism at the time, and her return flight passed through San Fran, so she stayed.

During their three West Coast years, they witnessed the dot-com boom and bust, and watched loft studios get converted overnight into tech offices only to be abandoned weeks later by entrepreneurs-turned-pizza-deliverers. It was a brief but powerful lesson in the pitfalls of being purely profit-driven.

After having children, both women eventually moved back to Burlington — this is “a great place to raise kids,” Svensson declares. When the previous owners of The Bobbin — when it was a vintage-clothing shop run by a sewing collective — decided to sell the place, Hooper and Svensson were the perfect buyers: They wanted to set up exactly the kind of community-centered sewing space the original owners had envisioned.

Svensson and Hooper had several motivations to take on the project. They both wanted to run a business they could bring their kids to. The Old North End provided a welcome environment in this sense; another “mama-owned” business, Viva Espresso, is nearby.

They also felt spurred by raising boys. “We’re assigning value to sewing,” Hooper points out, “and we want it to be a skill that everyone has. That means our sons, too. We want them to be able to knit and crochet and mend, just like our daughters.” Toward that point, she notes that as many men as women have come in for classes on the sewing bar’s five machines.

Finally, Hooper and Svensson wanted to create a space for social gathering inspired by the feminist consciousness-raising groups of the 1970s. “I’m really interested in the history of sewing circles — they were always communal projects,” Svensson says. “It’s always interesting,” adds Hooper, “the discussions you have when you’re working on something with a group of people.”

Despite promises of revolutionary talk and gender bending, I feel a bit like a 1950s housewife getting together with friends when the EcoSew class participants begin to arrive. One mother of three has driven from St. Albans after seeing the calendar listing in Seven Days. Another woman arrives carrying her 1-year-old son, and plops him in front of the lounge’s shelf of wooden toys in red buckets. Her younger sister arrives from Middlebury a few minutes later.

While Svensson begins the class by encouraging us to choose a sweater we like and start chopping it up, Hooper handles the odd customer — a mother trailing three adolescents comes in to rent a machine for a project; a Somali woman finds a pair of used fleece gloves to buy. “Those are a dollar,” Hooper says cheerily, handing her a schedule of December classes.

The talk on our side of the room for the next two hours really does tackle those old personal-as-political topics that seem no less relevant now than they did to second-wave feminists: why women with jobs still handle 80 percent of the housework and child care; how it has taken one mother and her friends a month to plan a night out for a beer; which gendered behaviors are set from the moment your baby is born. I wonder if the talk would sound different if the class were half male.

In no time, it seems, the two hours have flown and I’ve finished closing the seams of my eco bag with a whipstitch that, it turns out, looks all the better for being completely uneven. Now I have only to attach the sliced-off sweater sleeve on each side for a shoulder strap.

I can’t quite promise myself, or the women at The Bobbin, that this will actually happen. But I can at least leave knowing that I’ll think twice about buying a new bag.