Seven Vermont Liquor Rules Designed to Save Us From Overindulgence 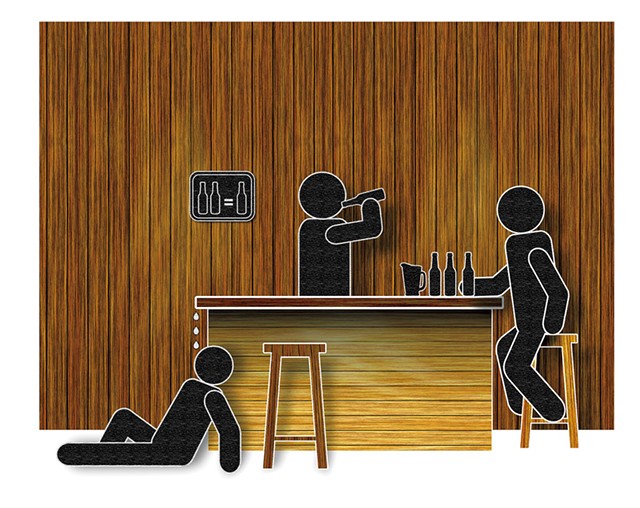 Say you're a sociological researcher and need to observe drunken human behavior in the wild. The first place you might look is a bar. Ironically (and theoretically), that's actually the last place you should look around here: In Vermont it's against the rules to sell alcohol to anyone who is drunk, appears drunk or likely will become drunk if they keep drinking. And if you are drunk, establishments may not just want you to leave; they're required to make you.

So it goes in the Green Mountain State, which arguably has some of the strictest alcohol regulations in the country. Most are designed with public safety in mind, whether by controlling pricing or discouraging quick or excessive consumption of alcohol.

"Bartenders have a very tough job of [serving] impairing substances while not impairing people," said Skyler Genest, director of the office of compliance and enforcement for the Vermont Department of Liquor and Lottery. That department regulates the sale and distribution of alcohol at the wholesale level and also licenses manufacturers, dealers, distributors and establishments that serve alcohol.

"We like to think of our bartenders as a very professional, highly credible ... workforce," Genest continued. "Much like a pharmacist ... we are training these people to, on a routine basis, dole out substances ... [that] can have disastrous effects if imbibed incorrectly."

Seven Days talked with Genest about some of Vermont's stickier alcohol regulations, designed to help bar patrons avoid getting into trouble.

No slurping the drip pan

Ever seen a bartender replace a keg or fill a glass with too much head and pour pint after pint of foam down the drain? Have you thought, I would totally drink that? Well, you can't. Sometimes we need rules to save us from ourselves.

Rationale: It's a rule that goes back at least a century, when bars would sell "swill drinks" — a collection of over-pours, head dumps, etc. — at a reduced price. Problem is, it's impossible for bartenders and patrons to know exactly what's being served; the alcohol by volume of a swill drink could be incredibly high, depending on how much double IPA and imperial stout was dumped in the pan on any given night.

From the regulation: "No licensee shall use a container under any alcoholic beverage taps to catch drippings. The drip pan shall be connected to a plumbed drain to discard the waste in a sanitary manner."

Bartenders can't drink on the job

If you've spent enough time in bars, you've definitely run into the happy drunk who buys people drinks, spills glasses of water the bartender has pointedly placed, and forgets his or her credit card. Such mishaps are precisely why bartenders cannot drink on the job, much less be drunk or appear to be so while working.

Rationale: It's hard for bartenders to check IDs, pour accurately and monitor the inebriation levels of patrons when getting loaded themselves. Duh.

From the regulation: No one involved in the sale or furnishing of alcoholic beverages "shall consume or display the effects of alcohol or any illegal substance while in the performance of their duties."

Order a pitcher of beer in Vermont and you might feel like the kid from Big after he turns into Tom Hanks. It's not that you turned into a giant; it's that pitchers — or any combination of containers — can be no more than 32 ounces. Perhaps the mini-pitcher lobby is stronger than we thought.

In 2014, the Vermont legislature exempted sampler flights for beer, wine and spirits — as long as the flights are no more than 32 ounces combined. So at least we have that.

Rationale: As with construction zones and speed bumps, Vermont would like you to slow down at the bar. Also, establishments are tasked with metering out the volume of alcohol to a single patron to avoid over-service, aka aiding and abetting your drunken night out.

From the regulation: "...No licensee may serve malt beverages otherwise than in glasses, mugs, pitchers, or other containers, of a maximum capacity of thirty-two ounces," nor "serve more than four fluid ounces of spirituous liquor to any individual at one time or in the making of a single mixed drink, nor serve more than two of the above containers to any individual at one time." So much math.

On a weekday almost anywhere in the United States between 3 and 5 p.m., you're bound to find establishments serving discounted drinks to day-jobbers who believe that only schmoes work the last few hours of the workday. We know it as Happy Hour, a time between work and home during which people can get a warm belly at a discount.

Except in Vermont, which is one of eight states to outlaw the hour of happy. The loophole? While establishments can't reduce drink prices for a limited time, they can reduce them for an entire day. So, even if the boss makes you work late that drink special will still await.

Rationale: If drink prices drop for a limited time, consumers might be encouraged to drink more than they normally would. Then, considering the timing of most happy hours, they'd get in their cars when traffic is busiest. And in a state where every road is either full of potholes or under construction, danger lurks.

What could be more Vermont than sliding a sudsy mug of beer down a frozen table to a teammate who catches the mug as it flies off the table, then chugs it? Unfortunately, the extreme drinking sport of gelande quaffing and other public drinking games such as beer pong are banned. Boozing, apparently, shan't be any more fun than it already is.

Rationale: Drinking games generally have one magical power in common: getting humans drunk, and fast.

From the regulation: "No licensee or licensee employee shall offer, permit or suffer on the licensed premises games, contests, or promotions, which encourage the rapid or excessive consumption of alcoholic beverages."

No free beer tomorrow, today or any day

Think your witty banter or eyelash batting might get a drink or two knocked off your bar tab? Think again. Establishments are prohibited from giving out booze for free. Selling alcohol for less than wholesale price (which is set by the state) is also prohibited, meaning bars serving dollar beers are still making a profit. Now you know just how much Narragansett costs.

However, certain Vermont licenses allow for free tastes or samples. So, when a bartender slides you a nip of the new vanilla porter, you can just go ahead and savor it. Probably no one's going to lose their liquor license.

Rationale: Studies have found that the lower alcohol is priced, the more it attracts heavy and problem drinkers and encourages everyone to drink more than they might otherwise. The regulations also prevent establishments from undercutting competitors with lower and lower prices, stabilizing pricing statewide.

From the regulation: "No licensee or licensee employee shall furnish alcoholic beverages to any individual for no charge ... First or second class licensees shall not sell malt or vinous beverages at a price lower than the price in effect at the time of purchase from the wholesale dealer..."

Put a cork in it, please

In almost every way — value and taste, for example — you're better off ordering wine by the bottle instead of the glass when dining out. But sometimes one or two glasses is all you want or can handle without getting sloppy. Thankfully, Vermont allows consumers to take their open bottles home. As long as the bottle is properly capped by the establishment and out of the reach of a driver, Genest said, you're good to go.

Rationale: Say you buy a bottle of wine with dinner and end up drinking just a glass or two. If the open bottle had to stay at the restaurant, you might be tempted to finish the whole thing. This way, the bottle is the only thing half drunk when you drive home.

From the regulation: "Partially consumed bottles of vinous beverages or specialty beers that were purchased with a meal may be removed from first-class licensed premises, provided the beverages are recapped or resealed."