Seven Things Vermonters Should Know About the New Québec Government 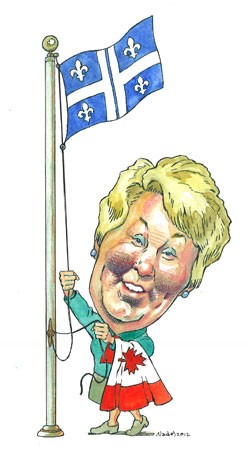 When news broke last week that an apparently deranged gunman tried to assassinate Québec’s newly elected premier at her victory party, many Vermonters probably had the same reaction: Québec had an election?

Last Tuesday, Québecers tossed out the right-leaning Jean Charest and his Liberal Party after nine years in power, for the left-leaning, pro-secession Parti Québécois. The story got a mention on Vermont Public Radio, which noted that Gov. Peter Shumlin was quick to congratulate Pauline Marois on her victory.

Most days, however, the Vermont press largely ignores the politics north of the border — unless a Hydro-Québec power contract comes up for renewal or Canada’s politicians visit Vermont, as they did for a big July conference that sparked a protest that turned violent.

There’s no doubt Vermonters could be better informed about the state’s largest trading partner, beyond their reputation — deserved or not — for being lousy tippers.

This week, Seven Days spoke to politics watchers on both sides of the border, including University of Vermont history professor David Massell, St. Michael’s College political science professor Jeffrey Ayres and Gordon Edwards of the Canadian Coalition for Nuclear Responsibility in Montreal. The goal was to glean some insight from last week’s election.

1. Marois, who has led the left-leaning Parti Québécois since 2007, is Québec’s first-ever female premier. Her election is considered historic, notes Massell, in part because Québec was slow to grant women the right to vote, largely due to conservative pressure from the Catholic Church. It wasn’t until 1944 that Québec women started participating in elections. They were the last in Canada to earn the right to do so.

2. Marois and the PQ support Québec’s secession from Canada, but that’s not likely to happen anytime soon. Québec’s last independence referendum, in 1995, shocked the nation when secession lost by less than one percentage point. Last week’s election gave the PQ only about 32 percent of the popular vote, not enough to form a majority in the National Assembly of Québec or bring the issue to a vote again. Ayres says the PQ’s victory had less to do with widespread support for the sovereignty movement than with voter dissatisfaction with Charest and his Liberal Party, which were plagued by corruption scandals and their handling of student protests earlier this year. Ayres attributes the guard change to “normal pendulum politics.”

Marois has promised to pursue her staunchly pro-Francophone agenda, including the expansion of “Bill 101,” to require all companies — not just large corporations —  to conduct business in French as well as English. According to Edwards, the premier-elect doesn’t speak English well and only debated her opponents in French. Edwards says new French-speaking mandates could scare away some foreign investors and drive some domestic ones to other provinces.

Maybe the lady premier will inspire Shumlin to improve his weak French so he can talk ours noirs — translation: black bears — with Marois. Oui ou non, no one expects the new government to upset the flow of goods, services or wildlife across the border.

3. Marois’ win was a victory for student protesters, but their support didn’t put her over the top. For months, thousands of college students took to the streets of Montréal, and elsewhere in Québec, to protest tuition increases proposed by Charest. The proposed tuition hike — just $325 a year — was modest by American standards. In fact, Ayres and Edwards say the majority of Québécois didn’t support the Occupy-like protests. But public opinion turned in favor of students when Charest cracked down on protests in May by attempting to restrict where students could demonstrate and proposing fines of $5000 to $125,000 for violators. Such draconian measures angered civil libertarians, strengthened the protesters’ numbers and threw student support behind Marois, who promised to rescind the tuition hikes once elected.

4. A PQ government will likely be more pro-environment than its pro-business predecessor. According to Edwards, Marois ran on two key environmental platforms. First, she promised to end Charest’s multimillion-dollar bailout of Québec’s asbestos industry, which is one of the world’s largest suppliers of the hazardous material in the world. Edwards says that association gave Canada “a big black eye internationally.”

Second, Marois promised to cancel the refurbishment of the Gentilly-2 nuclear power plant on the banks of the St. Lawrence River in Bécancour, Québec. The trouble-plagued reactor, which opened in 1983, was slated to close in 2012 until its owner, Hydro-Québec, announced plans to refurbish and keep it running for another 28 years. G-2 releases more tritium into the air and water each day than the estimated amount of tritium that came out of Vermont Yankee during the entire year it was leaking. It’s also the Canadian reactor that is closest to tens of thousands of Vermonters. Not refurbishing G-2 will also be seen as a major blow to Québec-based SNC-Lavalin, the company that builds and exports the CANDU reactor used in G-2. As Edwards puts it, “It will not look good if the CANDU reactor in their own backyard were not being refurbished.”

5. Vermonters shouldn’t expect any big changes at Hydro-Québec — yet. Hydro-Québec is one of Canada’s largest utilities and a major supplier of power to New England. In 2009, it provided more than a third of Vermont’s energy. The citizens of Québec own the utility, so its CEO serves at the pleasure of the premier. Marois probably won’t fire current president and CEO Thierry Vandal immediately. But Edwards suggests that he may be dismissed eventually, as other PQ members would like to see the utility put greater emphasis on solar power and energy efficiency, not just hydro dams. Either way, no one expects Vermont’s energy contracts with Hydro-Québec to be impacted by this election.

6. Ditto for upsetting the cross-border relationship between Québec’s Gaz Métro and its Vermont holdings: Green Mountain Power (which earlier this year merged with Central Vermont Public Service) and Vermont Gas Systems. GMP executives declined to comment publicly on the change in leadership in the province. But one energy consultant for the Montréal-based utility seemed unconcerned that Marois would do anything to roil energy markets on either side of the border. “As Bill Clinton once put it, ‘Do the math,’” he said. “There aren’t the numbers for her to do anything dramatic.”

7. The Marois government holds a weak minority, which means it may not last long. Marois will likely find it difficult to carry out her legislative agenda in the National Assembly of Québéc. Her party has no obvious coalition partner because other political parties oppose much of her agenda. Ayres suggests Marois will need to show the electorate that she can govern on basic day-to-day issues, such as setting a budget and managing education. Coalitions are likely to be built issue by issue.

Canadian Prime Minister Stephen Harper is one of the most ideologically conservative PMs in the country’s history, and Ayres suggests that Marois will try to endear herself to left-leaning Québécois by “driving Ottawa nuts.” As he puts it, “Anything she can do to provoke fights with the federal government can only work to her advantage.” In light of her recent assassination attempt, Marois could begin by tightening Québec’s already tough gun laws, Ayres says.