Seven Shows Not to Miss at the Burlington Discover Jazz Festival

The 2022 Burlington Discover Jazz Festival has a different vibe from that of past years. The annual 10-day celebration of jazz in the Green Mountains kicks off this Friday, June 3. It's guest curated by musician Michael Mwenso, along with his Electric Root creative partner, Jono Gasparro. Together, the two strive to make the festival one that celebrates the "holistic experience of immersing oneself into Black music," according to Mwenso.

"A festival can be more than one thing," said Jay Wahl, executive director of the festival's parent organization, the Flynn. "We want it to be a fun, musical experience for the whole family. But we also want to use the music to educate on not only the amazing history of jazz and roots music but the future we see, as well. Michael is the perfect person to do just that."

To that end, the festival features elder statespeople and masters — such as funk pioneer George Clinton, blues legend Bobby Rush and gospel vocal group the Legendary Ingramettes — representing the traditions and history of Black roots music, in addition to some of the genre's biggest stars and up-and-comers.

"There needs to be a dialogue," Mwenso said. "I wanted all these artists, these deep ones who are part of the legacy of Black music, to be part of this alongside some of the younger artists, the ones carrying the tradition onwards, like Caylen Bryant and Lakecia Benjamin. It's about delivering the entire experience to people: the past and the future."

One way Mwenso aims to accomplish that goal is by having artists pop up at other events during the festival. For example, in the Ancestral Communal Listening sessions at the Flynn's Amy E. Tarrant Gallery, Burlington Records and the BCA Center, vocalist Brianna Thomas, vibraphonist Jalen Baker and Mwenso himself will pair acoustic performances with deep dives into the history of Black roots music.

To accommodate the festival's goals, activities are spread out like never before. While most of the action takes place in downtown Burlington, festival locations include Starr Farm, Leddy and Schmanska parks in Burlington and the Clemmons Family Farm in Charlotte.

There's something for everyone at this 39th annual jazz fest. Read on for seven shows not to miss, as well some unconventional programming at the Vermont Comedy Club and Burlington City Arts' Jazz Lab.

'The Sound of (Black) Music'

Mwenso and company remix the classic Rodgers and Hammerstein musical The Sound of Music, infusing it with blues, jazz, gospel, R&B and hip-hop. Brianna Thomas, Charenée Wade, Vuyo Sotashe and others join Mwenso to create an Afrofuturistic performance that highlights the storied tradition of Black music in American history. "Taking a show with history like this and infusing it with this powerful, ancestral music — the effect is really unique," Mwenso said. Considering Vermont's ties to The Sound of Music through the von Trapp family, this reimagining is a must-see.

St. Louis bluesman Marquise Knox is carrying the flag for blues guitar into the 21st century. The singer and guitarist represents a new generation of Black musicians reclaiming blues, along with guitarists such as Christone "Kingfish" Ingram and Jontavious Williams. Mentored at a young age by famed blues musician Henry James Townsend, Knox has established himself as an artist with one foot deep in blues traditions and the other blazing forward with his own sound. Since cutting his first record, Man Child, at the tender age of 16, Knox has toured the world, sharing stages with B.B. King and ZZ Top and catching the ears of famous blues icons such as Hubert Sumlin and Pinetop Perkins.

Brooklyn's Nikara Warren is a vibraphonist, composer and arranger with serious musical pedigree. The granddaughter of jazz pianist Kenny Barron, Warren creates a modern blend of hip-hop, jazz, ambient soundscapes and Afro Caribbean rhythms — not to mention virtuoso vibraphone playing — to produce a unique sound as forward-looking as it is steeped in the past. On her debut album, Nikara Presents Black Wall Street, named after an affluent Black suburb burned to the ground in Tulsa, Okla., in 1921, Warren took every influence she could muster and made a record that's thought-provoking and danceable. Burlington funk-jazz combo Galacticats open the Saturday show.

Vermont filmmaker and artist Trish Denton has cocreated a visual album with Acqua Mossa vocalist Stephanie Lynn Wilson that promises to dazzle the eyes as well as the ears. Part experimental film, part live-action music video, X-Votive features Acqua Mossa playing a live set while four screens show footage shot by Denton and her crew that tells the story of a time traveler (played by Wilson) searching for six magical relics. Attendees will stand in the middle of the screens — the "time chamber," as Denton calls it — to experience the sounds and sights. The story changes depending on which screen you start with, lending the installation a "Choose Your Own Adventure" vibe. Described by the artists as a "love-letter to our ancestors and the future of planet earth," X-Votive calls to mind experimental music films such as Sun Ra's Space Is the Place. 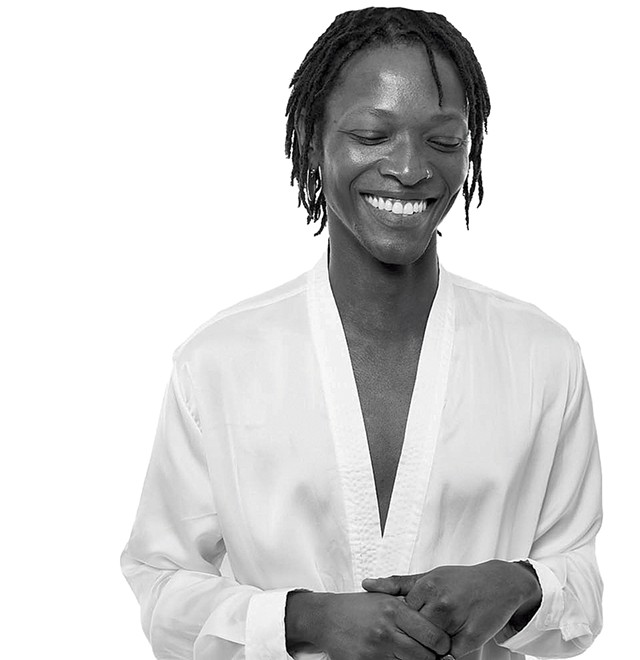 South African vocalist Vuyo Sotashe and North Carolina jazz pianist Chris Pattishall team up for a collaboration that draws as much from the Great American Songbook as from Xhosa hymns. Sotashe is considered one of the best up-and-coming jazz singers and is also a talented theater performer. He arrived in New York City as a Fulbright scholar in 2013, won the audience prize award at the Shure Montreux Jazz Voice Competition in 2015 and acted in the off-Broadway production of Black Light in 2018. He performs a series of duets with Pattishall, highly regarded for his skill in improvisation. In 2021, Pattishall released his debut album, Zodiac, a reimagining of composer Mary Lou Williams' Zodiac Suite. Sotashe and Pattishall's selections span from the earliest hints of jazz in African music to works by more contemporary masters, such as Stevie Wonder.

Representing a new voice in jazz, Lakecia Benjamin is one of the most talented saxophonists in music today, having played with artists such as the Roots, Alicia Keys and Anita Baker. New York City-born Benjamin leads her band, the Soul Squad, through a tour of jazz and R&B masters, adding hip-hop and dance grooves to classic soul sounds from the likes of Maceo Parker and the Meters. Her latest record, Pursuance, is a tribute to John and Alice Coltrane and features some of the best contemporary bandleaders around, including Reggie Workman, Meshell Ndegeocello and fellow alto saxophonist Steve Wilson.

For those attending the free George Clinton and Parliament Funkadelic show on the waterfront, get there early for Benjamin's opening set. You'll have seen one of the best sax players around and gotten a good spot for P-Funk. Win-win! 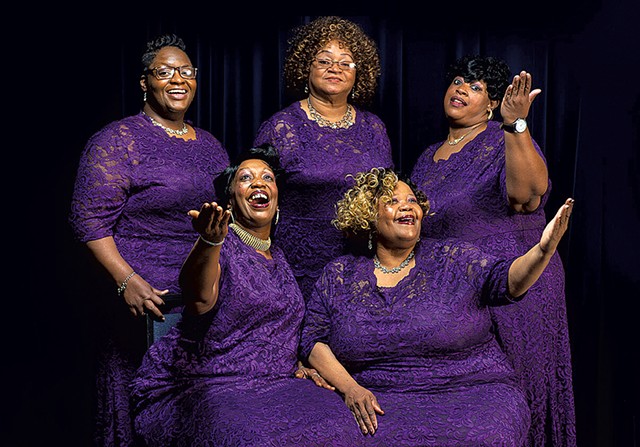 A living link to a true icon of gospel music closes the jazz fest this year. Maggie Ingram, known as the Gospel Queen of Richmond, Va., formed Maggie Ingram and the Ingramettes in 1961, performing and recording up until her death in 2015. The Legendary Ingramettes — a trio fronted by Ingram's daughter, Rev. Almeta Ingram-Miller — celebrate six decades of gospel music history. Lined with funk and R&B underpinnings, the group delivers an ecclesiastic, high-energy performance centered on the three women's powerful voices in the spirit of a Sunday service. The Legendary Ingramettes also perform on Saturday, June 11, at Burlington's Waterfront Park.

The Great Unknown: Big Joe's at the Vermont Comedy Club

Years before there was a Burlington Discover Jazz Festival, the stage at R.W. Hunt Mill & Mining — or as it was better known, Hunt's — was the music hot spot in the Queen City for legendary local acts such as the N-Zones, Pine Island, and Big Joe Burrell & the Unknown Blues Band.

These days, the nightclub in the old Armory building on the corner of Main and Pine streets hosts the likes of standups Kyle Kinane and Nicole Byer. But during jazz fest, the Vermont Comedy Club transforms into a speakeasy of sorts called Big Joe's. The nightly tribute to the Queen City's most beloved saxophonist, Big Joe Burrell, will host great shows and jam sessions featuring many of the performers scheduled to play the fest.

"I wanted there to be a place that could capture the energy of something like Ronnie Scott's," Mwenso said, referring to the famous jazz club in London. "After the shows all finish, the musicians can come hang out at Big Joe's, talk, and vibe and jam."

"Hopefully there will be some impromptu jamming," Mwenso added. "We're going to invite musicians up onstage, as well."

The comedy club transforms into Big Joe's nightly at 10 p.m. and stays open until 2 a.m., functioning as the festival after-party. There are a few earlier performances at the club, too, including a Sunday, June 5, set from Burrell's longtime backing band, the Unknown Blues Band.

A Fest Within the Fest: Jazz Lab at Burlington City Arts

For the first time since 2014, the Jazz Lab returns to the jazz fest. Burlington City Arts, in conjunction with festival cocurators Mwenso and Gasparro, has revived the series, which features panels, films, art installations and plenty of musical performances at the BCA Center.

"This is the 39th jazz fest," said BCA executive director Doreen Kraft. "I've been here since the beginning, and to see the effect it's had on the musicians and the community here, it's really like nothing else. Kids who grew up coming to [the festival] are playing it now! So there's just so much history, and we felt like we needed to acknowledge that."

Some of that history is reflected in a photo exhibit, "From the Archives: Burlington's Discover Jazz Festival," which features images of the fest throughout the years. History is also a focus of a panel discussion on Thursday, June 9: "Jazz in the Green Mountains: Local Legends and the Growth of Jazz in Vermont" features guitarist Paul Asbell, saxophonist Rich Davidian, bassist and mandolin player Will Patton, pianist Rob Guerrina, and jazz singer Jenni Johnson.

"Jazz Lab is a way to augment the festival, a fest within the fest," Kraft said. "It's all about the intersection of this incredible music with art and with community."