Among the illustrative stories in Jonathan Safran Foer's book We Are the Weather: Saving the Planet Begins at Breakfast is one about his grandmother, a Polish Jew who fled her village in 1942 as the Nazis pushed east. "Asked why she left," Foer writes, "she would say, 'I felt I had to do something.'"

At several points in the 2019 book, the writer describes his own daydream "about going from house to house in my grandmother's shtetl, grabbing the faces of those who would stay, and screaming, 'You have to do something!'"

More than three quarters of a century later, in the face of a radically different threat to human survival, We Are the Weather is Foer's "scream" to all of us that we must do something to save ourselves from the climate crisis.

He will share that message at the annual University of Vermont George D. Aiken Lecture on October 8, a virtual event that is free and open to the public.

In addition to his acclaimed novels Everything Is Illuminated (2002) and Extremely Loud & Incredibly Close (2005), Foer, 43, has written two nonfiction best sellers addressing what we eat.

Eating Animals (2009) scrutinized animal agriculture and the ethics of consuming living creatures. The book famously convinced actress Natalie Portman to become a vegan activist. We Are the Weather furthers the argument for not eating animal products, this time focusing on livestock agriculture's contributions to the climate crisis.

Foer summed up his argument in a New York Times opinion piece: "We cannot protect our environment while continuing to eat meat regularly ... Whether they become Whoppers or boutique grass-fed steaks, cows produce an enormous amount of greenhouse gas. If cows were a country, they would be the third-largest greenhouse gas emitter in the world." 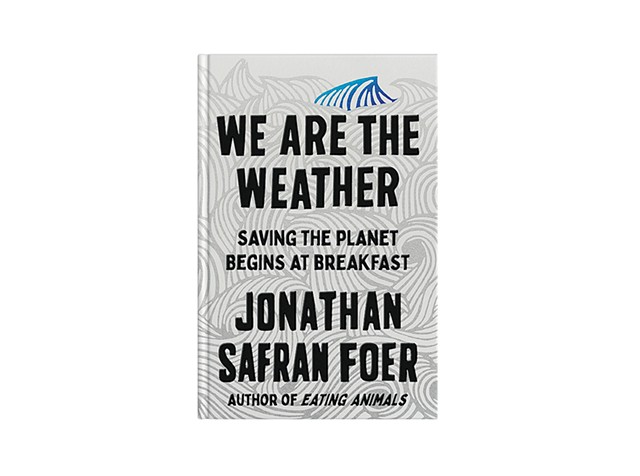 While he acknowledges that buying solar panels and hybrid cars makes us feel better, Foer marshals data to demonstrate that the four highest-impact actions individuals can take are eating a plant-based diet, avoiding air travel, living car-free and having fewer children.

Of those, he suggests, a dietary shift is the most realistic for many Americans: "Everyone will eat a meal relatively soon."

Foer spoke (calmly, no screaming) with Seven Days from his home in Brooklyn about making change one meal at a time, sneaking fast-food burgers and why "we must either let some eating habits go or let the planet go."

SEVEN DAYS: Your book is subtitled "Saving the Planet Begins at Breakfast." What'd you have for breakfast?

SD: You've been vegetarian on and off since you were very young but have more recently been cutting back on all animal products. What made you feel being vegetarian was not enough?

JSF: Nothing is exactly not enough, and nothing is exactly enough. We often rush to these binaries — like "I have to do everything, or I'm just going to do nothing." I think there's a real danger in that, because it can discourage people from making changes that are totally possible for them and that they want to make.

"We must either let some eating habits go or let the planet go." Jonathan Safran Foer tweet this

The reasons why one would choose to [eat no meat] are equally true for dairy — whether it's animal cruelty, the amount of greenhouse-gas emissions produced, [or] what it's doing to rural landscapes [and] to farming in America.

The primary problem with livestock, when it comes to the environment, is the amount of methane they produce. If you imagine greenhouse gases as a blanket throughout the atmosphere, which prevents the heat from escaping into space, creating a kind of greenhouse [that traps warm air around the planet], methane is like a blanket 86 times as thick as carbon dioxide.

There are facts that are in front of us, however inconvenient. We have to find a way to change our lives in response.

SD: You eat vegan before 6 p.m. and then vegetarian for dinner. I did almost a month eating vegan and found it easier to plan and cook satisfying vegan dinners than to eat vegan during busy days when I'd normally grab yogurt and fruit or bread and cheese, or quickly cook eggs. What's your biggest challenge?

JSF: These are really tricky needles to thread, and each of us has a different schedule, different relationships, different personal history, different cravings, different bodies. A good starting point is respecting those differences.

What you said is so true about [it] requiring thought. Harvard Medical School did a study that [found] it was $750 a year less expensive to eat vegetarian. It's also uncontroversially at least as healthy; most people would argue that it's healthier. But we do have habits, and we need to change them a little bit. That takes time.

I used to be a beans-and-rice vegetarian. I've been trying to branch out. Last night I made a spinach pie with dill, parsley and eggs and ate it with roasted potatoes and farro.

SD: In We Are the Weather, you confess that you occasionally grabbed fast-food burgers while traveling to promote Eating Animals. When you really crave meat, is there some magical tactic that helps?

JSF: I probably only did it a handful of times, but I thought it was important to talk about [it] to try to move away from the preciousness of a perfect identity, or maybe even from thinking about these things as identities. That can unfortunately distract us from the shared goal, which is to lessen the amount of destruction in the world.

It's pretty rare that I do [crave meat]. It's mostly when I feel like I'm not participating in a social situation, like a celebratory barbecue or dinner at a friend's house. But there are a lot of things we want in life. Oftentimes, there isn't a magical substitute; I want something and I can't have it, and that's OK.

SD: Much of Vermont's meat and some dairy is raised in regenerative, pasture-based systems that support diversified, year-round local farms; provide an alternative to corporate agriculture; and contribute to a cultural and physical landscape that has significant value to the state. It's hard to imagine Vermont without livestock agriculture, but you believe the climate crisis compels us to do so?

JSF: There are certainly ways of producing animal products that are far, far less environmentally destructive and that can be a lasting piece of our food system. The enemy is not farmers, and the enemy is not animal agriculture.

The enemies are two things. One clearly is factory farming, [which] is now responsible for 99.9 percent of the meat that's eaten in the United States. When we talk about meat, we really are, for the most part, talking about factory farms.

The other problem is overconsumption. We're eating far more meat than we have at any point in the past. The most recent comprehensive analysis that I read of the relationship between food systems and the environment was published at the end of 2018 [in the journal Nature], and it said that people in America and the UK need to eat about 90 percent less meat and 60 percent less dairy. I'm not a great believer in the idea that we're all gonna become vegan, [but] the future will involve less meat.

SD: Do you think that recent events like the pandemic-related shutdown of national meat processing plants and the West Coast wildfires will inspire more people to respond to your call for action?

JSF: I hope so. Do I believe they will? I just don't know. The problem is, by the time we get the evidence that we seem to need — not scientific evidence, but experiential evidence — it really will be too late. For people who live [near the wildfires], I imagine they'll be really alarmed until a week or two after they pass, and then life has a way of just getting back to normal.

Studies have found that [after] communities experience extreme weather events, they are less likely to believe in human-caused climate change; there are such strong incentives to disbelieve. It's the American myth of "We'll rebuild right where we were," but there's no resilience in the face of this. We are not more resilient than nature. We are not distinct from nature. I don't know if humans are capable of learning that.

SD: Your book details the collective sacrifices Americans made during World War II. You cite a slogan developed at the time to encourage carpooling: "When you ride alone, you ride with Hitler." What about a slogan for addressing the climate crisis?

The original print version of this article was headlined "Animal Planet"