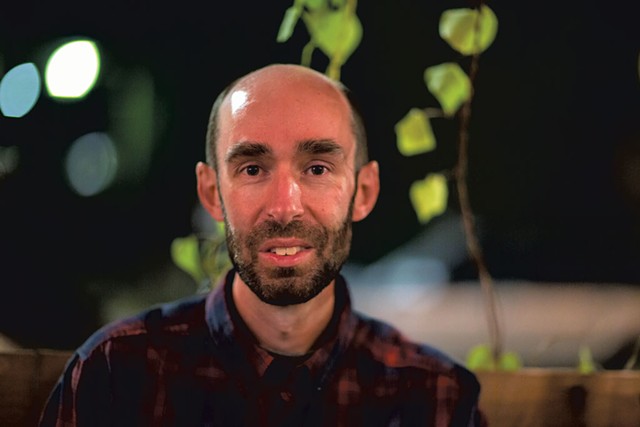 Comedian Joe Gingras has a joke about his lack of hair: "I save a lot of money on stuff like haircuts, shampoo, dates." Self-deprecating, admittedly awkward and shy, the Essex Junction-based comic explains in his sets that he's been bald most of his life. He makes himself the butt of the joke across his material — and it's funny as hell.

Gingras, 43, has served as the University of Vermont's associate head coach of cross-country running and track and field since he graduated from the college 22 years ago. He's also Vermont's Funniest Comedian of 2019, a title he won during the Vermont Comedy's Club's annual competition in August. Gingras came in second in that contest in 2017 and was a top-five finalist in both 2015 and 2018.

A lifelong runner, Gingras turned to comedy in 2012 when, for medical reasons, he had to take a break from running. He's now recovered and, without spoiling too much of his act, he tends to work in a few jokes about that time in his life. (Let's just say he makes a crack or two about having to briefly wear a colostomy bag.)

Gingras doesn't have high expectations for his reign as the state's funniest comedian. Though it's worth noting that his 2018 predecessor, Tina Friml, is going pro after landing a slot at this year's Just for Laughs comedy festival in Montréal — proof that our hometown heroes, no matter how humble, could be the next big thing.

Catch Gingras at the weekly Comedy & Crêpes showcase on Monday, October 7, at the Skinny Pancake in Burlington.

SEVEN DAYS: How and when did you first realize you were funny?

JOE GINGRAS: I've always been pretty reserved. But at some point, probably in my teens, I discovered I could get people to laugh when I'd make certain comments, because it was so unexpected. I honestly still struggle to think I'm funny. Thinking of funny things is easy, but communicating it to other people in a laugh-out-loud way is hard. I learned I was able to write jokes and make people laugh after taking a comedy class in 2012 and getting a good reaction from the crowd at our class show. That makes me good at writing jokes, but being funny is always a work in progress for me, I think.

SD: Which book, film, comic strip or other piece of media from your childhood heavily influenced the way you think about comedy?

JG: I always found Charlie Brown very relatable. I loved baseball and sports and felt like I always came up short, just like he did. I don't think I ever really found the comic strip particularly funny, just somehow very relatable. "The Far Side" is and always will be hilarious.

As for influences, the first 10 or so seasons of "The Simpsons" was big. I have all of those seasons on DVD and have watched them all with and without commentary dozens of times. When Jon Lovitz or Conan O'Brien were on, they wouldn't even talk about the episode. They'd just be hilarious. At one point in my life, I could have had a full conversation about anything using only quotes or references from "The Simpsons."

SD: Can you think of a time when you tried to be funny and it totally backfired?

JG: One time at work I tried to make a joke about why it was so hot in the building, and the words came out wrong. It sounded more like a harassing remark instead of the funny thing it was meant to be. Fortunately, that's nothing like my actual personality. And I mumble a lot, so no one actually heard the words I said.

SD: Finish this sentence: I'm sick of jokes about [blank].

JG: I'm sick of jokes about overly hacky premises, such as men and women are different! I honestly don't hear that in our scene much, if at all, but I've seen more famous comedians doing them. And while I admit to laughing at their jokes, I get mad at myself for doing so. I wouldn't say I'm overly innovative, but I like misdirection and/or being surprised by a joke. Well, that, or jokes about inanimate carbon rods. Stupid carbon rods. I hate them so much! It's all just a popularity contest. That's a "Simpsons" reference.

SD: How thin is the line between offensive and edgy? What's the difference, anyway?

JG: I think the line is fairly solid, to be honest. You can joke about any subject, but it's important how you do it. It becomes much more difficult to do if you're not self-aware, aware in general or just not a nice person. It's true people can and do get upset or offended about almost any subject you might choose. See Ryan Hamilton and hot-air balloons. But people should get offended about certain things, and it's when you can't understand why that's a problem.

Having said all that, I'm certainly not the ultimate authority on where the line is or should be. I'm also not a particularly edgy comic, given [that] one of my edgiest jokes is about clementines and 19th-century children.

JG: I actually have a joke about this. If I could pick any superpower, it would be telepathy, so I could finally stop pretending I understood what people said after I've asked them to repeat themselves three times. Because, at that point, I'm just agreeing with whatever they said. Sure, flying sounds cool, but aside from all the logistical problems it presents, it's not going to get me out of the dinner I didn't know I agreed to.

SD: What's something you could never live without?

JG: The easy answer is probably cookies or sweets, because I love them so much. But that's probably not literally true. The more serious answer is other people. The world can be a lonely place if you don't have other people to share it with. Whether it's laughing, crying or just physically spending time with someone, it makes everything more enjoyable, bearable or fun. Plus, without other people, you don't have an audience to laugh at the jokes you write.