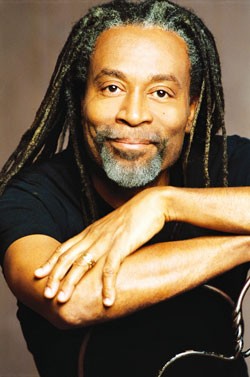 On his new record, spirityouall, vocalist Bobby McFerrin reimagines American traditional music. The 10-time Grammy Award winner puts his unique stamp on beloved classics such as “Swing Low, Sweet Chariot,” “I Shall Be Released” and “Whole World,” many of which were staples in the repertoire of his father, Robert McFerrin, an operatic baritone who was the first black man to sing at the Metropolitan Opera in New York City. The younger McFerrin is regarded as a peerless improviser and boundlessly creative artist. His new project furthers that reputation. It is a joyous and moving celebration of faith, love and the history of our collective American experience.

In advance of his performance at the Flynn MainStage on Saturday, June 1, as part of the Burlington Discover Jazz Festival, Seven Days interviewed McFerrin via email. We asked him about his new record, how he takes care of his voice and a certain happy song.

SEVEN DAYS: I imagine spirityouall to have been an intensely personal project for you on so many levels as it intertwines elements of your faith, family and history. Could you describe the emotional impact creating this record had on you and what it means to you to have completed it?

BOBBY MCFERRIN: I always come to music from a place of faith, with a sense that the very personal and the very universal are closely related. So, in a sense, this project is just more direct. That has a strong emotional impact on me. I like singing these words to people every night. I like the idea of this album out there in the world, and what it might bring to people. I hope it can offer some peace and comfort. I hope people sing these songs themselves.

SD: One reviewer observed that the songs on spirityouall are “part of our collective DNA.” Did digging into this material change the way you look at those songs, or perhaps give you a new appreciation for them? If so, how?

BM: I’d have to answer that song by song. A few of these songs I heard my father sing; they were deeply imprinted on me, but I had to find my own way of singing them. Others I barely knew but thought of as part of a tradition of people singing together that sits really well with me. Some I chose because of the lyrics and some because of a melodic riff I wanted to play with. All of them have come alive for me through the process of recording, and now playing them on tour. These songs are a joy to sing.

SD: It was obviously important for you to put your own spin on the songs on spirityouall. How did you strike a balance between reimagining these songs so that they felt like your own while maintaining the, well, spirit of the source material? Or was that even something you considered?

BM: Of course. But I’ve found that musically, the best way to consider things is just to find my way through, keep singing, keep listening. When it feels right, it feels right.

SD: You’re regarded as an incomparable vocal improviser, and many of the songs on spirityouall, while seemingly carefully arranged, sound as though they were the product of considerable experimentation. What sort of role, if any, did improvisation play in those arrangements? And can we expect some improvisational fun with them in concert?

BM: Gil [Goldstein] is wonderful at walking the line between creating a structure and leaving lots of room. He frames the house but leaves the windows and doors wide open. And many of the arrangements started with jamming, playing around with the material, making stuff up. In concert we really let loose — I’m just loving playing with this band every night. We go all kinds of places. And we’re throwing in some new material as well.

SD: The album’s title is interesting, three words presented as one, with no spaces or capitalization. It’s a play on the word “spiritual,” and I imagine most people would look at it and have their own impressions of what it means. But what did you intend for that to evoke or represent?

BM: Well, I wanted people to think “spiritual” but also to feel the inclusiveness of “you all.” The spirit is in us all. We might think or talk about it differently, maybe some people don’t think about it at all. But it’s there. And everybody has faith. Whether it’s faith in God or in somebody they really trust, it’s part of human nature. I wanted the music on this record to put people in touch with their own spirits, with their own faith.

SD: I’ve always wondered about your vocal range. How many octaves can you cover? On a semirelated note, do you have a specific regimen for keeping your voice in shape?

BM: It’s about four octaves. I use my falsetto register a lot. I sing every day, but I think the most important thing I do to keep my voice in shape is just living right. I drink a lot of water, I eat healthy food, I don’t go to loud places and talk over noise. And I try to keep my spirit right, too; I spend a lot of time reading the Bible, walking in the woods, [and] with my family. All of that helps me sing.

SD: For better or worse, most folks will likely forever associate you with “Don’t Worry, Be Happy,” despite your myriad other significant accolades and achievements. Does that bother you? Do you ever feel that the success of that song is a double-edged sword?

BM: There was a time, back when the song was everywhere, that I was frustrated with it. I wanted people to listen to everything else I had to offer. I felt like they only wanted to hear that song, [and] I felt pressured to be who they wanted me to be. And it was important for me to realize that I was still on my own crazy path, wanting to improvise and sing solo concerts and do all kinds of things. But my crankiness didn’t last long. I’m glad the song has brought joy to people. I’m grateful that it opened doors for me. I’ve got nothing to complain about.

The original print version of this article was headlined "Spiritualized"