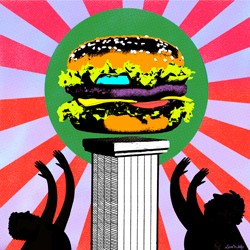 In 2009, Vermonters were abuzz about the newly crowned “Best Burger in Vermont.” According to Food Network Magazine, the state’s supreme patty was the Scibek Sizzler, the Montréal-spiced, cheese-buried behemoth at Burlington’s Shopping Bag.

But who chose it? Probably a staffer who had never been to Vermont. Freelance food writer Melissa Pasanen says she believes the Sizzler won the crown on the basis of a 2007 story she wrote in the Burlington Free Press about reader-submitted favorites.

Late last month, Zagat presented its own rival choice in an article titled “50 States, 50 Burgers,” in which it named a must-try for each state in the union based on the results of a Zagat blog survey. Our interest was piqued by the selection of the relatively off-the-radar Turducky from South Royalton beef-and-beer mecca Worthy Burger. The fatty blend of duck confit and turkey, cooked over a wood fire, makes it “unlike any regular burger,” says co-owner Jason Merrill.

We were curious to see how the Turducky, the Sizzler and other noted local burgers would stack up among our readers. Using Facebook and Twitter, Seven Days embarked on a highly unscientific reader poll to hear the voice of the people.

Many of our respondents were firmly in Camp Worthy along with Zagat, though most preferred the restaurant’s beef burger to the Turducky. The Shopping Bag also benefited from its fair share of fans, tying with Jeffersonville’s seasonal Burger Barn. Montpelier’s Three Penny Taproom and Farmhouse Tap & Grill in Burlington were not far behind.

We took expert testimonials, too: All are food authorities, and several are the faces behind the burgers that were most popular among our readers.

Finally, the Seven Days food writers picked our favorite meals between buns for every occasion. Why not resolve to hit the gym in the new year and indulge in a few now?

Though the $6.50 “Just a Burger” at Prohibition Pig has a no-fuss look, this one-handed eat is so tender, scrumptious and juicy (no small feat for grass-fed meat) that I’ve ordered it on my last three visits. I’m not sure what amps up its flavor so, but the pickles certainly don’t hurt. And every burger should have mustard as a default. — C.H.

The Burger Barn’s food truck parks at the South End Truck Stop and other summertime events, proffering well-seasoned Boyden Farm beef. But the wide range of toppings justifies a trip to its Jeffersonville location. I’ve long been partial to the Samuel de Champlain. It’s a little bit France, a little bit Vermont — with creamy, pungent Brie and a thick nest of prosciutto married to fresh, juicy apples and a spread of spicy maple mustard. — A.L.

Not every patty advertised as “Kobe” or wagyu proves to be the real deal. The burger at E.B. Strong’s does, with light, clear juices that burst almost like those of a soup dumpling. But that’s only the launch point for this exceptional sandwich. Creamy, smoky bacon aioli replaces rashers, and fried pickles lend acid and a fun crunch. Shelburne Farms cheddar ties it together with a slightly sharp edge. The fries can’t be overlooked, either: ultra-thick, crisp potato spears with a whisper of truffle taste. — A.L.

When Vermont Pub & Brewery opened in 1988, these rogues served LaPlatte River Angus beef burgers — and they still do. I ordered one recently during a reporting visit, and it stole my heart. The patty was deeply savory and moist, and the roughed-up fries that come alongside are some of the best in the state. — C.H.

With 32 different burgers to choose from, this Malletts Bay pub is the place for an uncommon combination. I’m particularly fond of the Elvis Burger. The salty half pound of beef is slathered with peanut butter, which serves to affix three banana halves, along with lettuce and tomato. Don’t knock the sweet-and-savory combo until you’ve tried it.

Or you have plenty of other options. How about an Escargot Burger, with melted provolone and snails? Or the Islander, a teriyaki-glazed patty with cheddar, pineapple, sautéed onions and guacamole? — A.L.

The genius construction of this sandwich is even more impressive than the remade Stowe resort itself, and both have every atom imbued with a taste of Vermont. The relatively thin beef patty plays host to an egg poached to the point where it’s slightly liquid but doesn’t run. The pork belly is thick and meaty, not bacon-crisp. But the Green Mountains are most alive in the pile of caramelized, Heady Topper-flavored onions. It’s a delicious idea: a burger and a beer served in a bun. — A.L.

The Depot Burger at Windsor Station Restaurant & Barroom is epic in stature and flavor, a dripping tower of local beef, molten cheddar, crispy bacon and caramelized shallots. I usually run from burgers that look like they could swallow me instead of the other way around, but this one’s an exception. — C.H.

I first tried this luscious specimen two years ago at the Winooski Farmers Market. I was wearing a white dress, and the overflow of hot, meaty juices and MLC special sauce ran down my arms, staining the garment with grease. It was so worth it. Now I just think of the frock as my culinary Lewinsky dress, a keepsake of deliciousness past. Served with a side of herb-speckled fries, very possibly the best in the state, Big Red’s is simply scandalous. — A.L.

I’ve had burgers at Farmhouse Tap & Grill [in Burlington] — it’s really good, very consistent, and that’s what I like about any restaurant. The seasoning is good, and I think they have a great formula, very well balanced. It’s always the same, which I think is so important. There is nothing worse than a burger that is great and, the next time you go, it’s just average. And it’s juicy. It has to be juicy. If it doesn’t drip on your fingers, it’s not a real burger.

I also really like Kismet in Montpelier, and one of the guys here has been telling me I have to try the one at Brewster River Pub [& Brewery in Jeffersonville].

I think the other best burger I’ve had in Vermont [besides his own] was at Worthy Burger. I think it was just the straight-up burger, and we added blue cheese. I’m a fan of cooking over wood and good local beef, like we do at Guild & Company. They apply the same kinds of techniques and product-sourcing ethics. It lends itself to a good end product.

Jason Merrill, co-owner, Worthy Burger, South Royalton: I like the one at Three Penny [Taproom]. Their burgers are good. I like the way they cook it, the way they season it. It’s just simple, clean, good meat on a nice, housemade bun with local lettuces.

Scott Kerner, co-owner, Three Penny Taproom, Montpelier: One of my favorite spots to get a burger is Maynard’s [Snack Bar] on Route 100B in Moretown. There’s something to be said about hanging out on a picnic table, midsummer, looking over the road at the herd you are eating from. Homegrown fries with vinegar, maple creemee for dessert, all in a truly beautiful, tucked-away setting.

Michael Werneke, executive chef, Prohibition Pig, Waterbury: I don’t really eat too many burgers elsewhere; I’m finicky and I’m cranky about food. But the Scibek Sizzler [at Burlington’s Shopping Bag] is a burger done properly. It’s huge, and it’s a really delicious burger. It’s everything you want in a burger.

Melissa Pasanen, food editor of Vermont Life and freelance food writer and editor: The one at Buono’s [Buono Appetito in Shelburne] is good. It’s really juicy and has a lot of inherent flavor without a lot of stuff in it. I wouldn’t have thought to go there for a burger.

I do have a soft spot in my heart for Stony Pond Farm [burgers] at the Burlington Farmers Market. A lot of that has to do with knowing the farmer and how he raises his beef. Obviously, burger night at Bread and Butter Farm [in Shelburne also stands out,] in terms of getting really close to the farm.

I have had really good burgers at Archie’s Grill [in Shelburne]. I like their list, especially the Archie Burger with blue cheese, caramelized red onion and bacon. It’s hard not to get distracted by French fries when you’re talking about burgers, and the house-fried potato chips at Archie’s are really good!

The original print version of this article was headlined "Beefed Up"

Here's how the approximately 311 votes from Facebook shook out (a number of people just said they didn't have a favorite, others mentioned several places, hence the numbers not quite adding up):

Restaurants with one vote:

51 Main at the Bridge

Behind the Scenes Café

On the Rise Bakery

Tracks at the Pitcher Inn