Seth Gallant, Nothing, This Makes Sense 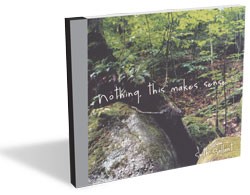 With his second solo EP, Nothing, This Makes Sense, local songwriter Seth Gallant continues to assert himself as a remarkably versatile performer. Last year’s winter elegy Songs for a Snowstorm revealed a softer, more introspective artist than the cannonball local fans know as the energetic front man for indie-pop darlings In Memory of Pluto. Similarly, Gallant’s latest is nuanced and sparse. And though it doesn’t come packaged in a brown paper bag, as did Snowstorm, his sophomore effort retains a certain humble, handmade charm.

Snowstorm, much like his work with IMOP, proved Gallant an economical songwriter. He possesses a rare gift for unearthing lean, catchy melodies with seeming ease. Traces of this ability are evident throughout Nothing. But nowhere is it clearer than on “New Hampshire.” The disc’s simplest track provides an ideal framework to showcase Gallant’s clever writing. A howling-at-the moon harmony section at the chorus is an especially nice touch.

“Pretty Little Things” features the EP’s most overtly catchy hook. But it is tempered by an otherwise laid-back, late-night aesthetic. The contrast is subtle but potent, and ultimately makes the song the EP’s centerpiece.

“Confirmation Song,” a brooding number, is perhaps the disc’s weakest cut — though that impression might be a result of placement between its two finest.

“Miramachi” is a gorgeous little tune bearing shades of Eef Barzelay. Much like the Clem Snide front man, Gallant’s unconventional vocal timbre could take some getting used to for timid listeners. But also like Barzelay, Gallant boasts a playfully literate, heart-on-sleeve charm fully encapsulated here.

“After the Ice Out” closes the record in brief, ramshackle fashion, as a ragged chorus of punch-drunk voices sing Gallant out.

Though In Memory of Pluto seem poised for indie-rock stardom at any minute, Nothing, This Makes Sense suggests Gallant would be just fine making handmade records in his bedroom. It is the mark of a maturing artist.

Catch Seth Gallant at The Skinny Pancake in Burlington with Jamie Kent this Thursday.