Session Americana Eye the Next Level 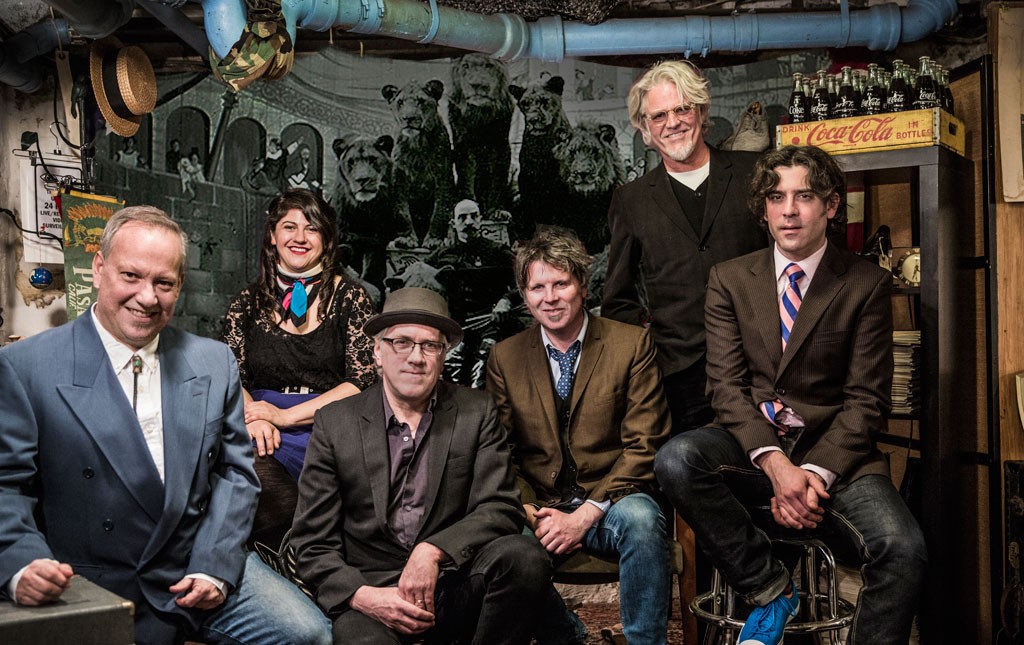 If you've ever experienced Session Americana live in a small club, you've likely been there when the band blasts through fan favorite "Beer Town" as crazed fans roar out the chorus. And you might find it hard to believe that the group has taken such a long time to move on to bigger venues. In 11 years, Session Americana have made seven albums. They've performed hundreds of shows and toured Ireland and the UK. But they have remained mostly a staple of the small-club circuit.

However, after career-boosting appearances at February's Folk Alliance conference in Kansas City and the release of their latest record, Pack Up the Circus, Session Americana might finally be nearing escape velocity. They'll play ArtsRiot in Burlington in support of that new record this Friday, April 10.

Session Americana got started in 2004 at Toad, a tiny club in Cambridge, Mass. The model was the Irish session — musicians hanging at the pub to hoist a few pints and play some tunes. And the players included some of Boston's best performing and studio talent.

Drummer Billy Beard, acoustic picker and vocalist Sean Staples (the Benders) and singer-songwriter Ry Cavanaugh played the first session. Later, vocalist and harmonica player Jim Fitting (Treat Her Right, the The), singer and multi-instrumentalist Dinty Child and bassist Kimon Kirk joined. The wildly eclectic set list drew heavily on cover tunes, from Townes Van Zandt and the O'Jays to Prince, rendered on everything from guitar to pump organ and mandocello.

Onstage, Staples, Fitting, Cavanaugh and Child clustered around a small table with a single mic at the center. Kirk and Beard set up closely behind. For audiences, the arrangement created a sense of rare opportunity: the chance to be there in that hallowed hour when musicians kick back, bare their souls and play music just for themselves.

"It was never meant to be a band," says Child. But it was. People couldn't seem to get enough.

After two years of weekly sessions, the band outgrew Toad's confines and moved to the more spacious Lizard Lounge, just down Mass. Ave. Along the way, the players added more original tunes and began to expand their geographic reach, including frequent trips to Vermont. At the behest of Anaïs Mitchell, the boys made their way to Langdon Street Café in Montpelier, where they played to sellout houses — and, according to legend, engaged in at least one round of booze-fueled after-party sledding.

"The Vermont identity seems to jibe so well with what we do," Cavanaugh says fondly. "They get it when it's funny. They know when it's time to dance. They're not a TV-watching audience, and they're not passively viewing a show."

Still, despite fan enthusiasm, Session Americana still felt like a side project to its members. For one thing, most of the players were busy with more permanent bands. In addition, SA's membership was subject to change — most dramatically when Sean Staples suddenly lost his voice. Staples' reluctant departure left the band with what its members termed a "seat six" problem. They filled the vacant chair with a rotating collection of talent, including guitar whiz Duke Levine, fiddle phenom Laura Cortese and others.

There were other obstacles to growth. For one, jamming six guys, a pile of instruments and a bar table into a van for long road trips was not an appealing idea. Child overcame the table issue by fashioning a foldable one, but a central question remained: Could the living- room intimacy of the band's club shows be recreated at larger concert halls and festival stages?

Last August, Session Americana put that question to rest in Sweden while performing before a crowd of more than 1,500 at the Stockholm Culture Festival. The fan response, says Child, was both surprising and heartening.

"When we got offstage, people were making the same kind of comments we got at club shows," Child recalls. "They were saying, 'You looked like you were having such a great time,' and, 'It was like sitting in a kitchen watching a great bunch of musicians play.' So we realized this thing could work on a big stage, too."

After Stockholm, the band took an even riskier gamble. The annual Folk Alliance convention held in Kansas City in February is the South By Southwest of folk music. Every year, hopeful musicians gather to strut their stuff for booking agents, producers and other industry types. Session Americana ponied up to rent a room and put on two nightly shows. It wasn't cheap, but the results were nothing short of spectacular.

"I was getting accosted by drunk agents in the hotel lobby at five in the morning who were telling me, 'You have to sign with us!'" Child says. And while the fallout from Folk Alliance hasn't yet settled, one result was a booking at this year's Sisters Folk Festival in Oregon — with airfare provided.

Pack Up the Circus, released on April 3, completes the picture of a band on the way up. Working at Boston's Q Division studios and in Cavanaugh's home, the group took a flashmob approach to production. They brought in the Session Americana Collective —folks who've contributed to the group's recordings and live shows over the years, including Levine, Cortese, Jefferson Hamer and Jennifer Kimball. Mitchell coproduced the record, selecting ideas generated during those first sessions and helping the band shape them into full-fledged cuts.

Listen to the album and you'll hear a different side of Session, one that's a bit more restrained and polished than their live shows. Child views that as a good thing. And as might be expected, the playing is top-notch. An overriding note of wistful longing is most evident on Child's "It's Not Texas." But the record displays the band's characteristic sense of humor, too. In this regard, "Vitamin T," Fitting's jazzy ode to all things tequila, is a standout.

With the new record in hand, the Folk Alliance slam-dunk behind them and a European tour booked for next summer, Session Americana are feeling optimistic, says Child.

"I don't think we would have had the confidence, even a year ago, [to pull all this off]," he admits. "It's a real progression. But it's not something I would have expected after 11 years."

The original print version of this article was headlined "Great Expectations"