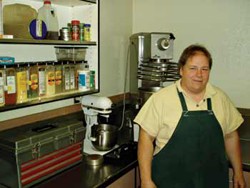 Every day of the school year, 114 hungry little monsters stream in and out of Rachel Claffey’s cozy realm. They descend like locusts on the nacho and taco bar, then move on to the fruit, where they pick clean the spread set out to propitiate their ravenous appetites. Sated — or eager for recess — they abandon the cafeteria as quickly as they attacked it, leaving Claffey to prepare for the next day’s onslaught.

That feeding frenzy belies the calm of South Strafford, a quaint little village north of Norwich, where Claffey is the Food Service Manager at Newton Elementary. Claffey, 44, lives across the street from the school, and she serves food in the very same room where she dined as a grade-schooler. That might make her look like a small-town homebody — but in fact, she’s lived in Fairbanks, Alaska, and elsewhere in the Pacific Northwest, which she says she prefers to Vermont.

Claffey has spent 21 years behind an industrial-size stove in various capacities. She’s been serving the kids at Newton — grades K to 8 — for 12 of them. Before that, she was a catering cook at Dartmouth’s Thayer School of Engineering. She says kids are a much more challenging — and rewarding — clientele than adults, mainly because the youngsters don’t really know what they like to eat, even when they think they do. “If you can get the kids to try it,” she suggests, “that’s three-quarters of the battle.”

Seven Days caught up with this “lunch lady” on a down moment.

Rachel Claffey: I get here at about 4 a.m. I put on the baked good of the day for breakfast — get that out of the way, because we start feeding kids at 7:30. I also prep vegetables for lunch. Our breakfast runs until about 10:45 — they integrate it with a snack, which makes for a higher participation. We serve lunch at 11, and we’re done by 12:20, hopefully. Then there’s always paperwork to be done in this job, so I’ll get out of here any time between 1 and 5 p.m. I also have to look at our menus on a weekly basis and make sure they fall into the 30-percent-fat-or-less rule, and all of that is not so easy sometimes.

RC: On an average of five days, our lunches have to average 30 percent or less coming from fat. We have to serve at least an ounce of bread, we have to serve 2 ounces of protein, and we have to serve two fruits or vegetables. The fruit can be canned, but we like to serve on the fresh side here, which costs a lot, and you have to stay in the budget for your food.

SD: Do you try to incorporate local food into the menu?

RC: We try, as much as financially possible. Lots of times, local foods are a lot more expensive than what you can purchase from Burlington Foods [Burlington Foodservice, a Colchester-located distributor], or whoever. So if I’m paying a higher price for apples from a local farmer than I would from another provider, to be able to have more fresh fruit for my kids, I would probably choose the less expensive method. That’s unfortunately so.

SD: Do the food servers still have to wear hairnets?

RC: No. We have to wear a “hair restraint,” but not necessarily a hairnet. We can wear a hat, use hairspray, have short hair. But, no, we don’t have to wear the big, god-awful hairnets!

SD: What’s a fail-safe favorite food among the kids?

SD: What’s the nastiest food you ever had to serve?

RC: We choose not to serve nasty food. If I won’t eat it, they don’t get it. I mean, we had some really bad ham stuff that came from commodities, and you’d thaw it out and have to wring it out.

SD: Have you noticed a change in the menus with the recent awareness of childhood obesity?

RC: For other schools, yes. For our school, we’ve always tried to maintain a healthy lunch. We’re always looking for ways to improve, and we always look for new things to integrate. I dig out my Moosewood [Restaurant] cookbook and make stuff with whole grains. Like tabouleh, for instance. It’s very good, and they just finally started eating it after three years.

SD: Do the parents voice any interest in what their kids are eating?

RC: Oh, yeah, they do. And my answer to that is for them to come in on any random day. Don’t tell me you’re coming. Just come in and eat. So they can see for themselves.

SD: When was the last food fight?

RC: We have not had a per se food fight. We’ve had a couple of young gentlemen throwing food at one another. So they get to clean the walls, the tables, the seats, the floor on their hands and knees. It was an example. They went and told their friends what they had to do as punishment.

SD: Who has influenced your cooking the most?

RC: My number one just passed away — Julia Child, of course. She went into a world of men chefs and made way for women.

SD: How often do you go to a cookbook and pick something out for the kids to eat?

RC: Well, I must have the best cookbook collection in the state of Vermont. I’m always reading and trying recipes. The first day of school, I tell the kids that they can’t say anything negative about anybody’s food, especially mine. I want to get them to try it first. We had a girl come in with fresh mung bean sprouts. She came over to the window and said, “Rachel, what are these?” I go, “I think they’re a sprout of some type.” And she goes, “My mom packed it. She thinks I’m a horse.”

SD: What’s the most rewarding thing about your job?

RC: Oh, the kids. The kids are the greatest. You get to watch them grow. When you’re a parent and on the outside, you miss a lot of things. If I have the opportunity just to sit and listen to the K-one-twos, it’s just fabulous. I mean, they’re funny — the stuff that comes out of their mouths! The person who developed Rugrats — the cartoon — they must have sat in a hot-lunch room and just listened to kids talk. This is the best job I’ve ever had.

SD: What should people know who haven’t seen a lunch room in a while?

RC: Hot lunch has changed. It’s more than the liver and onions we were fed as kids. We do have standards we have to uphold, and we’re trying to do it on a very small financial budget. People think of us only as hash slingers, but we have to be really, really intelligent for what we do, and we’re always having to go to school just like the teachers. We always have to read about diabetes, food allergies. We’re not the dumb old kitchen witches throwing bad vegetable soup at you when you were younger.