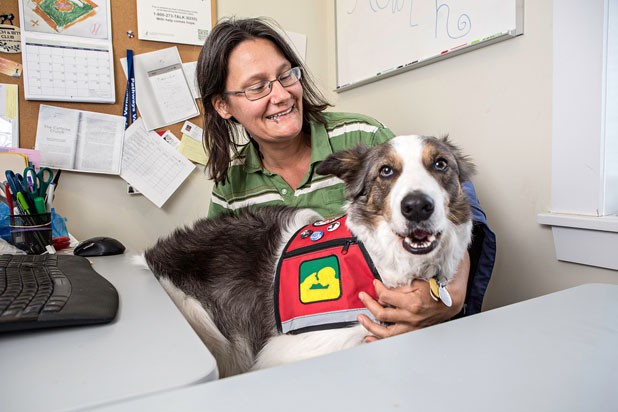 Melanie Jannery of Burlington isn’t ashamed to admit it: Her life was a train wreck before she met Winston. Seven years ago, Jannery, then 33, suffered from depression, severe anxiety, agoraphobia and suicidal tendencies. She was unemployed, smoked three packs of cigarettes a day, was severely overweight and took 26 pills a day to cope. Mostly, she stayed home alone and wouldn’t leave her “dumpy apartment” for fear of having an anxiety attack in public, which would render her confused, frightened and helpless. As a result, she survived entirely on federal disability benefits.

“I was numb from 14 years of psychotropic medications,” she recalls. “I had no hope, nothing. Everything I wanted I’d lost.”

Today, Jannery is slim, tanned and physically active. She owns her own home and car, has a full-time job as a peer-support specialist at Burlington’s Wellness Co-op, is off disability and walks to the Burlington waterfront to watch the sun set. She also smiles, has friends, is active in the community and travels around the country by plane, which once terrified her.

Jannery acknowledges that she still has “mental health challenges” to deal with on a daily basis. But she’s been drug free for more than a year and a half, and she says she’s in the best mental and physical shape of her life.

And she owes it all to a docile, gray-and-white border collie.

“Winston saved my life,” says Jannery about her 6-year-old canine companion, who’s snoozing under the table. “And he continues to every day.”

Winston is Jannery’s psychiatric service dog. Like guide dogs for the blind and seizure dogs for epileptics, Winston is trained to pick up on subtle cues from his handler, and then alert her that something is wrong.

While a seeing-eye dog warns its owner about physical hazards in her path, psychiatric service dogs are trained to recognize the signs of negative mood swings, such as panic attacks, hyperventilation and “dissociation,” or an emotional detachment from one’s surroundings. Winston then helps “reground” Jannery by bringing her back to a calm mental state.

How? Simply by being a dog, she says. He’ll lick her face, paw at her leg, lie on her lap or nudge her hand to encourage her to stroke his coat until she calms down. Sometimes, he’ll even pull Jannery outside so she can regain her emotional bearings, catch her breath and relax.

Psychiatric service dogs are relatively new in Vermont. The state has no certification or formal training program for them, and only a handful of Vermonters are known to use them. Nationwide, however, the practice has taken off in the last decade. In fact, Jannery is active with an online group called Psychiatric Service Dog Partners and now leads a local support group for other psychiatric-service-dog teams.

Jannery’s mental health issues began in childhood. Growing up in Westfield, Mass., she suffered from severe anxiety. At 14, Jannery was raped at work, a trauma she says she didn’t discuss with anyone until years later. At 19, she suffered a severe panic attack on a bus, for which her father scolded her. Later that night, she tried to drown herself in a bathtub.

Soon thereafter, Jannery was diagnosed with bipolar disorder and began the first of many psychotropic medications. She had planned to attend Yale University, but her mental illness forced her to abandon those plans.

From there, she says, she drifted from one relationship to another and developed a gambling habit and a cutting problem. For a time, her clinicians even considered electroconvulsive therapy.

Jannery had grown up around animals and interacted with pets in her human relationships. However, when those love affairs ended, so did her relationship with the animals. It wasn’t until Jannery moved to Vermont and began treatment with Dr. Joe Lasek, a psychiatrist at Burlington’s HowardCenter, that she considered getting her own dog.

About six years ago, Lasek wrote Jannery a letter of accommodation to allow her to live in no-pet housing with a companion animal. At the time, Lasek didn’t know anything about psychiatric service dogs. He just thought a dog might be therapeutic for his patient.

Jannery’s case manager told her it was her “job” to walk Winston every day, which she admits felt like an insurmountable task.

“I was so depressed, I didn’t even know how to play with a dog,” Jannery recalls. Since she had almost no money for dog toys, her case manager suggested she take an old sock, lie on the floor and play tug-of-war with Winston. Soon those interactions began reaching Jannery in ways treatments and counseling had not.

Winston had not yet been trained as a psychiatric service animal; Jannery would eventually do all that on her own through online programs. But even before his formal training, Winston seemed to know instinctively how to comfort his human companion. One day, while talking on the phone, Jannery began having a panic attack and hyperventilating. Winston jumped on her lap, rolled on his back and insisted she rub his belly. Jannery began to laugh, which effectively short-circuited the panic attack. So she took him for a walk.

“Winston became this vessel of safety that would escort me out of the house,” she says. Soon their walks got longer and longer, and as Jannery’s physical health improved, her need for psychotropic drugs waned. Within 18 months, Jannery was off all psychiatric meds.

Today, Lasek is impressed with what the dog has done for Jannery.

How can a dog reach his patient in ways other humans could not?

Lasek isn’t an animal behaviorist, but he suggests that because dogs coevolved with humans over thousands of years, they’re adept at detecting subtle cues that human beings aren’t, especially nonverbal distress signs. Plus, they’re by their owner’s side almost all the time.

“You can’t have a person doing this for you 24 hours a day,” Lasek adds. “Dogs can be there when therapists and helpers cannot be.”

Or when medications no longer do the trick. Maureen Dowd, 66, of Burlington was diagnosed years ago with schizoaffective disorder and bipolar disorder. She had been taking antipsychotics and antidepressants for more than three decades and had a lifelong alcohol problem.

About four years ago, the antipsychotic drug Dowd had been taking for 14 years was discontinued. The substitute meds she tried all had bad side effects. By the fall of 2011, she says, her psychiatrist had exhausted all medical options. Instead, he suggested she try a psychiatric service dog.

Dowd, who’d grown up with male black Labs, began phoning shelters all over New England looking for one. In the spring of 2012, she got a call from the Franklin County Humane Society, which had a female white German shepherd the staff thought would be perfect for her.

Dowd was skeptical — until she met Maja. The 19-month-old dog had been severely abused, was missing patches of fur and weighed just 58 pounds. (She’s now 87 pounds.)

Dowd adopted Maja and began working with a local trainer to encourage and reinforce the skills the dog needed to become a service animal. Evidently, those instincts were already there. Dowd, who’s agoraphobic, experienced a panic attack one day in a public library. Maja instantly led her handler to the elevator and outside until Dowd could catch her breath and calm down. The dog was only 21 months old at the time.

Today, Maja guides Dowd up and down stairs, and lets Dowd lean on her if she gets disoriented or unsteady on her feet.

How is her life different with Maja in it?

“My life has totally changed,” Dowd says. “I’m sober over a year now, and the dog goes to every [AA] meeting with me. I have a lot of friends. And I don’t take any medications anymore … She’s given me a life I’ve never known since I was very young.”

Although psychiatric service dogs are considered service animals under the Americans with Disabilities Act, Jannery says that some businesses and public accommodations don’t immediately recognize someone with an “invisible” disability, and occasionally ask her for documentation.

By law, people with psychiatric service dogs aren’t required to have their dogs vested, or to show proof of a disability. As Jannery puts it, “You don’t have to show your driver’s license every time you drive through a traffic light.” Nevertheless, Winston usually wears his vest whenever he and Jannery are in public.

That’s especially true when she boards airplanes, as she’ll do this week to attend a psychiatric-service-dog convention in Solvang, Calif. Jannery says she and others in her group have encountered problems with some airlines, which now require medical documentation and 48 hours’ prior notice of their travel plans — something not required for other types of service dogs.

If accommodations can be one hurdle for people with mental disabilities who seek a service animal, another is the financial burden. Training, vet bills and the upkeep of a psychiatric service dog can be costly. Dowd says she’s already spent more than $10,000 on Maja, while Jannery has spent at least as much on Winston — none of which, she adds, is covered by insurance or disability payments. Nor are there charitable groups, so far, that will cover such expenses.

Despite such obstacles, Jannery says she’d spend her last penny to keep Winston. As she puts it, “I wouldn’t be where I’m at in my life without him.”