Seniors Close Out High School Apart From Their Friends 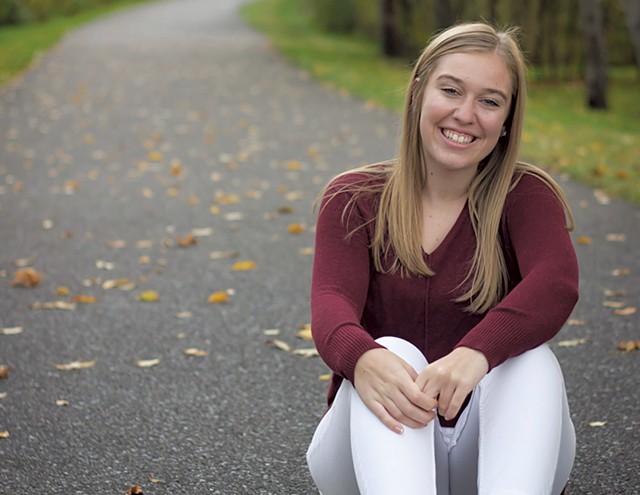 In her locker at Bellows Free Academy, Fairfax, senior Natalie Bates left a few pens and pencils and some notepads — things she didn't pack up on March 17, the last day she attended school.

"I think we all assumed that we were going to go back to school in April, so I didn't do anything extra special when I said goodbye to my friends," Bates said in a telephone conversation last week. "I just said, 'See you in a little while.'

"If I had known we weren't going back," Bates added, "I would've done something a little extra to remember everyone."

She might've gone out to lunch one more time with her friends, or given them a hug instead of waving goodbye. But lunch dates and hugging are a thing of the past in this spring of social distancing. Traditional school is, too.

Bates and her classmates — and thousands of other students in Vermont — were told not to return to school starting March 18, part of the state's effort to slow the spread of the coronavirus. Gov. Phil Scott's directive initially suggested that schools could reopen on April 6. But on March 26, he announced that they would remain closed through the academic year.

The abrupt and unexpected end of the school year means high school seniors — more than 5,000 in the state, according to 2018-19 data — are completing school remotely and apart from their friends. They could miss out on events and traditions that typically culminate a K-12 school career. The BFA Fairfax prom, for example, which was to be held at Champlain College, was canceled. The pinnacle occasion, graduation, is scheduled for June 13 in Fairfax.

The outdoor graduation and the Fourth of July celebration are the two largest annual community gatherings in the Franklin County town, according to high school principal John Tague.

"I think it's bigger than just the students," he said. "It's a time to celebrate for the families, for the community. Kids got on the bus in kindergarten, and now here we are at the end of it. It's marking a milestone."

Graduation and other year-end plans are on hold across the state until May 8, when the Agency of Education will issue graduation guidelines to school districts. The department told Seven Days last week that it was "premature to forecast" what the recommendations will be.

In Fairfax, senior Sage DeCell said graduation is the one thing she's pictured herself doing since she started school. "I've been wanting that moment of accepting that diploma," DeCell said. "It would really crush me if we had to do it virtually."

Tague said he has communicated with the 61 seniors in the class of 2020 that BFA Fairfax will celebrate their graduation — even though he's unsure what form it will take.

"There will be celebrations, and the celebrations will be memorable, given the personality of the class and the situation we're in," the principal said. "They're just a really nice group of kids; they seem to get along with each other, and they've endured a lot of changes over their time in school."

Tague noted in particular that this class will be the first to graduate with educational standards based on proficiencies rather than traditional letter grades.

Since learning became remote, the priority for educators has been connecting with students, Tague said: "We want to make sure that they know we're here."

Students and teachers are on spring vacation this week. For seniors, the weeks that follow are typically a time to wind down and reflect, he noted.

"After this April break, seniors are pretty much done," Tague said. "They can relax and enjoy the last month of school."

But this spring, "all of a sudden nothing is the same," in the words of Kiana Labor, vice president of BFA Fairfax's class of 2020.

She and her classmates are checking in with teachers online, doing schoolwork at home, cooking and watching movies with their families, and texting and Snapchatting friends.

The three seniors — Bates, DeCell and Labor — have known each other since kindergarten, when each started at BFA Fairfax. They've hung out everywhere from the playground to the junior prom. Accustomed to seeing each other every day at school, they haven't spoken in person since March 17.

At that time, DeCell assumed the break from school would last two weeks, and she thought, This will be nice.

"Once the social distancing set in, it was like, It's not nice," she said. "It's not fun to be away from other people."

In individual conversations and a Zoom session with Seven Days last week, the girls reflected on the abrupt end of their high school experience and how they're navigating this strange spring. They spoke fondly of their childhoods with a close group of friends in Fairfax but said they're looking forward to seeing new places and meeting new people postgraduation.

The three are conscientious about social distancing. DeCell and Bates, who have afterschool jobs, said they only leave home to go to work. Labor said that if she goes to the store with one of her parents, she waits in the car while they shop.

"I'm making sure that I'm staying safe so that other people can stay safe," said DeCell, who will turn 18 on May 9. She plans to spend her birthday at home with her family and on the phone with friends.

Labor observed that the coronavirus is affecting families around the world on a "greater spectrum" than it's impacting her and her friends.

"As much as it's awful that I'm not experiencing the senior year that I thought I was going to, I think if we didn't social distance it would be much worse," she said.

'I miss being with my friends'

A prep cook at Mill River Brewing BBQ & Smokehouse in St. Albans, Sage DeCell plans to major in justice studies and biology at the University of New Hampshire. She's interested in a career in forensics.

UNH appeals to her, she said, because it reminds her of Vermont but is far enough from home that "my parents couldn't come and visit me every single day."

During her junior and senior years of high school, DeCell has divided her studies between BFA Fairfax and Burlington Technical Center, where she's a student in the health sciences program. In late winter, the curriculum at BTC began to include study of the coronavirus.

"We did a lot of research on it," DeCell said. "A lot of us were scared and confused."

Teachers at both schools have "lightened the workload" in recent weeks, she said, recognizing that students are under stress.

"I miss being with my friends," DeCell lamented. "My grade is very, very close. Not being able to enjoy our senior year together, and laugh with them and be with them, is really, really hard."

She and Labor are among the four seniors on the cheerleading team, an activity she started in fourth grade. DeCell said she's grateful the team got to cheer during basketball season and celebrate senior night before physical school came to end.

"My team is like my second family," she said. "I see them every single day. Having that second family, where I can joke around [with] people my age, is something that I really value."

One day last week before Natalie Bates left for her job at Hannaford in Essex Junction, she and her sister Mariah, a high school first-year, worked on their homework. Little sister Vivian, a kindergartner, also worked on a school project, constructing a parachute with their father.

"She definitely misses her friends a lot," Bates said of Vivian. "I think it's hard for someone that age, just like it's hard for everyone."

As her sisters finish a school year that represents a level of beginning, Bates is on another trajectory: coming to the end of school life at BFA.

"I never thought I would actually miss going to school," she said.

Since classes let out last month, Bates has been working longer hours at Hannaford to save money for college. In the fall she'll attend Plymouth State in New Hampshire, where she intends to major in finance.

Bates is a cashier at the supermarket and also packs orders for customers who shop online. It's been very busy — and occasionally volatile — at the store during the pandemic, she observed. Customers fight over toilet paper and "aren't always the nicest" to employees. Bates and her coworkers, ringing up orders of $300 to $400, can only go so fast.

"You would think people would be more understanding," she said.

In their old routine, after school ended for the day, Bates and Labor sometimes went to lunch in Burlington or St. Albans. They miss those excursions but note that they're saving money since the trips stopped.

Bates has watched her friends walk across the stage at graduation since she entered high school. She thinks about doing the same with a group of kids she's known since she was a little girl.

"It's the last big accomplishment that you do as a class," Bates said. "Everyone's there, and it's the last time you're with that group of people before everyone does their own thing."

In Fairfax, graduation brings together familiar faces and friends, as well as lots of relatives. "That's super special for me," Bates said.

'High school has seemed so short'

When Kiana Labor was in kindergarten and people asked her what she wanted to be when she grew up, she answered, "cheerleader."

"That was my career plan for many years," Labor said. "It's changed a little bit."

Now she plans to study science — she's unsure what branch she'll specialize in — at the University of Tennessee. She fell in love with the school through online and long-distance interactions.

Labor had planned to visit the Knoxville campus in late March with her father, but the pandemic killed that plan. Instead, she took a virtual tour.

Attending school from home means she can sleep later, but the bonus doesn't offset what she misses: the routine of her school day, seeing her friends in person and bouncing ideas off other people in the classroom.

"I'm someone who works through collaboration," Labor said. "And I feel like it's harder online."

Though plans for graduation at BFA Fairfax are uncertain, Labor said that if she gets to speak at the ceremony, she'll encourage her classmates not to take things for granted — especially the little things that you don't notice until they come to a sudden end.