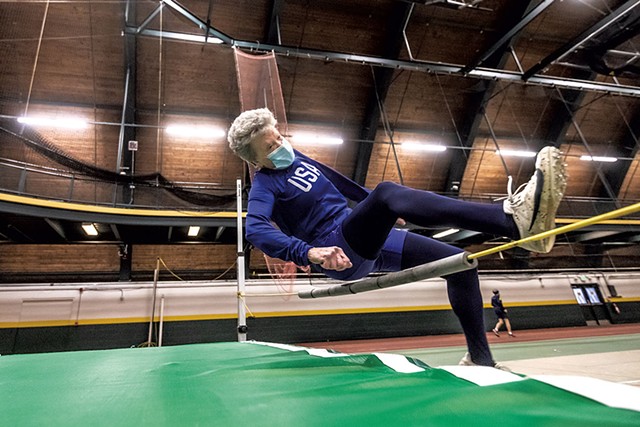 The University of Vermont's Gucciardi Fitness Center was empty at 9 a.m. on a Friday, save for the slight figure of a woman running by herself. The slapping of her sneakers striking the track was the only sound other than the dull drone of the heating system as she finished her warm-up run.

Granted, it was winter break at UVM and brutally cold outside, so it wasn't surprising to see the cavernous recreation facility nearly abandoned. Still, Florence "Flo" Filion Meiler, an 87-year-old grandmother of five, showed up, as she does six days a week.

"Doing all of this keeps me young and gives me something to look forward to." Flo Meiler tweet this

For the past 28 years, ever since her late best friend and training partner, Barbara Jordan, convinced Meiler to give senior games track and field a try, she has made the sport her playground. And she pretty much rules the playground. Meiler has amassed more than 800 medals and set multiple world and American records. In the Shelburne home she shares with Gene, her husband of 61 years, a room dedicated to her success is crammed with trophies and awards.

And Meiler shows no signs of slowing down. Last July, at the USA Track & Field Masters Outdoor Championships in Ames, Iowa, she set two new world records in her age group — in the pentathlon and the 80-meter hurdles. She also set a new American record for the 2,000-meter steeplechase, her current favorite event. 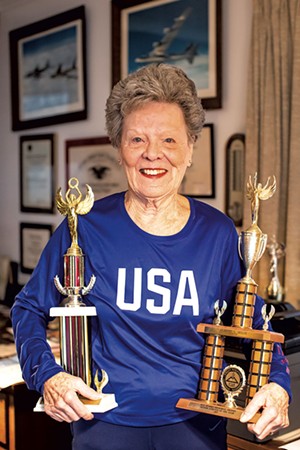 What's Meiler's secret? How does a woman who only began to participate in track-and-field events at age 60 keep going — and excelling? To Meiler, the answer is simple: Work hard but have fun.

"I'm very proud of what I've been able to do," she said. "But people should know that none of this stuff is easy. I train six days a week. You have to work hard and keep at it. But I think my story is proof that it's worth it."

That work starts with nutrition. Meiler grew up in Champlain, N.Y., and built up her strength drinking milk from the farm and hauling hay bales. Her dietary habits weren't exactly those of an athlete, however — something she has since changed.

"Oh, I used to love French fries," Meiler said with a rueful smile. "But I eat a lot less of them now. I have an energy shake in the morning. I also take a lot of vitamins and herbal supplements that help."

Meiler recalled discovering dong quai, a plant commonly used in Chinese medicine for cramps and joint pain, as a "godsend."

"I used to get such awful cramping in the back of my legs until I started using it," she said.

Stretching is of utmost importance, Meiler said. A competitive water-skier for more than 20 years before she and Gene moved to Vermont, she knows how important it is to prepare her body for exercise.

Meiler trains in the summer at South Burlington High School and in the winter at the Gucciardi center and the EDGE Sports & Fitness in South Burlington. Before leaving home, Meiler stretches for 10 to 15 minutes. Once she arrives, she stretches again before her warm-up run.

"I tell everyone: You can do this, whatever you set your mind to," Meiler said as she started to drag hurdles onto the track. "But you have to start slow — that's very important. And stretch, stretch, stretch!"

She then sprinted toward the hurdles and leapt over each one with precision and familiarity. In royal-blue workout gear, emblazoned with a red-and-white "USA" on her chest, Meiler looked every bit the Olympian as she went through her paces.

"Not every competition has all the same events," she explained. 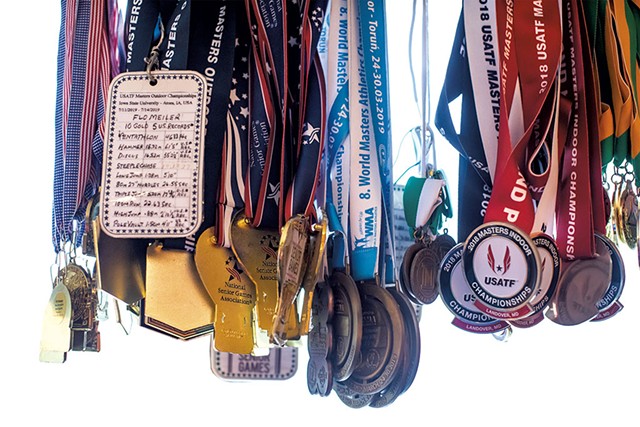 For instance, her next scheduled competition, in March, is the USATF Masters Indoor Championships in New York City. Though it won't include a discus-throwing category, Meiler knows that future events will. So, once she finished her hurdles, she grabbed a discus from her backpack and flashed a wide grin.

"You never know, so I just do them anyway," Meiler said before spinning in place and releasing the discus. It flew through the dusky light of the rec center, hit a net and fell to the track with a metallic thud.

As Meiler moved on to practicing the long jump, she took a moment to reflect on Jordan, who first asked her to try the jump nearly three decades earlier.

"I always dedicate these to my best friend, Barbara," Meiler said as she traded her sneakers for track spikes. "Gene and I were playing tennis at the senior games at Middlebury College. Barbara asked me to try long jump, and I said, 'Are you crazy?' I was 60 years old and had never even run track before."

Nonetheless, she finished her game of tennis, walked over and completed her first-ever long jump. She fell in love with it instantly and has never looked back.

Now the American record holder in the sport for her age group, Meiler approached the long jump with evident skill. Sprinting faster than some half her age, she bore down on the rectangular sandpit. As she leapt through the air and careened toward the sand, Meiler let out an involuntary grunt that was almost a laugh. She was in her element.

"You want to push yourself but also enjoy it," Meiler said. "Doing all of this keeps me young and gives me something to look forward to. Winning is great, but you can't lose sight of having fun, too."

The last part of her training that day was her favorite: the steeplechase. A grueling race, the steeplechase involves sprinting five laps around the track, more than 2,000 meters. Five barriers line the track, one of which is normally followed by a small pool of water.

Even more than the pentathlon — a combined event that features hurdles, high jump, long jump, shot put and an 800-meter race — the steeplechase challenges Meiler in a way that excites her. It's also the only event in which she's ever been injured, some years ago, when an errant leap led to a leg injury requiring stitches. 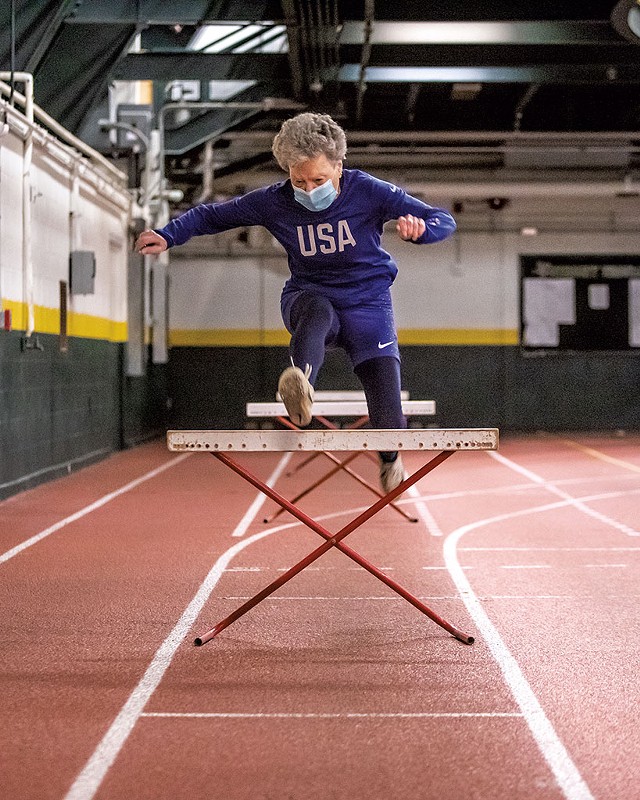 Though she expressed some chagrin at the lack of water hazards to train with, Meiler said she was grateful to the university, as well as to South Burlington High School.

"It's really important to have somewhere to train," she said. "During the pandemic, I was so fortunate that I could use the EDGE in South Burlington, just like I'm so lucky UVM and South Burlington High let me use their facilities."

For seniors who don't have the access that Meiler enjoys, or who just want to know how to begin a fitness regimen, she advised seeking out local senior centers. Those in Charlotte and South Burlington offer games for seniors that are less competitive or physically daunting, she noted.

"You have to be sure to rest, too," Meiler said as she finished her workout. "I always take it easy for a few days before a competition. Afterwards, I'll take three or four days off without working out, just to let my body recover."

Meiler looked over to a pile of medals she had brought to show. It was her latest haul, from Iowa, where she competed in 12 events and won 11 gold medals.

"I'm not doing this for nothing," she said. "I'm trying to win and to achieve something. But what I really get out of it is all the people who tell me I motivated them to get off the couch."

As she pushed the barriers back to the side of the track, Meiler paused and turned around.

"That's really why I like talking about this," she said. "I want to do anything I can to influence people to exercise. I want to be an inspiration."