The owner of a major company in Cleveland and his wife flew on his private jet into Burlington International Airport on a recent Sunday to look at some of the state's priciest properties. Their daughter attends Middlebury College, and they've fallen in love with Vermont, says Wade Weathers Jr., who has sold luxury real estate for 35 years. He showed the house seekers a $3.3 million house in Shelburne with spectacular views of Lake Champlain; a Charlotte home concealed by trees on 800 feet of shoreline, listed at $2.5 million; and an 11-acre estate, priced at $1.75 million, on the waterfront in Panton.

Later that day, the executive and his wife flew home to the Midwest. They also have a place in Florida, Weathers says. After working with them for about six months, he hopes they'll soon plant their third flag in the Champlain Valley.

Obviously, these aren't typical buyers. Homes in the "luxe" category — listed at $1 million or more — represent about 1 percent of all Vermont residences sold, agents estimate. In the past 12 months, just 85 of these luxury houses have changed owners across the state. Most are priced between $1 million and $2 million, with a few more topping $3 million, according to statistics from Four Seasons Sotheby's International Realty.

Drawing from a small pool of potential purchasers, real estate agents who specialize in the luxe market have honed their insights into the moneyed mindset. When a customer can fly home anywhere in the world, the competition isn't just another gorgeous house in the next town. It's a coastal cottage in Maine, a ranch in Montana, a ski chalet in Wyoming, even a villa on the French Riviera. 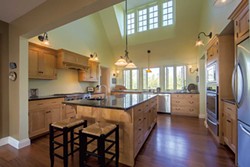 And Vermont — where property taxes are as steep as the green hills — can be a tough sell. The most expensive houses may seem like bargains compared with similar properties in more popular destinations, but some buyers still balk at the additional annual expense.

"[For] most of our buyers, this is less than 1 to 2 percent of their holdings, but they still don't want to overpay," says Averill Cook, one of Weathers' colleagues at LandVest, a Boston-based company affiliated with Christie's International Real Estate.

"It's a buyers' market," agrees Kathy O'Brien, an agent with Four Seasons Sotheby's.

These agents must be quick with information but never pushy. Big-money buyers take their time. They make thoughtful investments. They research. They're under no pressure to buy when it's a second, third or fourth home. It's a matter of the right fit and the right opportunity.

The average time it takes to sell a home in this category is 18 to 24 months, compared with less than a year for less-expensive houses, the agents say. Even in boom times, these properties would take nine months to sell, Weathers says.

The recession hit the second-home market hard. In 2009, O'Brien's sales dropped 50 percent, forcing her to "reinvent" herself and sell across the price spectrum, she notes. Her current listings range from a $5 million five-bedroom house in Shelburne to a $250,000 condo in Burlington's South End. 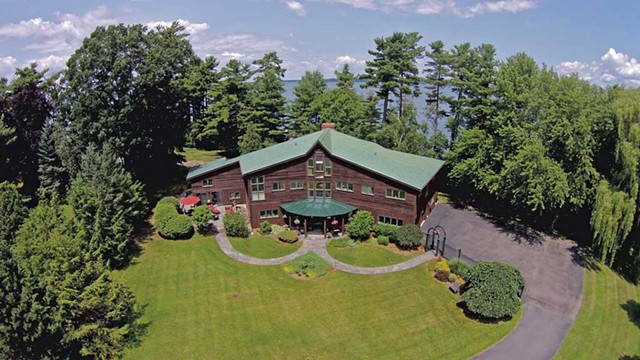 Sales bottomed out in 2010 and are still recovering, Weathers says. "We have fewer buyers in the market, and we have this overburden of inventory. And that depresses prices."

About 65 to 70 percent of Weathers' and O'Brien's sales come from out-of-state buyers. Brian Boardman, another high-end agent and an owner of Coldwell Banker Hickok & Boardman Realty in Burlington, lists more homes close to the city and sells to locals about half the time.

All of these agents in Vermont, though, see a certain type of high-end buyer. He or she is usually 50 to 60 years old, either late in a lucrative career or retired early. Those who are younger and still working typically own their businesses, telecommute or travel enough to live anywhere.

The out-of-staters often have a connection to Vermont — they attended the University of Vermont or another local school, or they currently have a kid in college here. They may have made their fortune in Manhattan or Boston "and always dreamed of coming back," Boardman says.

Some buyers fantasize about owning an old "gentleman farm" in Vermont's rolling hills, or a spot near the slopes. Ski areas have held their value pretty well since the recession, Weathers says. (An 8,000-square-foot chalet in Stowe is one of the most expensive homes for sale in the state, listed at $12.5 million.) Most who have the money, though, want to sit beside the lake while they sip their morning coffee. 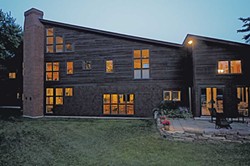 That's where a local agent's expertise in water depth, cliff drops, mooring spots and sandy beaches comes into play, Boardman says. He knows, for example, that the custom-designed boathouse with a rooftop deck at a $2.15 million home on Burlington's Oakledge Drive is unique on Lake Champlain, where rough water can damage such a structure. 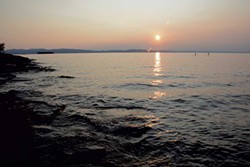 "At this price point, what people are expecting is an incredible view," O'Brien says. "Then privacy, I think, is No. 2. And right up there with privacy is the style of the home. People are so focused on having light and open floor plans."

Some recent million-dollar-plus listings near Burlington boast a rooftop pool, a complete home-theater system, or an all-season porch with unique glass panels and two huge fireplaces. Giant master bathtubs have fallen out of favor, O'Brien notes, replaced in some houses by cavernous, stone-enclosed showers.

But some of today's high-end buyers tend to opt for smaller footprints rather than sprawling, 15,000-square-foot estates, she adds. And they care more about energy efficiency and smart technology.

A home that O'Brien has listed for $1.8 million in South Hero welcomes would-be buyers with three solar panels out front. At the Oakledge Drive property with the boathouse, the sellers who built it — he's an engineer who owned a local steel fabrication company — ran radiant-heat tubing through the floor on both levels.

Discretion is also key for high-end buyers — both during the home-shopping process and after move-in. Many of the priciest properties sit at the ends of dirt roads or long, private driveways. They rarely have "for sale" signs.

High-end agents never ask what a buyer does for a living or probe for financial information. Really rich folks rarely reveal their net worth. On the contrary, they show up on weekends like any other home buyers, dressed in jeans, T-shirts and flip-flops. They aren't carrying Louis Vuitton bags, O'Brien says.

Even if some of her buyers fly in on private planes, the agent describes them as "soulful, very down-to-earth" people who embrace Vermont for its lack of ostentation, unspoiled landscape and laid-back attitude. They appreciate the state's billboard prohibition and environmental protection, she says.

O'Brien recently showed homes to a Chicago couple in their early sixties who still do triathlons and like the idea of biking the Green Mountains. "They love the beauty of what Lake Champlain is," she says.

Around Chittenden County, Boardman says, he can also pitch the proximity to civilized amenities: top-notch health care at University of Vermont Medical Center, a convenient airport and farm-sourced cuisine rivaling that in many big cities. 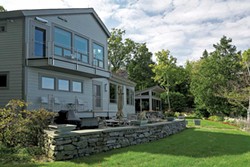 The downside is the taxes — even for the well-heeled.

Before the recession, few buyers cared, O'Brien says: "People were just spending money. Now they watch where their money goes. I don't care how much you're making. Everybody's doing that."

Weathers says taxes killed a deal he started with a New Jersey man who planned to swap a house in New York's Hamptons for a place in Shelburne. Then the man learned that his taxes on the Shelburne house, listed at just under $4 million, would ultimately add $50,000 a year to his expenses — about twice the bill for his Hamptons house.

But one of O'Brien's potential buyers, a CEO from Connecticut, recently told her, "I don't mind paying the property taxes, because I know where my money's going in Vermont."

For those who have the dough and really love this state, it turns out, money is no object.