Seller's Remorse: Shumlin Bought a House — and a Whole Lot of Trouble 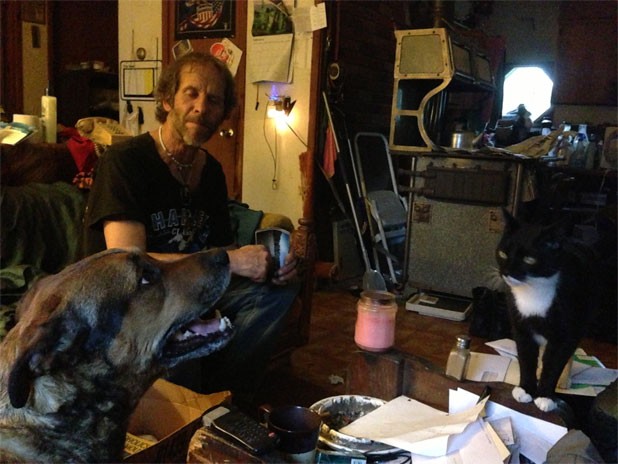 Perhaps the saddest part of last week’s Dickensian drama involving a wealthy governor and his destitute neighbor is that none of it seems terribly surprising.

Anyone who’s followed Gov. Peter Shumlin’s career for any length of time knows that the guy loves nothing more than a deal, and thrives on living dangerously.

How else can you explain why an ambitious politician would cut a land deal with an ex-con in the thick of his reelection campaign? Or why he would negotiate with a man who appears to have diminished mental capacity — without insisting that the man retain legal counsel?

But that’s exactly what landed the governor in a heap of trouble last week when the man, along with his relatives and friends, told reporters he now regrets selling his family’s land to Shumlin for less than a quarter of its assessed value. Further magnifying the political peril of the situation was confirmation from U.S. Attorney Tristram Coffin that “the FBI followed up on a tip” about the situation, though, he said, “there’s no active investigation in our office.”

In a series of one-on-one interviews Shumlin granted members of the media late Friday afternoon, the governor argued the entire episode was an example of his own generosity. Dressed in a casual green-and-red plaid shirt in his office overlooking the shining Statehouse dome, Shumlin said he was motivated by the urge to help the man turn his life around.

“To tell you the truth, I couldn’t walk away from the guy,” Shumlin said. “I just felt like, here was a neighbor in terrible straits. It could work for him and it could work for me, and I was in.”

Talk about chutzpah! With a neighbor like that, you’d be wise to build a taller fence.

At the center of the drama is 53-year-old Jeremy Dodge of East Montpelier, who by his own admission, “has been in and out of jail since [he] was 16.” Last summer, Dodge had the dubious luck to find that Shumlin and a group of friends and campaign contributors had bought up 182 acres next door and split off 27 of them for Shumlin to build a 2200-square-foot “governor’s cabin.”

At first, their neighborly relationship seemed mutually beneficial. Dodge was scrounging to get by on the $10,000 he earned working part-time at the Salvation Army in Barre, and Shumlin was happy to pay him to help clear the land.

“He’s helped me a lot, at different times, when no one else would,” Dodge says of Shumlin.

Last fall, the town of East Montpelier sought to collect $17,000 Dodge owed in back taxes by auctioning off the 16-acre property. Dodge turned to the governor for help. Shumlin resisted at first, encouraging Dodge to reach out to his family instead, but the governor eventually acquiesced.

With a tax sale looming, Shumlin presented Dodge with a $32,000 offer scrawled on the back of a file folder. Several weeks later, on the day after Shumlin won reelection, the two closed on a $58,000 deal. At the time, the property was appraised at $233,700, though a subsequent reappraisal requested by Shumlin slashed its value to $140,000 because of the house’s terrible condition.

“It sounded good to me, it really did,” Dodge said last Thursday during an interview outside the squalid home in which he grew up and raised his own children. Wearing a black Harley-Davidson T-shirt and a pair of faded jeans, the gaunt, toothless man struggled to articulate himself through a crippling stutter.

Dodge said he’d felt relieved when Shumlin said he would let him stay in the house through July 15. But the temporary reprieve came at a steep cost: Built into the purchase price was a $9000 charge for nine months of rent. (Another $9000 was contingent upon Dodge cleaning up the place.)

“That would keep me out of jail — for a year, anyway,” said Dodge, who said winding up homeless would violate the terms of his parole.

By Christmas, Dodge said, he’d soured on the deal. After consulting with friends and family, he realized a tax sale would have let him stay on the land for a full year — three months longer than Shumlin offered — and would have given him a chance to raise the money to pay his back taxes and nullify the sale.

“I screwed up,” Dodge said. “I should’ve found a way to find somebody, somehow, to help.”

In interviews last week, Dodge’s friends and family accused Shumlin of taking advantage of a man they said lacked the capacity to fend for himself in negotiations with a governor who owns more than $5 million worth of real estate.

“Everyone wants to know the same thing: Was Jerry Dodge capable of making this decision? In the 40 years I’ve known Jerry, I think not,” said Berlin resident Bernie Corliss, a lifelong friend of Dodge’s. “If you grew up with Jerry, you know there’s a mechanism in his brain that’s not working correctly.”

Shumlin disagrees with that assessment, saying, “I have never had any reason to doubt Jerry’s understanding of exactly what he was doing.”

Making matters worse, Dodge negotiated the deal without an attorney.

He contends that Shumlin suggested they simply use the governor’s attorney to arrange the deal. Shumlin, meanwhile, says he tried his best to talk Dodge into finding a lawyer, but Dodge refused.

“I met with her a couple times before signing,” Dodge said of Shumlin’s lawyer. “She advised me [to get] legal counsel and all this stuff, you know. Like I say, I couldn’t afford one, so I went with what was written and signed where I need to sign and get it over with.”

It’s hard not to sympathize with Dodge’s plight.

A tour of his house makes clear that he is either unable or unwilling to take care of himself. The place is fetid, littered with refuse and reeks of dog and cat urine. And everyone involved concedes it was far filthier last fall, when the power failed and the septic system backed up.

Worse yet is that, until recently, nobody seems to have been rushing to Dodge’s aid. In the past week, his friends and family have become omnipresent in the media. Corliss — this scandal’s Linda Tripp or Kato Kaelin — has appeared in nearly every news story, opining to any reporter who will listen about Dodge’s mental capacity. His daughter, Rochelle, tearfully told WCAX-TV last Thursday she’s now working to get her father into an assisted-living facility.

But where were they all before the cameras descended upon East Montpelier seven weeks before Dodge’s scheduled eviction?

And why didn’t town officials point out to Dodge that his $4597 annual tax bill could have been dramatically reduced had he simply declared his property a homestead and filed for property-tax abatement? As former Republican state representative Oliver Olsen has pointed out, Dodge’s $10,000-a-year income should have made him eligible to pay no more than $500 a year in taxes.

The answers may be even more troubling than the questions: After a string of arrests — most recently for domestic abuse — those who know him best may have grown tired of trying to help. And the town in which he lived may have been happy to see him go.

“What I can tell you is that Jerry is not a saint. He has done awful things to people — mostly women,” Shumlin said. “When Jerry is sober and off drugs, he’s a compelling and interesting guy to be with. I’ve been told that when he is on substances of alcohol and drugs, you don’t want to be near him — and that’s Jerry’s challenge.”

Stepping into the breach — at least in his own version of events — was an unlikely hero: Shumlin himself.

The way the governor explained it Friday afternoon, as he summoned reporter after reporter into his Pavilion State Office Building suite, “There was no one else in line to engage to help, and the outcome for Jerry would’ve been very bleak.”

Had he not bought the property and restored Dodge’s electricity, the governor said, the man wouldn’t have lasted weeks in the place — let alone another year. And now that Dodge is having second thoughts about the deal, he says he’s perfectly happy to extend his neighbor’s stay and revisit the deal — so long as Dodge has a lawyer present.

Shumlin’s narrative is compelling, but there’s one detail that truly rankles.

Since Vermont Press Bureau Chief Peter Hirschfeld broke the story last week, there have been conflicting news accounts about who approached whom about the possibility of Shumlin purchasing the property.

On Friday, the governor confirmed it was he who first brought it up to Dodge after he “started hearing rumors about a tax sale” and visited the town office to inquire about it.

“I brought it up with Jerry when we were cutting wood one day,” Shumlin said. “As a courtesy, I wanted him to know that if his house was coming up for tax sale that, you know, I was an interested party … I didn’t want him to feel like I was looking into it around his back.”

Shumlin’s interest in the property should come as no surprise. Its 16 acres are not pretty, but they sit right beside his newly built cabin. Each structure is visible to the other through the trees.

What’s troubling about this timeline is that even in Shumlin’s own telling, it looks less like he was dutifully responding to a neighbor’s request for help and more like he was scoping a new acquisition for his real-estate Empire. That might explain why the gov didn’t bother treating Dodge like any other constituent and explain how he could reduce his tax burden.

Shumlin, it seems, set the hook and then reeled in his fish. Rather than risk a bidding war at auction — or the possibility that Dodge could raise enough cash in the subsequent year to cancel a tax sale — the gov managed to buy the place for a song.

And he even managed to look like a hero — at least in the eyes of Jeremy Dodge.

It would be easier to assume good intentions if Shumlin himself didn’t make it so damn hard. But in his brief two and a half years in office, the governor has cultivated a reputation for talking out of both sides of his mouth.

In this year’s legislative session alone, he showed a willingness to accuse others of raising taxes when his own proposals would raise them far higher. And he was perfectly happy to falsely claim just two weeks ago that a proposal to cut taxes on most Vermonters — but raise them on his wealthy contributors — would result in a net tax increase.

It would be nice to believe that Shumlin was the one decent person in this whole sad mess, but he hasn’t given us much reason to do so. We can only hope that the resolution of this saga