Art Review: Sandra Berbeco, “Been There: Three Series of Paintings” 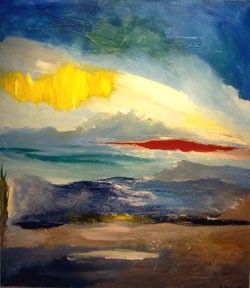 Sandra Berbeco’s solo show, “Been There: Three Series of Paintings,” at Burlington’s 215 College Gallery features 40 works inspired by sunny Old World locations such as Greece, Italy and Albania, as well as cloudier points closer to home. Though the artist describes the show as “acrylic paintings confronting issues of flooding, neglect and the absence of life in locations real and imagined,” the pieces are not nearly as dire as that billing suggests. They are simplified, abstract landscapes, expressive rather than descriptive of any particular place.

Berbeco’s three series are differentiated by scale. The smallest pieces are as tiny as 4 by 6 inches; a collection of canvas-under-glass works are 16 by 20 inches; and the largest paintings range up to 34 by 50 inches. The shifts in scale seem indicative of differing focal points in the landscape, as if the smallest works are details of areas found in the medium-sized pieces, while the largest canvases are dramatic narratives encompassing broader purviews.

“6 a.m. — Looking Towards Spain,” for example, is a 32-by-28-inch acrylic-on-linen work with a very specific origin. Berbeco described the painting as “my view from the South Wellfleet, Mass., coast, looking east through a powerful summer storm.” Grays dominate the lower third of the composition, while a splash of red and a patch of golden yellow in the sky suggest a turbulent atmosphere. Her clouds as not necessarily representations of actual cumulonimbus puffs as much as they are passages of texture and hue that abstractly imply turbulence. Berbeco’s spare approach recalls that of Milton Avery.

“Flood” is a 50-by-34-inch acrylic portraying architectonic structures surrounded by sloshing blue-and-white waters. A childlike sun disk resides in the upper-left corner of the piece. Dense textures add to the choppiness of the scene, yet Berbeco’s sky is calm, with long brushstrokes pulled horizontally over the horizon.

While its title is a bit stark, “Corrupted Landscape,” a 48-by-40-inch mixed media on canvas, is one of the liveliest pieces in the show. A seemingly fast river runs through the vista, and a pine forest stands on the far bank. Patches of canvas are collaged and painted over in areas, thickening the atmosphere of the scene.

Several of Berbeco’s medium-size pieces have low horizons and are somewhat more literal than the larger works. “Marsh Edge” contains clouds receding into the picture plane over a landscape of scruffy greens and browns. “Marsh and Ocean” is a view from the water looking at a distant shore. A few whitecaps and a windy sky of cirrus clouds appear.

Of her smallest works, Berbeco wrote in her artist’s statement, “I try to squeeze as much energy into the smallest possible spaces.” “At Sea I” and “At Sea II” are quickly painted oils — their execution is practically slapdash. But their theme is chaotic water, so Berbeco’s method may be appropriate for her intent. “Dried River Bed” is a more complicated piece. The 5-by-5-inch hillside landscape has the brown colors of a winter without snow.

The cubist Georges Braque wrote, “Nature is a mere pretext for a decorative composition, plus sentiment. It suggests emotion, and I translate that emotion into art.” Berbeco appears to have a similar relationship to nature. Her works are not really trees, suns and waves. Instead, they’re reflections of emotions evoked by what the artist sees.