Seeking the Snakes of Vermont

This past winter wasn't particularly frigid, but it was cold enough to encourage many Vermonters to curl up and wait patiently for balmier days. The warm May sunlight has finally coaxed these hibernators out of their nooks to soak up the rays.

No, not sunbathers; we're talking about snakes.

Despite its long winters, Vermont is home to at least 11 snake species. They're widely distributed across the state, but their greatest concentration in terms of numbers and species diversity is along the southern edges of the Lake Champlain Basin. By feeding on small rodents and amphibians, and providing food for raptors and mammalian predators, snakes play a vital role in the state's ecosystem.

Wherever they slither, these reptiles are misunderstood. It doesn't help that, mythically, snakes have had a bad rap as symbols of deceit, death and the devil. Yet, with one exception — the seldom-seen timber rattlesnake — Vermont's snakes are harmless. If you can conquer your reptilian revulsion, searching for snakes is a fascinating way to spend a summer day. Just ask Jim Andrews.

Andrews, an adjunct assistant professor of herpetology at the University of Vermont, probably knows more about snakes than anyone else in the state. He conceded that the creatures can be a tough sell. "Snakes have a reputation in literature, in our psyche, that is down there with bats and wolves and coyotes," he said. "They need some PR."

And public-relations promo is just what Andrews gives them. In 1994, he developed a comprehensive website called the Vermont Reptile & Amphibian Atlas, an ever-evolving resource he still maintains. Many users know it as the "Vermont herp atlas" — that's short for herpetology, the study of reptiles and amphibians. For every resident turtle, lizard, snake, salamander, frog or toad, the herp atlas provides information on physical appearance, geographic range, conservation status and more. Citizen scientists have gathered much of the data.

The atlas is a valuable source for scientific researchers, but its secondary mission is to educate the public.

"Conservation is my goal," said Andrews over breakfast in Fair Haven, shortly before an early May snake-finding expedition. "Reptiles and amphibians are the vehicle."

Andrews continued with what might be called his mission statement: "Most people in Vermont enjoy interacting with wildlife. Many people came here or stayed here because they like being within a working ecosystem. And most of us, as parents and stewards, would like to keep that around for our kids and our grandkids, and future generations. But it is not gonna happen without awareness. Not. Gonna. Happen."

Why snakes, though? For one thing, there's that PR issue. Attitudes toward snakes are long overdue for a reboot. Also, many Vermonters don't even know their state is home to so many legless reptiles. "You can't assess the value of something if you're not even aware of it," Andrews said, "and you certainly won't know if it disappeared from your house, or from your town, or from your state, if somebody wasn't aware of it."

The atlas isn't his only means of broadening that awareness. Andrews regularly leads excursions into prime snake territory, with two goals: to dispel long-held misconceptions and to emphasize the animals' place in any conservation plan. For years, he has taken employees from various state agencies on field trips to demonstrate how snakes can and should fit into their missions. The "snaking" trip on which Andrews invited Seven Days was for the benefit of the Vermont Agency of Transportation.

Snakes and traffic patterns may not seem related, but Andrews explained the critical role that VTrans can play in reptile conservation. Some 15 years ago, Chris Slesar, who works in VTrans' environmental division, approached Andrews, realizing that transportation systems and the wildlife movement needed to interact. Specifically, officials needed to take wildlife migration into account as they designed and built Vermont's transportation infrastructure.

Their collaboration has yielded concrete results. Andrews cited several VTrans projects built with wildlife conservation in mind: a foraging and egg-laying habitat for a species of snakes called racers adjacent to a stretch of Interstate 91, for example; and a causeway between Swanton and Alburgh that creates habitat for spiny softshell turtles.

When Seven Days met up with Andrews, Slesar and nearly 20 other VTrans employees, the goal was more straightforward: to find, observe and learn about snakes. That's the first step, Andrews believes, toward achieving compassion for the creatures, and toward considering their needs when designing future projects.

We convened at the Helen W. Buckner Preserve, a 4,000-acre site along the Poultney River in west-central Vermont. The preserve is one of the most ecologically diverse areas in the state, and it's particularly rich in snakes: 10 species are known to dwell there. (Only racers live elsewhere, chiefly in Vermont's southeastern corner, which is also thought to be home to the eastern hognose snake.) The method was simple: Spread out, walk across the preserve's meadows and try to startle the snakes into showing themselves.

Just a minute into our search, and no more than 100 feet from the road, Jens Hilke, a conservation planning biologist with the Vermont Fish & Wildlife Department, pounced on the ground and came up with a garter snake. Andrews seized the teaching moment, demonstrating how to hold a snake and identify its gender from its markings. This one, a female, had eaten recently, judging by the palpable bulge in her middle.

Very soon a second snake was found — a big black one half-buried beneath a dried shrub. It took a moment for even Andrews to realize that this animal, a four-foot-long eastern rat snake, had already shuffled off the mortal coil. That made it easier for him to push gently on the snake to express its hemipenes — the twin barbed male sex organs. Andrews passed the lifeless animal around, and much of the group's squeamishness dissipated. Once you've touched the spiky half-penises of a dead snake, there isn't much else to feel queasy about.

Even novices were soon leaping to capture the many snakes that slipped through the meadow's tangled mat of dead grass. A surefire method to catch a snake is to pin it gently to the ground with one hand, then pick it up and allow it to coil around your hand and arm. Usually, the snake settles down within seconds.

How do you know whether it's safe? Easy: If the snake rattles, leave it alone; if it doesn't, you can touch it. 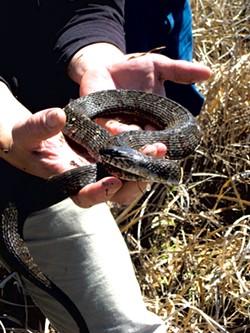 That rule has some exceptions. The banded common milk snake will rattle and strike, but it's nonvenomous. True rattlers are rare — and endangered — in Vermont; you can recognize them by the segmented rattle at the end of their black tails.

This reporter, who had no unease about handling snakes, paid the price for his bravado. Garter snakes, it turns out, can bite. The attack felt no worse than a scratch from a rosebush, but it was nonetheless startling to see a snake's teeth embedded in my wrist.

In a garter snake, those teeth are only a millimeter or so long, Andrews said, and they're meant for holding prey in place, not for injecting venom. Just as he promised, the small wound healed quickly.

The occasional shallow chomp aside, Vermont snakes are far less dangerous than many of the other animals — and even some of the plants — that we regard as cute or ornamental. Less dangerous than chipmunks, even. "What vertebrate can you go out there and grab?" Andrews asked rhetorically. "Skunk? Raccoon? Wildcat? Go grab 'em — something's going to happen.

"People plant plants in their yards — rosebushes, blackberries — that are more dangerous and do more harm to humans than these snakes do," he insisted.

The remainder of the morning yielded a great many more garter snakes, along with two other species: a tiny DeKay's brown snake, found on a dirt road; and several northern water snakes. We located young water snakes in a froggy pond and a big, gorgeous, gray adult water snake poking through a reedy marsh. Even passed from hand to hand, this three-and-a-half-foot snake remained docile.

After this excursion, the members of our group would surely swear that scanning for snakes in a sunny field is a fun and educational pastime. Just don't tread on them.

The original print version of this article was headlined "Snake, Rattle and Roll"