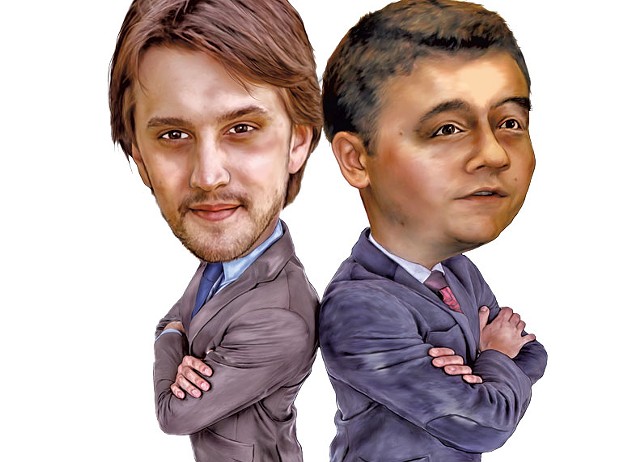 Jim Fitzgerald was a conservative "blue dog" Democrat when he served two terms — divided by decades — in the state legislature representing St. Albans.

Today, six campaign signs are planted on the lawn of his Rail City home: five for Republican candidates, one for a Democrat.

"I'm still a Democrat in theory," said the 77-year-old former mayor of St. Albans who worked for years as assistant general manager for the Central Vermont Railway. "I never left the Democratic Party. They left me."

Fitzgerald is not alone in Franklin County. Once teeming with Catholic Democrats, county voters now send 10 Republicans, one independent and just two Democrats to Montpelier to represent them in the Statehouse. A decade ago, the Franklin delegation numbered seven Democrats and six Republicans.

As the rest of Vermont moves ever leftward politically, this northwest corner of the state has become the rare place where Republicans have gained ground. If the party is to maintain any leverage in the Statehouse — where they hold just nine seats in the 30-member Senate and 53 of 150 seats in the House — they have to keep winning in Franklin County.

But holding onto those gains won't be easy for the GOP in 2016.

Both the Democratic and Republican parties are working hard for wins in November. Both parties have field offices in downtown St. Albans. In each case, a field director and volunteers are blitzing the county with phone calls and in-person visits.

"In 2014, a lot of our wins were in Franklin County," said Jeff Bartley, executive director of the Vermont Republican Party. The party picked up two seats in the House and one in the Senate that November. This year, Republicans are doing more groundwork to target likely supporters there, he said.

Natalie Silver, the Vermont Democratic Party regional field director for Chittenden, Franklin and Grand Isle counties, said her party is doing the same. In fact, judging from the size of their ground game, Democrats have the edge. "Our field operation in Franklin County and statewide is the biggest field operation Vermont has ever had," she said.

Republican Bartley conceded, "They have 20 staffers. We have four."

In Fitzgerald's St. Albans, one of the two House seats representing the city and a portion of the adjacent town has ping-ponged back and forth between a Democrat and Republican in 2010, 2012 and 2014.

This year, Democrat Mike McCarthy hopes to continue that tradition by ousting Republican Corey Parent, to whom he lost the seat in 2014.

Parent, 26, and McCarthy, 32, are both political junkies who recently purchased homes in the county where they grew up. Within their respective parties, the young men are considered rising stars.

Each characterizes himself as on the centrist side of his party.

If this were 50 years ago, Parent said, he'd likely be a Democrat. "I definitely consider myself in the mold of a Truman-Kennedy Democrat," he said. But in 2016 Vermont politics, he argued, Democrats have gone too far left, so he's a pro-choice, fiscally conservative Republican.

"I never left the Democratic Party. They left me." Jim Fitzgerald tweet this

McCarthy, meanwhile, conceded that many Franklin County Democrats think the party statewide has chased too many liberal causes, including mandatory paid sick leave and universal health care. McCarthy argued he can bridge the gap between the old-time conservative Democrats and the younger, more liberal version. He supports paid sick leave, for example, but sought compromise to ease the burden on businesses.

Parent and McCarthy are competing in a two-seat district, where Rep. Kathy Keenan (D-St. Albans) has held the other seat since 1989 and is seeking reelection. Republican Claude Bouchard, a frequent candidate, is also running.

Although more Democrats are likely to turn out in November — to vote in the presidential election — than they did in 2014, the results may clarify just how much politics have changed in Franklin County.

The region itself has been growing steadily. Between 2010 and 2015, a period when Vermont's overall population remained stagnant, its population increased 2.2 percent to 48,794. Much of that is attributable to workers in neighboring Chittenden County searching for affordable housing. Real estate is cheaper in Franklin County, but incomes are lower. The area is seen as the poor cousin of Chittenden County, which has a population of 161,382.

Fears of a flat economy have had a conservatizing effect on many Franklin County Democrats, according to Fitzgerald. He's irritated at a legislature that spends its time debating marijuana legalization instead of focusing on fiscal issues. Many local residents still grumble that the permitting process for the St. Albans Walmart took too long. The megastore opened in 2013.

"The progressive movement in Burlington doesn't sit well up here," he said, referring to liberal lefties as being "in la-la land."

Social issues have also nudged Franklin County rightward, according to Frank Cioffi, a former economic development commissioner under Democratic governor Howard Dean. When the Vermont legislature voted in 2000 to enact civil unions — the precursor to same-sex marriage — many of his neighbors in St. Albans rebelled to a level that surprised him.

They got comfortable voting for Jim Douglas, Cioffi recalled, noting that the Middlebury-educated Republican governor had an encyclopedic memory and was great at remembering names. Those voters still call themselves Democrats, he added.

In this year's election, Fitzgerald said he plans to vote for Republican candidates for governor, lieutenant governor and two state Senate seats. In the House, he'll split his ticket and choose Republican Parent and Democrat Keenan.

For president, he said, "I honestly don't know."

Anne Howrigan is in a similar boat. The 84-year-old matriarch of a large clan of Howrigan dairy farmers in nearby Fairfield noted that voting Democratic in Franklin County was almost a reflex at one time.

"I don't think that holds true now," she said. "I'm a Democrat, but I'm kind of disappointed in the way things have gone in Montpelier. It seems the pie's the sky in Montpelier. They over-estimate the growth of the economy."

But she's not gone all GOP. Connor, the Democratic House member in Fairfield who faces opposition from Dubie's wife, is Howrigan's nephew. "I think he does a good job," she said.

Cioffi said he grew up a solid Democrat, recalling former Democratic governors Phil Hoff and Tom Salmon and U.S. Sen. Patrick Leahy (D-Vt.) visited his parents when he was growing up in St. Albans. Although he still considers himself a Democrat, he hosted the reception for Scott, whom he described as a longtime friend.

Similarly, John and Trudy Cioffi had never hosted a political sign on their property — until they planted two: one for Parent, one for Degree.

"We're not very big political people," insisted Trudy, who is a mother of three. But John, who is Frank Cioffi's cousin, was Parent's seventh-grade teacher and Degree's hockey coach. "We watched them grow up," Trudy Cioffi said.

Both schoolteachers, the Cioffis don't align entirely with Parent and Degree. Trudy was more amenable to raising the minimum wage, for example. Degree and Parent said they worry that a mandated increase could lead to layoffs.

But John and Trudy Cioffi see Parent and Degree as lawmakers they can talk to, who will explain their votes and are involved in the community. That sort of personal connection is key in any legislative district, but in St. Albans and Franklin County, it appears to hold more weight than party affiliation.

Family history, too, goes a long way to earning the trust of voters, according to Kittell of the populous Branon farming clan in Fairfield. Kittell served 17 years in the state Senate before declining to seek reelection in 2012. After losing a bid to return in 2014, she is trying again this year.

Kittell is one of nine children and comes from the family that produced E. Frank Branon, her grandfather, who served in the House and Senate and ran for governor twice. Three hundred members of the Branon clan gathered in Franklin County last summer for a family reunion.

That network of relations protected Kittell at politically vulnerable moments. When she voted for civil unions in 2000, many asked how she would manage to win reelection among Franklin County Catholics, she recalled. She won because "people knew me. We disagree on things, but it goes deeper than one issue."

Kittell conceded that the Republican message — that Vermont has become an unaffordable place to live — is resonating among voters this year. But she hopes to persuade them that Democrats have better solutions to the problem.

So does McCarthy in his run to regain the House seat. Republican promises to reduce spending come without specifics, he argued. "They'll never make good on the promise that your property taxes are going to go away, even if they had a majority," he said.

That rings true for Katy Collin, a 49-year-old Franklin County native who owns a shop called What a Yarn and Antiques on Main Street in St. Albans. Though she expressed concern about the number of people on social services, she said McCarthy and Smith, the Democratic Senate candidate, are trusted friends.

Swanton native McCarthy ran Cosmic Bakery in St. Albans for six years and now sells solar panels for SunCommon. He attributed his 2014 loss after one term in the House to frustration with Shumlin and low voter turnout.

The Republican shift in Franklin County was temporary, he contended.

Jeff Young, a Democratic House member who was ousted from the same seat in 2010, agreed. "I don't see Republicans making any gains," he said. "I'd be surprised if they hold onto even part of the seats they gained last election."

Parent offered a different assessment, but he isn't taking any chances. The insurance adviser who once skipped school in seventh grade to meet Douglas said he has knocked on every door in his House district once and has started on round two. "It's red," he said.