For 30 years, Gordon Clements has manufactured and sold window shades, curtains and blinds out of a Williston business he founded in his basement: Gordon's Window Décor. Three years ago, he came out of retirement to develop a new window treatment unlike any he'd made before. When asked why, he chokes up before answering.

A decade ago, Clements' close friend was killed in a school shooting. (He won't identify the victim or the school, at the request of her family.) A mental image of his friend trying to hide as the gunman roamed from classroom to classroom seared itself in his mind.

"That's always haunted me. It's something I just couldn't let go," Clements says. "Finally, I felt like I had to do something about this [problem of school shootings], rather than just being upset about it."

After consulting extensively with school architects, public safety experts, local law enforcement and educators, Clements, 70, returned to his former occupation and devised a plan. Since then, he's devoted much of his free time, and a sizable portion of his retirement savings, to building a system that helps protect schools from an active shooter. The result: SecurShade, a patented window covering that automatically shields students and staff from view with the touch of a button.

During a school lockdown or "clear the halls" scenario, security protocols typically direct staff to lock the doors, turn off the lights, close the shades, seek cover and stay away from windows. With SecurShade, one teacher or office worker can hit a remote control and instantly drop all the shades in the building simultaneously. Others no longer need to do the job manually, potentially putting themselves in harm's way. The shades are made of specially designed fabric that lets people in the building see out but blocks outsiders from seeing in. They're part of an electronic system that automatically alerts police to an intruder in the building and can even pinpoint that intruder's location, based on which remotes are deployed when.

Since testing wrapped up several months ago, SecurShade has garnered endorsements from local police and current and former school administrators. "I thought it was a great idea," says Armando Vilaseca, the former Vermont secretary of education, who now advises Clements. He says SecurShade adds "one more level of peace of mind" that districts are doing all they can to mitigate risk to students and staff.

Mike Schirling, the former Burlington police chief who spent nearly 30 years in law enforcement, calls SecurShade "a pretty compelling product ... It's simple, intuitive to use and could really have an impact."

Public anxieties about school gun violence remain high in Vermont, which hasn't been immune to such tragedies. August 24 marked the 10-year anniversary of the Essex Elementary School shooting, which claimed the lives of two people and injured three others.

In the post-Columbine era, active-shooter incidents at schools and on college campuses have come to feel like everyday occurrences. Everytown for Gun Safety, a pro-gun-control group, reports that at least 197 school shootings have taken place since 2013 — an average of nearly one per week. At least 10 have occurred so far in 2016, including one in Townville, S.C. — on the day after Seven Days spoke with Clements — that left two people dead and two injured.

Technological defenses against gun violence have obvious appeal, but how feasible are they at a time when school budgets everywhere are tight? Clements can't say exactly how much SecurShades will cost once they're in mass production but says he doesn't expect the price to exceed that of conventional shades by much, especially if a school was already planning to replace them.

"When I tell [administrators] that this is going to cost an additional 50 bucks a window, they say, 'That's not even worth talking about,'" says Clements, who's already fielded interest in SecurShade from districts as far away as San Diego. "Some of these schools are spending $50,000 just to control bullying on social media."

Still, how many schools will invest in a new security measure addressing one specific threat that, even SecurShade's supporters admit, is highly unlikely to occur?

Robert Evans is manager of organizational assessment and K-12 services at Margolis Healy, a Burlington consulting firm that specializes in campus safety and school security. Evans, who spent 23 years with the Vermont State Police, is now contracted with the Vermont Agency of Education and the Department of Public Safety to help schools improve their emergency preparedness. He assists them in developing state-mandated emergency-response plans, conducting threat assessments and training exercises and choosing new security devices.

Evans says it would be inappropriate for him to comment directly on SecurShade or any other product. Speaking generally, however, he calls active shooters "high-impact, low-probability events." In other words, the public is acutely aware of school shootings and justifiably concerned about them, in part because those tragedies always make the news. Still, Evans notes, that emotional response alone shouldn't drive schools' security purchases.

"The decision to deploy any countermeasure technology should be combined with a comprehensive risk assessment," he says. That means the probability of a shooting occurring in any given school should be weighed against other threats, such as severe weather, school bus accidents and parental interference in child-custody disputes.

Evans always advises school administrators to determine which new measures will give them the biggest bang for their buck, he says. Often that means starting with the basics, such as implementing a new visitor-management system or traffic-calming measures in the school parking lot. Another priority is investing in two-way radios and outdoor PA systems that can alert students on playgrounds and ball fields to potential threats. Sometimes, Evans adds, just adopting new policies and procedures goes a long way toward improving overall school safety at little or no cost. 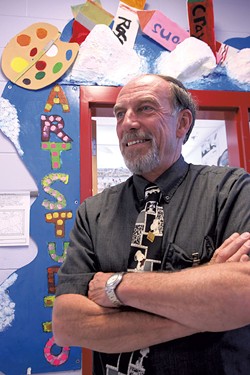 SecurShade is only the latest product to hit the market in a burgeoning school safety industry that's grown from $768 million in sales in 2014 to an estimated $907 million this year. As Sasha Abramsky notes in his August 9 story in the Nation, "The School-Security Industry Is Cashing In Big on Public Fears of Mass Shootings," some of these new products have real value, while others are questionable.

Consider the $1,420 Bodyguard Blanket, which hit the market after the Sandy Hook shootings of 2012 and the deadly tornado that killed seven schoolchildren in Moore, Okla., in 2013. The Kevlar-like coverall is supposed to shield children from everything from gunfire to storm debris. But critics point out that it only protects one side of the user's body — and wouldn't have helped the students killed in that tornado, most of whom suffocated or drowned when the school building collapsed.

Other technological fixes meant to make schools safer may actually do more harm that good. Following the Sandy Hook massacre, several companies began selling classroom barricade devices meant to prevent an intruder from forcing open a classroom door. Critics contend, however, that such devices may violate state fire codes and pose an unacceptable risk to children and those with disabilities.

In short, Abramsky concludes in his report, school shootings can spur communities to action even as they neglect to consider statistically more probable threats. "By several orders of magnitude, far more kids die each year in car crashes or drowning accidents — or from asthma," he writes. "And far more young lives are lost to a host of other diseases closely correlated with poverty." Even in the deadliest years for gun violence, the odds of a child or adult being shot at school are one in a million.

To many people, however, one-in-a-million odds are still too high, especially when you're talking about children. And, SecurShade supporters note, the device offers other benefits. Schirling points out that the shades' translucent fabric allows natural light to filter into classrooms without excessively heating them. During the recent spate of "scary clown" incidents, he adds, being able to deploy shades at the touch of a button could have minimized the impact of such external disruptions.

At Allen Brook, currently the only school in the country where SecurShades are being deployed — they're in two classrooms and not yet connected to emergency services — principal John Terko says the product has been well received by students and staff.

"When you lock a building down, you want everything to be invisible," says Terko, who has 350 students and a staff of more than 60 to protect. "At least it buys you time, and that's what you want — time to get your kids or employees out of harm's way. As you know, every second counts."