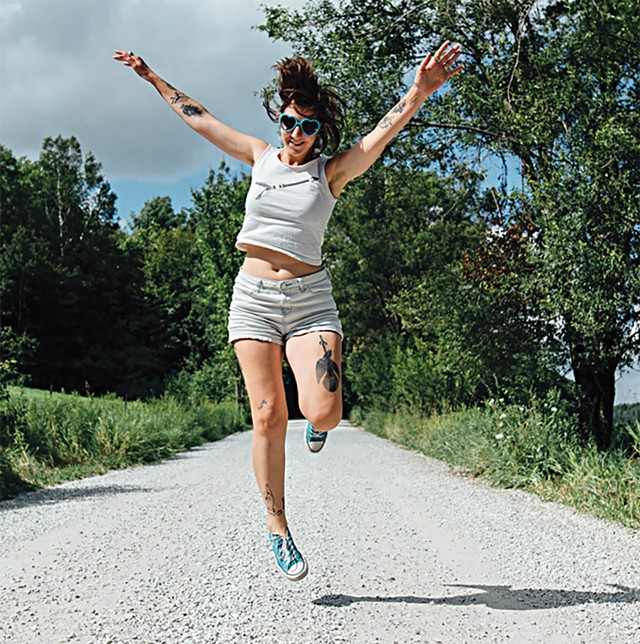 Arielle Thomas has slept under bridges, worked on the bungee trampoline ride for a traveling Renaissance festival, and lived with "a grave robber and a kid named Squirrel." But perhaps her most epic adventure yet was the 52-day road trip that ended with her "accidentally" moving to Vermont.

Thomas grew up mostly in the quiet hills of Greensboro but left Vermont in her late teens. By her mid-twenties, she was working as a real estate photographer in Chicago. In the summer of 2016, during a period of transition, she drove her 2000 Mercedes-Benz E320 from East Coast to West and back again. Sometime after getting a flat tire in Ballarat, Calif. — a ghost town once famously inhabited by cult leader Charles Manson — she had a wake-up call. "I like the nomadic life," she says, but "I realized I was gonna become one of those crazy camper travel weirdos."

And so, when she found herself in Vermont on a peak summer weekend, she decided to put down roots — at least for now. But she still hits the road whenever she can, camera in hand. As she puts it, "We have a beautiful state to ride around."

How to get off the beaten track:

I go somewhere. I find every dirt road I can. Every turn, I just go up the hill, always trying to find the view. Sometimes it doesn't work. That's what I do when I have a day off and enough gas in the tank. You really have to commit to the whole day.

Miku Daza. They're my favorite local band. They're super fun to dance to. Miku — she's the singer — is one of the most incredible people I've ever met. I told her when she gets famous she has to make me her personal photographer. 'Cause she's gonna get famous.

Nichols Ledge in Woodbury. You have to go down this really sketchy road to get there. It's this ledge, and you're really high up. That's the most bomb spot for selfies. You're literally on this cliff. It's so beautiful. It's so weird and cool and terrifying. The water is so blue.

Nichols Pond is my favorite place to go swimming. It's a little bit easier to get to. It's super deep. You can't wade in; you just have to get in.

The Northeast Kingdom is stunning everywhere you go. I was amazed at how much I had missed nature after living in cities. I feel like so many people in Burlington have no idea about the Northeast Kingdom. I'll be like, "I'm from the Kingdom," and they're like, "What's that?"

I love to bring people to Lake Willoughby. I think about it all the time, about going to get sunrise photos at Willoughby. It's a really nice place. There's also a secret nude beach there. And Parker Pie in West Glover is the best pizza in the whole goddamn state.