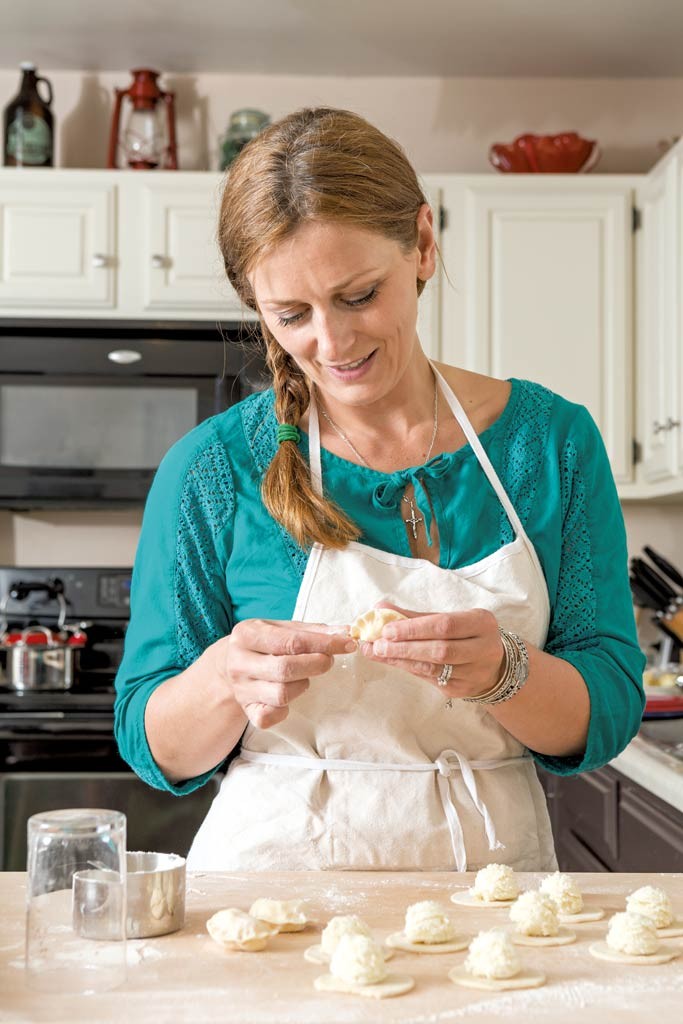 The seven chickens in Luiza Bloomberg's well-kept backyard cluck and curdle, looking suspiciously at her as she ducks into their hay-lined house. The petite blonde, casual in jeans but glammed up in liquid eyeliner, quickly emerges with seven eggs in various shades of tan and Tiffany blue.

Bloomberg may live just blocks from downtown Shelburne, but the chickens aren't the only trace of her upbringing in the Polish countryside. She makes jams from her cherry and peach trees and grows potatoes in an oversize trashcan. Twenty more chickens, intended for meat, arrived last week. Homegrown beets and the riches of a new currant bush feed Bloomberg's family — and now, through her business Luiza's Homemade With Love, an extended family of customers.

Last December, Bloomberg began selling pierogi that she makes by hand exactly as her grandmother did in Poland. Since then, her tiny business has expanded to include many more native dishes requested by her growing following. Her intensely beet-flavored barszcz (borscht) can be served dotted with uszka — tiny, ear-shaped mushroom dumplings. Kapusta z grochem, a stew of sauerkraut with white beans and millet, may sound simple, but its slow cooking brings out flavors so rich, it's hard to believe there's no cream in the peppercorn-speckled dish.

The one unifying factor of Bloomberg's creations is a surprising one, especially in a culinary tradition where lard dotted with bacon often appears in place of butter at the dinner table: All her dishes are vegetarian. That's for reasons of pragmatism rather than principle: Bloomberg (née Sienko) hasn't bothered to upgrade her home kitchen license to get certified for meat handling. She's doing just fine making cheese, potato-and-cheese and sweet-cabbage pierogi — hold the meat.

On a recent Wednesday, Bloomberg mixes a few cups from her economy-size King Arthur Flour bag with lukewarm water and cracks a single egg from her flock. She does this all by feel, not by measurement. "Anything can affect the dough," she says. "If it's rainy, if it's sunny, it's different."

Bloomberg rolls out the dough by hand, leaving it just thick enough so it doesn't break when filled and cooked. She uses a melon baller to scoop just the right amount of filling to match the circles of dough she cuts out using a small glass. Effortlessly, she stretches the dough around the filling, leaving thin, crimped edges that make each little pocket resemble a half-sun and its rays.

When these are cooked in just a bit of butter, the result is an exceptionally light dumpling, miles away from the store-bought pierogi most Americans were raised on. It's a lush bite, especially when stuffed with molten farmer's cheese. The cabbage is deceptively meaty tasting. Bloomberg's most popular pierogi, the potato and cheese, is fluffy inside, almost like a soufflé. 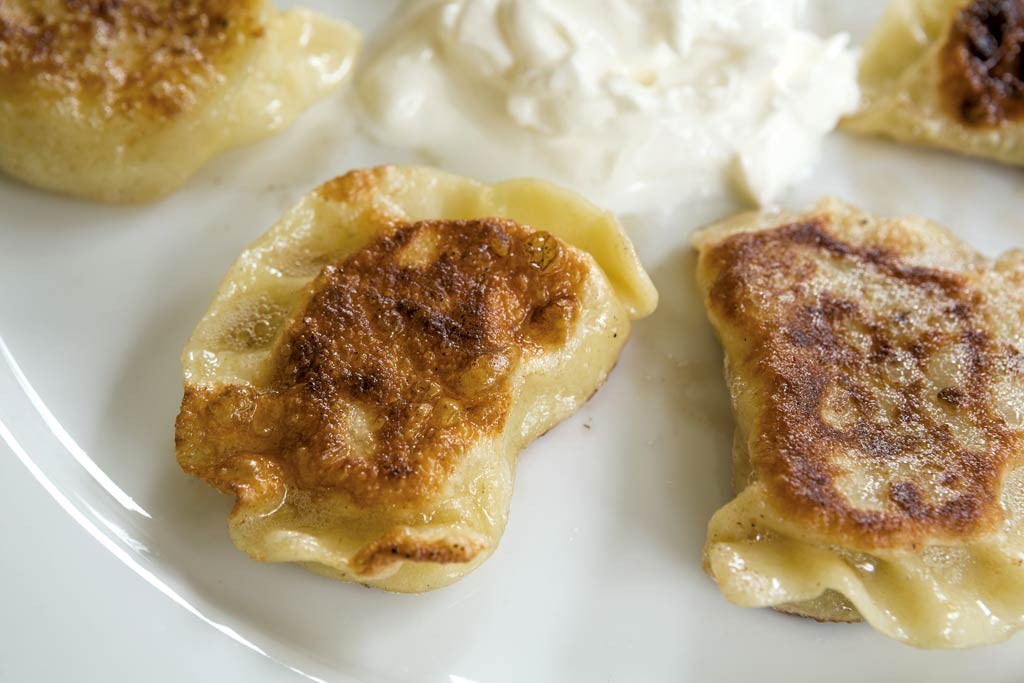 There may be a surprising air of sophistication about them, but these thin-skinned specialties aren't just impressing grown-ups. Bloomberg says one customer attributed her increasingly regular orders to her young daughter. When Bloomberg's customer made the mistake of buying supermarket pierogi, the little girl was scandalized. "She told me she said, 'Mommy, why would you buy Mrs. T's [Pierogies]? I can't have those anymore! Just get Luiza's,'" Bloomberg recounts.

The cook's own children were the inspiration for her business. When Jacob, Ania and Maksym — now 8, 6 and 4 — were born, Bloomberg quit her job as a forensic psychologist for the Vermont Department of Corrections to be home with them.

Raised along the Polish-Ukrainian border, Bloomberg immigrated to a heavily Polish neighborhood in New York in 1988. The now-40-year-old recalls being startled by the behavior of fellow students at her Brooklyn public school: "There were a lot of criminal activities, and I was like, 'I don't even speak English, and I know you shouldn't be doing that,'" she recalls, holding her hands to her face in mock horror.

Ski trips with her family fostered a love of the Green Mountains. Bloomberg began her psychology career at the Vermont State Hospital in Waterbury before moving to the Department of Corrections. What was the appeal of working with the criminally insane? "Psychopaths and criminal behavior and mental illness is so fascinating," she says with a wistful smile. "At work it's never a dull moment."

Now Bloomberg is happy to stay home with the support of her husband, Josh Bloomberg, a Shelburne native. When asked if she misses her old lifestyle, she answers with certainty: "Actually, no. I just want to cook. I really enjoy it. My dream would be to have a little 10-table restaurant making my own kielbasa and stuff like that," she says.

For now, Bloomberg is aiming to grow her business by word of mouth. She has no website and is still working on launching a Facebook page. Most of her orders arrive via text message, email or phone.

And there are enough of those orders that Bloomberg finds herself making large batches of pierogi several days a week, which she sells for $7 or $8 a dozen. Her own kids demand them as vociferously as her customers, she says. Her two elder children enjoy pierogi served with ranch dressing for dipping, while Maksym, the youngest, demands fruity Polish ketchup.

Bloomberg also supplies frozen dumplings (including the uszka) to A Taste of Europe in South Burlington. Her next order of business is to reach out to a few other stores and restaurants, such as Healthy Living and ¡Duino! (Duende). By fall or winter, she hopes to sell her wares at a farmers market or two.

One innovation is fast approaching with the warm weather. As fresh, local fruits ripen, dessert pierogi will soon appear on Bloomberg's concise roster of offerings. "I can't wait to make the blueberry ones," she says. She looks forward to experimenting with pie-style fillings, including strawberry-rhubarb and her homegrown currants. She may also make paczki, or round Polish doughnuts, and fill them with homemade jams from her own fruit trees.

Bloomberg family favorites may soon appear on the menu at Luiza's Homemade with Love — for instance, a drink she makes called kompot. The simple fruit juice is little more than dried apples stewed in water. "My kids love it," she says. "They call it 'Mama Juice.'"

On busy nights, the Bloomberg family likes nothing more than freshly cooked noodles mixed with farmer's cheese and butter. Bloomberg calls it "Polish mac and cheese."

Other favorite dishes incorporate meat, so they won't appear at Luiza's unless Bloomberg gets her kitchen recertified. For instance, there's her urek, a soup that gains its smoky flavor from kielbasa Bloomberg purchases in New Jersey, where her extended family now lives. Its base is soured rye flour. Slices of the family chickens' hard-boiled eggs bob in the salty, milky broth along with half-moons of kielbasa. The tangy flavor is seductive.

Bloomberg's barszcz shares that appealing zip, but since it's vegetarian, customers can enjoy it today. The secret of its flavor is a starter similar to a sourdough culture. She ferments the mixture with spices and garlic under a pile of rye bread, for a result that could never be confused with typical Russian borscht. And customers can't get enough.

"I have some customers that order on a weekly basis," Bloomberg says. "There's one lady who is on my calendar every other week or every two weeks, she's like, 'Surprise me.' And she gets back different foods" with each order.

While many of Bloomberg's customers are from Poland or of Polish descent, she says she realizes that her culinary traditions can pose challenges to Americans unfamiliar with them. When potential customers have doubts, she offers a sample. "I'll say, 'How about I bring you, like, four [pierogi] — just try it?'" she says. "Sometimes it's good to try it out."

Has anyone sampled Bloomberg's fare without demanding more? "No, they haven't," she says with a giggle.

The original print version of this article was headlined "Dumpling Diva"