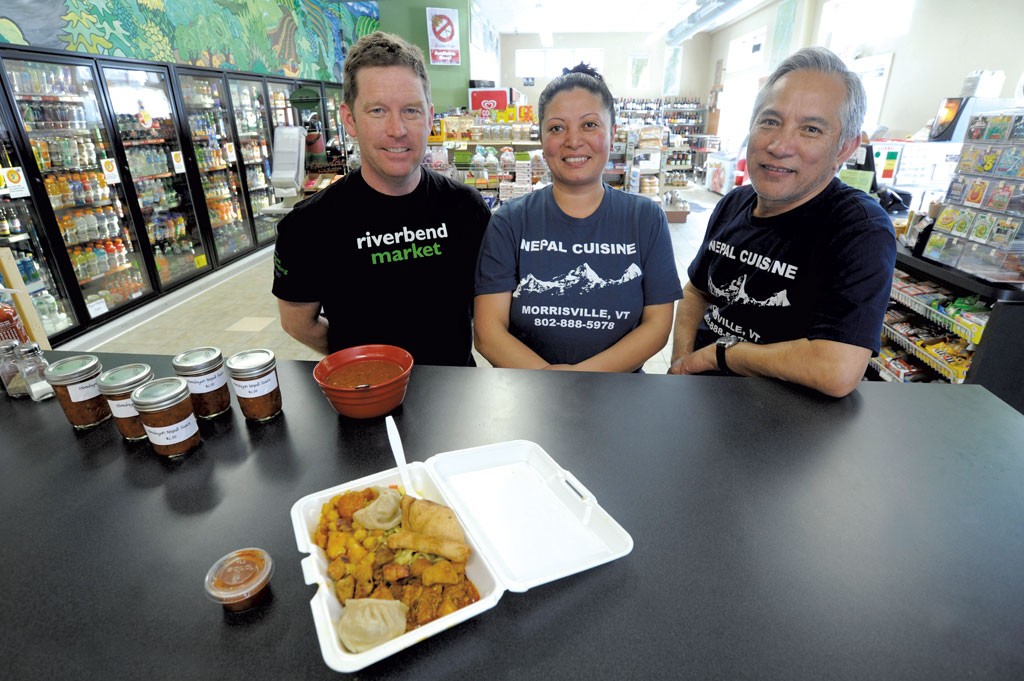 Raymond Dewan doesn't remember ever serving a fellow Nepali at his Morrisville take-out restaurant, Nepali Cuisine. "Our customers are all locals," he says.

What about the sizable enclave of his countrymen in Burlington? Dewan suspects they're happy to stay at home and cook — and, in any case, his cuisine wouldn't give them a taste of home. Most of those ethnic Nepalis are from Bhutan, Dewan points out, and grew up eating very different food than he did in Darjeeling on the Nepal-India border. Even more distinct is the cuisine of his Newari wife, Laxmi, whose people are indigenous to Kathmandu but account for only 5 percent of the Nepali population.

More importantly, to the Morrisville community that flocks to the Riverbend Market for lunch, the Dewans' robustly spiced curries have become anything but foreign.

Since the couple opened their food counter in March 2014, John Goodhue of Vermont Green Printing and his colleagues have eaten Himalayan food three or four times a week. "In our opinion, it's the best lunch in Morrisville," he said. "We always joke that we're going to have lunch at the gas station."

That's correct: a gas station. Tim Monaghan opened Riverbend Market in January 2014, but it had a long past as Bourne Food Mart, a more conventional gas-station grocery dating back to 1965. Monaghan came to Morrisville from his native Massachusetts, where he began working for the Bourne family in 1987. In 2006, he settled in Vermont, where he ran both the market and the nearby Bourne's Service Center.

When he reopened the store as Riverbend, Monaghan aimed to slim down the stock of junk food in favor of healthier local and gluten-free products. KIS Kombucha, brewed nearby, shares cooler space with yerba maté and apple cider vinegar drinks. Stub's Old Fashioned Pickles, made in Eden, are shelved above the protein bars, just across the aisle from maple cotton candy and several flavors of Vermont Peanut Butter.

At the start of 2014, Monaghan had an empty vendor space at one end of his market, but he didn't want to fill it with a gas-station deli that served pizza and grinders. One friend mentioned a favorite farmers market vendor looking for a place to sell wares year-round — the Dewans. Within a week, they had an agreement with Monaghan. After a brief kitchen renovation, the couple began serving their small menu at Riverbend Monday through Friday.

Nepali Cuisine still maintains that schedule, leaving room in the summer for the Dewans' farmers market commitments in Hardwick, Craftsbury, Morrisville and Johnson. "If I don't do the farmers market, they'll kill me!" Raymond says of their steady customers. Those customers' support made the business a success.

Raymond first came to the United States in 1979 to study business administration, but he soon returned to Nepal, where he ran a small leather business until 2007. A Vermonter who rented one of Raymond's Kathmandu apartments introduced him to the Morrisville area. When Raymond and Laxmi decided to raise their children, now 12 and 6, in the U.S., the placid mountains seemed like the right setting.

"I love it. It's nice and quiet," Raymond says now. In comparison, he said, Kathmandu is noisy and full of pollution, with frequent water shortages.

He had no regrets about leaving his home for a maintenance job at Topnotch Resort & Spa in Stowe. Sending the kids to Morrisville public schools helped the family forge connections to the community. But it was Raymond's outgoing personality that led to the unexpected creation of Nepali Cuisine.

While shopping at the Morrisville Farmers Artisan Market in 2010, Raymond noticed that more people were coming to eat than to bring home veggies. "You need more varieties of food," he remembers telling the market's manager. "You need to spice it up." Soon after, he took matters into his own hands, bringing a small pot of curry to the market. The first week, he only made $35.

After Raymond gave out freebies for a few weeks, business began to boom. "We went from just a small pot to big, big, big, big!" Raymond recalls. Little by little, the business grew to provide nearly full-time work for Raymond and Laxmi. The only problem was that few farmers markets in the area operate year-round. Renting out the Riverbend space created a steadier revenue stream that allowed Raymond to quit his maintenance job at Lamoille Union High School.

Now he spends his days making the chicken and vegetable curries that, he said, account for about 80 percent of the Dewans' business. The stews are no more shy than their chef is. Using Nepali chile powder trucked up from New York City, Raymond creates a rich burn in the deep red-orange sauce.

Unlike Indian chefs, who toast their curry spices initially to let them bloom, he waits to add aromatic blends such as garam masala and curry powder until the end of the cooking process. Thus, while the two types of curry share most of their ingredients, the flavor profile of Raymond's oily curry inverts the Indian one, bearing little resemblance to the latter beyond an uppercut of heat.

The $7 curries, filled with small cubes of chicken or a mix of vegetables such as cauliflower and chickpeas, come with a side of rice or noodles made by Laxmi. The slippery lo-mein style noodles, complete with skinny slices of carrot and cabbage, aren't so different from the Chinese dish. But the rice gets its vivid yellow from turmeric. Cardamom, butter and tiny cubes of carrot make it a fragrant base for the curries.

Laxmi also fries up Indian-style samosas. They're not part of her heritage, but customers request them, Raymond explains. Though Laxmi's English is clear and peppered with humor, she lets her more fluent husband do most of the talking. Perhaps it leaves her more time to make her exceptional momos.

The beef dumplings are something of a marital compromise. Laxmi's native momos are round, as is common in Tibet and much of Nepal. But in Darjeeling, Raymond grew accustomed to the thick skins being folded in the more oblate shape of Chinese jiaozi. The puffy dumplings that the couple's customers gobble up are the shape he grew up with, with her filling recipe.

Those dense beef balls are just slightly pink in the middle. Flavored with ginger and onion, they have plenty of personality on their own. But it would be a mistake not to dip them with gusto into the couple's hot sauce.

The fresh tomato-and-chile-based concoction has more in common with Mexican salsa fresca than with the spicy chutneys usually associated with the Dewans' part of the world. In winter, the sauce is bright with cilantro — but only because Raymond is dissatisfied with the mint available in Vermont at that season. "Mint is the best; it tastes much better," he says. As soon as local farmers begin harvesting the herb, it replaces cilantro for a more authentic eastern Nepali flavor.

The couple sells the sauce in $5 canning jars, which they struggle to keep in stock. "Whenever he has extra, they sell [it]," Monaghan says. "There are some other businesspeople around who have said, 'Let's get together and distribute this.'"

But the Dewans don't have time to add packaging sauces to their current duties. Their menu includes just five items — except on Fridays, when Laxmi prepares her Newar people's native barbecue, known as choila. Her grilled chicken is covered in a piquant sauce of fenugreek, ginger, garlic and green chiles.

In a town where the only other ethnic cuisine is Americanized Chinese, Laxmi's barbecue has created a small sensation. Teachers at the middle school order plates every Friday. "It's just painstaking what she does," says Goodhue, who also regularly orders the choila.

Though Nepali Cuisine has a steady stream of customers from 11 a.m. to 7 p.m., the Dewans have no plans to expand beyond their tiny gas-station kitchen. "Some people complain that it's in a gas station; they don't like coming here. But we're looking at it cost-wise," Raymond says. "If you rent a separate place, the price of the food will go up. We want to keep it as low as possible while giving you a good amount of food."

Monaghan agrees that those low prices, topping out at $7, are key to the Dewans' success. "We don't want to be too exclusive. We want to get the local folks to try it. A lot of us haven't had Nepali food before. I hadn't," he says.

Some customers have encouraged Raymond to leave Morrisville for a larger city, perhaps Montpelier. He acknowledges that he might make more money elsewhere. But for now, he and Laxmi are committed to staying put in the small-town gas station. "Morrisville has been incredibly friendly with us," Raymond says. "Everybody knows us." And they know where they can get a spicy weekday feast — prepared by their neighbors.

The original print version of this article was headlined "Morrisville Momos"