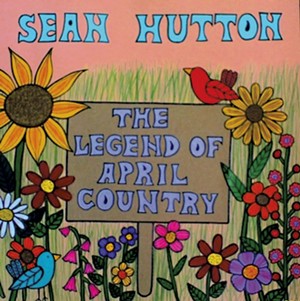 Not to get too "Twilight Zone" on you, but I think about the apocalypse and music collections all the time. My mind conjures all these images of little bunker bands keeping rock and roll or jazz or hip-hop alive while all the Mad Max shit goes down outside. (My "Weird Al" Yankovic collection is going to be like gold, man.) I mean, what a noble fate, right? To be the person who doesn't let the urchin children of the dystopian future forget how great "Hey Jude" is? Sign me up!

That's sort of how Sean Hutton's new record The Legend of April Country comes across to me. The Burlington-based singer-songwriter has put together a love letter to that late 1960s California country-rock sound, full of Byrds worship and simple songs of love and nature. The album is an accurate-enough genre run-down that you could easily slot it on a library reference shelf or use it as a road map to get to Gene Clark.

The 12-string guitars and sweet harmonies of "So We Become Alive" put the record's origins right on the mantelpiece for inspection. Hutton, who has been a part of the Burlington scene since the '80s, when he'd make the rounds with his band the Trees, has a clear, evocative voice. In the studio, he uses it to build impressively sweet melodies, ringing with harmony. His lyrics are unerringly positive, indicative of a collection of songs suffused with a nostalgic sense of bohemian love and pastoral joy.

Even when the tunes take a turn from pop rock to more folk-leaning numbers such as "Woman Dove," Hutton is mostly interested in describing the beauty of his love. A recurring theme runs throughout The Legend of April Country, in which Hutton and the subject of his amorous songs are represented as bluebirds. "We Are Bluebirds" and "Bluebirds Together Always" are the only two songs with the bird in the name, but it keeps coming up, along with an assortment of other bird metaphors as the record progresses.

The musicality is crisp, and Hutton's songwriting and playing are equally professional. His love of that throwback Laurel Canyon sound is real, as is his ability to replicate it. There's no sense of reboot or a modern reimagining to the way he writes, and he's not ashamed to be direct about the simplicity of it all. "I just play the music from my heart / Music from my heart is what I play," he croons over acoustic guitar on "Nighttime Springtime."

Maybe it's because of my predilection for thinking in terms of some dark future, but the appeal of Hutton's sunshine-drenched songs makes a lot of sense. With all the strife of the modern world, a man singing love songs to his wife, sitting on a grassy hill on a summer night, seems rather romantic.

I think about wandering the dusty halls of my bunker in the future, wanting some song to evoke summer days or a girl's hair blowing in the breeze. I could go to my collection and pull The Legend of April Country down, put it on my precious record player and be completely satisfied. I have no idea whether that's something Hutton wanted to achieve with his new record, but, hey, mission accomplished nonetheless!

Stream The Legend of April Country on Spotify or buy it at CD Baby. And maybe start building a doomsday music collection while you're at it — just saying.